With the rise of equality empowered by the women’s rights movement during the past century, women are defining a prominent voice in defining American society.

Arab American women are among those who relate how they have overcome obstacles with the support of a growing awareness and recognition of women’s rights.

In their journey to equality, Arab women said they struggled against but overcame numerous obstacles from a variety of fields including social, educational, financial, and political to, most importantly, psychological empowerment.

Although Arab and Muslim women in the western world share the same sorrows and hopes, they have to carry an additional burden – fighting against other types of discrimination that are religious and ethnic based.

A survey conducted in 2017 by Pew Research Center about anti-Muslim discrimination showed that Muslim women were more affected by discrimination than men. Eight-in-ten women (83%) indicated that they have been discriminated against, compared to (68%) of their male counterpart. 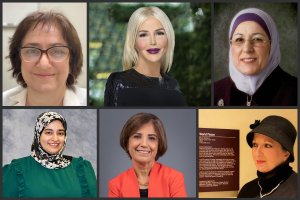 But the rise in prominence, they said has a price. Incidents of discrimination included being treated with suspicion, being called offensive names, being singled out by airport security or other law enforcement authorities, and facing physical threats and actual assaults.

Ms. Jihan Aiyash a Master of Public Health and director-at-large with the Michigan Public Health Association explained the challenges she faced as an Arab and Muslim American.

“As a visibly Muslim woman from a marginalized Arab ethnicity and being the first Yemeni woman to be elected into public office in Michigan, and only second in the nation, I learned pretty quickly how my intersectional identity impacted my ability to do my job,” Aiyash said.

“Unfortunately, I have been perceived as submissive, uneducated, and ill-informed. Thus, I had to know three times as much as the men around me to even be heard.”

Mrs. Nawal Hamadeh, founder and Chairman of Hamadeh Educational Services (HES) and many successful academies, also explained the challenges she confronts the most as an Arab and Muslim American.

“Although such discrimination did not stop me from continuing to be successful, it made my job unnecessarily more difficult. However, I stayed focused on providing quality education within a nurturing environment; making a difference within the community; and positively impacting the future generations’ lives.”

Artist and painter Ilham Badreddine Mahfouz also said that being an Arab -American Muslim woman she found herself obliged to playing a traditional role in home and with family, while also confronting male artists’ bias and self-centeredness.

Furthermore, after the tragedy of 9-11, Mahfouz decided to put an extra effort in peruse of promoting peace and confirming that Arabs and Muslims are of a peaceful nature. Mahfouz recently organized a Peace art exhibition in Detroit, Michigan which had great coverage and positive feedback. Eventually, her efforts flourished.

“Previously, I struggled to secure a venue for exhibiting my work, but with hard work and persistence I managed to build a network of relationships that enabled me to earn Americans’ trust and respect,” Mahfouz added.

On stereotyping issues, Dr. Leila Hajjar-Nolan, MD obstetrics & gynecology specialist at Henry Ford Medical Center in Dearborn, MI. explained that “there are a lot of pre-assumptions surrounding Arab women. Thus, it is a challenge to educate American health care workers about them. Unless a person understands the culture and traditions of the people, he/she serve, the delivered health care will be second-rate.”

Hajjar-Nolan added, “There is a lot of talk about unconscious bias in healthcare nowadays, and the challenge is to get the conversation going about the factors affecting care of Arab Americans,”

But is there a light at the end of the tunnel? Mrs. Joumana Kayrouz, a highly recognizable Arab American attorney based in Michigan explained, “No matter who you are, or where you come from, America will give you a chance. You can be a woman, a Muslim, an immigrant, or even speaking English as a third language. This country does not differentiate, and it is prepared to offer you an equal opportunity with others.”

Another success story is Mrs. Maha Freij the President & CEO at ACCESS that has worked on strengthening the voice of the Arab American community in American civil society, and successfully raised tens of millions of dollars for endowment building and various brick-and-mortar projects, including the first-ever Arab American National Museum in the United States.

Ms. Aiyash on the other hand, admits that “the road is long and paved with Islamophobia and xenophobia simply because you exist.”

Nevertheless, based on her experience, Aiyash encourages young Arab and Muslim women not to stop moving on that road. “We should be at the table in every professional setting. We are needed in classrooms, public office, healthcare, tech, and everywhere. The spaces will not change if we are not there to work on that change.” She stressed.

Mrs. Hamadeh, however, believes that being an Arab Muslim in America turned out to be an advantage as she was able to turn what was a negative experience to a positive successful one. She sends a message to the Arab American and Muslim youth saying

“Use the obstacles to challenge and motivate yourself; to set new goals that could help you and others alike; to move beyond and accomplish great things,” Hamadeh said.

Hamadeh advises them to be powerful, patient, focused, have integrity, and to remain humble when their goals are accomplished.

(Laila Alhusini is the CEO of US Arab Radio at US Chaam Media and ArabRadio.us. Email her at laila@usarabmedia.com.)