In D.C. on 8 August 2016, Grant Smith the director of the Institute for Research: Middle East Policy, filed this lawsuit in Federal court because U.S. aid to Israel has been illegal under our own laws passed in the 1970’s which prohibits aid to nuclear powers who have not signed the Nuclear Non Proliferation Treaty.

During investigations into the illegal diversion of weapons-grade uranium from U.S. contractor NUMEC to Israel in the mid-1970s, Senators Stuart Symington and John Glenn amended the 1961 Foreign Assistance Act to ban any aid to clandestine nuclear powers that were not NPT signatories, such as Israel.

The U.S. is finalizing a ten-year memorandum of understanding which will reportedly boost aid to $4-5 billion per year. The director of the Institute for Research: Middle Eastern Policy (IRmep) in the suit challenges the authority of the president and U.S. federal agencies to deliver such foreign aid to Israel. Such aid violates longstanding bans on aid to non-signatories to the Nuclear Non-proliferation Treaty (NPT) with nuclear weapons programs. Since the bans went into effect U.S. foreign aid to Israel is estimated to be $234 billion.

Excerpted from the lawsuit:

Israel has long had a nuclear weapons program and continually engages in activities which should trigger the cited provisions of Symington & Glenn [Amendments]. Among the most authoritative and complete recently released status updates about Israel’s nuclear weapons program was contained in Critical Technology Assessment in Israel and NATO Nations, a report chartered by the U.S. Department of Defense, prepared for the Office of the Under Secretary of Defense and presented in April of 1987.

The report was publicly released through an unnecessarily arduous Freedom of Information Act lawsuit before this court on February 10, 2015. The report revealed the advanced state of Israel’s program in 1987:

“The SOREQ and the Dimona/Beer Shiva facilities are the equivalent of our Los Alamos, Lawrence Livermore and Oak Ridge National Laboratories. The SOREQ center runs the full nuclear gamut of activities from engineering, administration and non-destructive testing to electro-optics, pulsed power, process engineering and chemistry and nuclear research and safety. This is the technology base required for nuclear weapons design and fabrication.”

Israel’s nuclear weapons facilities’ were essentially a scaled-down version of U.S. facilities says the report, “The capability of SOREQ to support SDIO and nuclear technologies is almost an exact parallel of the capability currently existing at our National Laboratories.”

Israel’s ambitions were not limited to simple gun-type Hiroshima bombs, but the most [powerful] nuclear weapons since Israel was according to the report “developing the kind of codes which will enable them to make hydrogen bombs. That is, codes which detail fission and fusion processes on a microscopic and macroscopic level.”8

Public knowledge of Israel’s possession of nuclear weapons blossomed in 1986 when an Israeli worker at Israel’s Dimona nuclear weapons facility, Mordecai Vanunu, smuggled out photos of underground nuclear weapons development which were published in the London Sunday Times.21

If you shut up the truth and bury it under the ground, it will but grow, and gather to itself such explosive power that the day it bursts through it will blow up everything in its way.– Emile Zola 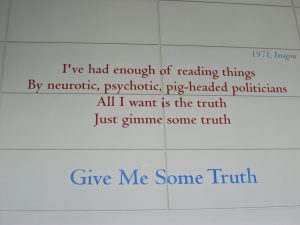 On 18 September 2004, in London, Yoko Ono awarded Mordechai Vanunu a peace prize founded in memory of and in the spirit of John Lennon’s “Give Me Some Truth.”

Ono also awarded $50,000 to New Yorker magazine correspondent and author Seymour Hersh, whom she described as “a staunch seeker of truth” for his investigative journalism.

Ono said the pair was honored as “people who have spoken out for the benefit of the human race by overcoming extreme personal difficulties and, in doing so, have allowed the truth to prevail. Hopefully [Vanunu] can come and receive the award himself. He did complete his sentence, it’s not as though he’s a criminal. The point is that it’s another statement, a statement that the whole world can share and think about. People power is stronger than the power of institutions.”

During my 2005 interviews with Vanunu he said:

The only way to peace is peace; the only way is non-violence. The only answer to Israeli nuclear weapons, their aggression, occupation and oppression, the wall and refugee camps is to answer them with truth and a peace-full voice. When I became the spy for the world I did it all for the people of the world.

The USA needs to wake up and see the truth that Israel is not a democracy unless you are a Jew. Israel is the only country in the Middle East where America can right now find WMD’s. America can also find where basic human rights have been denied Christians, right here in Israel…

View my first two questions to Vanunu regarding his Christianity and WMD in the Middle East:

On Thursday Israel’s Foreign Ministry’s director general banned all Israeli diplomats in Israel and abroad from having contact with Israeli journalists in the wake of a Haaretz report regarding the Arab states NOT seeking a vote regarding Israel’s nuclear arms at next month’s International Atomic Energy Agency meeting in Vienna.

The Arab states, led by Egypt, have been advancing resolutions on Israel’s nuclear facilities nearly every year since 1987. During this decade alone, a vote on such resolutions was taken in 2010, 2013, 2014 and 2015.

Over the last three years Israel foiled the resolutions by recruiting more and more countries to vote against them.

Israeli and Western diplomats dealing with the matter believe that there are two reasons for the decision not to advance a resolution on Israel’s nuclear weapons.

The first is the fact that the Arab states have failed to gain a majority for the resolutions in recent years. “They simply understand that they’ll lose and they don’t want to be humiliated again,” said an Israeli diplomat.

The second reason, they said, is the dramatic warming of relations between Israel and Egypt, which has always been the country spearheading this issue….

From June 2005 until March 2015, this reporter had been spearheading the cause for Mordechai Vanunu’s human rights and to end USA collusion in Israel’s nuclear deceptions.
On March 30 2015, Vanunu fired this reporter as a supporter and ended the Petition to World Media and Israel: We are not free, until Vanunu is free! at 10,057 signatures.

In 2004, a writer and Vanunu were in the garden restaurant at the American Colony working on his autobiography.

However a Palestinian spy turned them in and the authorities threatened to arrest them both.

Israel also threatened Vanunu with more jail time if he dared to seize his right to free expression by publishing anything without going through Israeli censors!

This reporter never went through Israeli censors, but I have enshrined everything of importance Vanunu told me HERE  seeking to end USA collusion in Israel’s Nuclear Deceptions.

My money is on Grant Smith’s nuclear lawsuit wrapping that mission up!

Please view Part 1 of this reporters June 2005 interview with Mordechai Vanunu: The SPY for We the People