Sabeel is one of the most common words in the Quran, mentioned over 160 times.

Sabeel is also an international peace movement established in Jerusalem by Palestinian Christians seeking a just peace in the Holy Land as defined by international law and United Nations resolutions.

During my second [of eight] Reality Tours through the West Bank [since 2005] I was introduced to the Sabeel Ecumenical Liberation Theology Center’s Contemporary Way of the Cross.

The Sabeel way, transforms the traditional Christian tradition of meditating upon the journey that Jesus trod carrying his wooden cross to his death; with an updated meditation on empire and occupation.

For many Christian churches, Palm Sunday is referred to as “Passion Sunday” and it marks the beginning of Holy Week, which concludes on Easter Sunday.

They tell the story of when Jesus entered Jerusalem and the crowds greeted him waving and covering his path with palm branches.

The story goes that immediately following that triumphant celebration Jesus begins his tortured journey to the cross.

The Stations of the Cross (or Way of the Cross, Way of Sorrows, or just The Way) depict Jesus carrying the Cross-in the final hours or “Passion of Jesus” before he died.


In the Old City of Jerusalem there are fourteen plaques along The Via Delarosa hanging on the walls of ancient stone buildings depicting where Jesus may have fallen three times, meets his mother, is stripped, nailed and dies.

Sabeel’s Contemporary Way of the Cross suggests fourteen reflections beginning with 1948, The Nakba:

The Catastrophe which followed the failure of the UN partition plan of ‘47 when the Irgun and Stern Gang [Zionist terrorist groups] depopulated over 400 villages and forced 726,000 Palestinians to seek refuge in Lebanon, Syria, Jordan, and Egypt.

Station Two of the Sabeel way of the Cross-reflects on those refugees and the 460,000 more that fled during the War of 1967.

There are over 675,670 registered refugees in the West Bank, 938,531 in Gaza and over two million in Arab countries who have never received compensation and are still denied the right to return to their homeland as guaranteed in Articles 13 and 15 of The Universal Declaration of Human Rights and in UN Resolution 194.

During one of my Sabeel Reality Tours we took a short bus ride from the Old City of Jerusalem into the lush green grounds of the Pizgatzeev settlement.

All of Israel’s settlements are illegal under international law.

I was sick at heart and in my gut as we rode less than a mile into the colony as I counted three playgrounds and two swimming pools. I wondered how many USA tax dollars and Christian churches helped build them.

My Sabeel group rolled out of the bus to pray near a playground but facing the Anata refugee camp where we had been ten minutes prior.

As we began to pray a gunshot issued from Anata and then another and another in rapid succession.

I was told that the Israeli Forces were showering the refugees with gunfire at that moment because school was letting out and that terror was a ‘normal’ daily occurrence for the children of Anata!

I lost it completely and sobbed uncontrollably, feeling like the Magdalena when she could not find her Lord.

Then I thought of Jesus, and how he cried buckets of tears as he “approached Jerusalem and saw the city, he wept over it.”-Luke 19:41

Jesus is quoted in Matthew 23:37: “O Jerusalem, Jerusalem, you who kill the prophets and stone those sent to you, how often I have longed to gather your children together, as a hen gathers her chicks under her wings, but you were not willing.”

About an hour’s walk from the Old City of Jerusalem lies the little town of Bethlehem in the occupied state of Palestine.

During a July 2007 visit to Bethlehem, I met Bethlehem born Rev. Dr. Mitri Raheb, the Pastor of the Evangelical Lutheran Christmas church in Bethlehem.

Raheb spoke with such fierce urgency, I can still easily recall him standing in front of me saying:

We are not spectators, we have a role to play…we are nonviolent but I have problems with nonviolence; people from abroad come here and give us sermons on nonviolence and I appreciate it, but why don’t they preach nonviolence to Israel and America?

It’s a miracle that the Palestinians are so nonviolent in spite of the abuse we live with on a daily basis. If you lived here every day you would get fed up too.

The world assumes it is the Palestinians who are the violent ones, but nonviolence is who we are. If you operate in a system of violence you will also be violent when you go home.

Where do you think Hamas learned to torture? In Israeli prisons from their captors!

There is no way to end the violence without first ending the occupation!

Our Palestinian government was boycotted for a year and a half by America and the EU: this is violence!

As long as the violence is exercised against us that is OK with the world. When the Presbyterians talked divestment the Zionist rose up and said ‘you can’t do that!’

I started interfaith dialogue in 1985 because Christians should not be islands and you don’t dialogue just with yourself, you must dialogue with the other.

The biggest temptation for the church is to stay within their walls and only be dedicated to their own members; which leads to a dead church.

We are called to go out, and we do not just preach with words, people here are fed up with words; they hear one thing and see another with their eyes.

Fifty million American dollars went to build the checkpoints to ‘make our lives easier’ we were told, but these checkpoints and terminals are not for people, they are for cattle!

We have too much religion and it suffocates us! If God would speak today he would say, ‘I am fed up with your religion!’

The more religion there is; the less spirituality…

The Christian EXODUS from the land many call Holy, which is in pieces that were called Bantustans in apartheid South Africa, has rendered the number of Christians from 20% of the total population to less than 1.3% since 1948.

Their dwindling numbers are due to low birth rates and their escape from the USA policies that enable and sustain the Israeli military occupation of Palestine.

Many American Christians visit Israel but never meet a Palestinian Christian, who are their sisters and brothers in Christ.

In the gospel [good news] story told in Mark 3: 31-35, the mother of Jesus’ and his brothers arrived at a house where he was teaching.

Standing outside, they sent word to Jesus to call him out.

The crowd around Jesus told him, “Your mother, sisters and brothers are outside asking for you.”

Jesus replied, “I am here with my mother, sisters and brothers. For whoever does the will of God is my brother, sister and mother.”-Mark 3: 31-35

700 years before Jesus, Micah rebuked Israel because of dishonesty in the marketplace and corruption in government.

In his early prophecies, Micah predicted the destruction of Samaria and Jerusalem for their respective sins.

The Palestinian Authority and the international community do not recognize the term “Samaria” but the territory is understood to refer to part of the West Bank.

Micah warned the people of pending destruction if their ways and hearts were not changed and he summed up best in Micah 6:8: “What does God require? He has told you o’man! Be just, be merciful, and walk humbly with your Lord.”

Merciful is to have, feel and show compassion, that sense of viscerally feeling the pain of another and being moved to help.

Being humble is knowing yourself-the good and the bad-for both cut through every human heart.

And FREE WILL means we get to choose which rules ours. 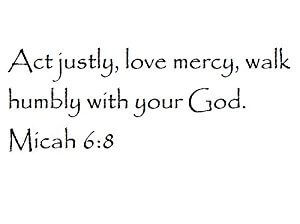 The Balfour Declaration and Brother Harold