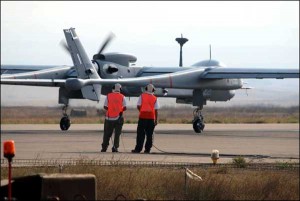 In another sign of the increased cooperation and strategic military alliance between Israel and Jordan, news reports said that Israel will supply Jordan with two types of drones to help Jordan fight the Islamic State in Iraq, ISIS OR ISIL.

An Israeli defense website reported last week that a joint Jordanian-Israeli command and control war room is currently leading the air campaign against ISIS from a base in northern Jordan. The Arab Daily news could not verify this information at this point.

Sources in the Pentagon, however, who did not wish to be identified for this story told the Arab Daily News that the Israeli drones will help Jordanian Special Forces currently fighting ISIS in Iraq and supporting the US troops on the ground there. A total of 12 Israeli-made UAVs will be delivered to Jordan in the near future.
The Arab Daily News reported last year that brigade strength Jordanian Special Forces has been fighting ISSI in Iraq while wearing Iraqi and Kurdish military fatigue.

In an interview with CBS’s 60 minutes last year King Abdullah II commented on the threat ISIS poses to his country and Jordan’s efforts to confront that threat saying that “We have retaliated to several contacts over the past several months to those who have come across our borders or tried to come across our borders. So we have been somewhat aggressive to make sure our borders are defended.”
Jordanian Special Forces are one of the best trained in the region and have been carefully designed to deal with different aspects of terrorist threats whether hostages rescue, or capture and kill operations. Jordan also trains regional forces on special operations in its US-funded and managed King Abdullah Special Operations Training Center KASOTC .

According to the magazine, the Heron TP was “first entered service with the Israeli Air Force in 2010, and is the service’s largest and most sophisticated UAV with a wingspan of 26 m and an all-up weight of 4,650 kg. With a stated operating altitude of 45,000ft (although it is believed it can fly higher), the Heron TP is reported to have a 40-hour endurance. Although the Heron TP’s range figures have not been disclosed, the platform’s satellite communications (SATCOM) enable over-the-horizon operations.
In terms of its payload, the Heron TP has recently been cleared to carry the IAI (Tamam) M-19HD electro-optical sensor turret, which includes zoom and spotter high-definition (HD) day cameras; an HD infrared (IR) zoom camera; laser designator; laser rangefinder; laser pointer; near-IR laser illuminator; electron-multiplied charge-coupled device (CCD) camera; and short-wave IR camera.”
It is worth noting, meanwhile, that Israel is increasingly involved in the fight against ISIS through supplying its close ally Jordan with all kind of high tech weapons systems especially electronic mentoring systems.

Also last month, Israel supplied Jordan with its retired Cobra helicopters after the US performed the necessary overhaul and updates. The Arab Daily News also reported that Israeli fuel tankers refueled Jordanian F16s Mid Air on their way to the US to participate along with Israeli F15s in Red Flag military exercise at Nellis Air Force Base North of Las Vegas Nevada.