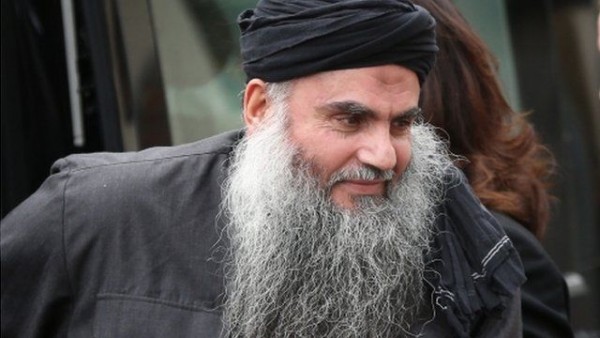 Jordanian intelligence agents detained the 23 year old son of well known anti-ISIS Salafist, Sheikh Abu Qatada at his home on Tuesday after a book review study at the Sheikh’s house.

Abu Qatada told the Arab Daily News that his son Qatada was detained by men who only identified themselves as Jordanian “state security agents”. He maintained that his son committed no crime to warrant his detention and arrest by the Jordanian authorities.

The sheikh also said that the agents took his son’s computer and camera that was used to video tape a book review session held every week at the Sheikh’s house and streamed live online.
Qatada was detained immediately after the study was over in the evening.

“Qatada’s only crime is that he is my son.” Abu Qatada told the Arab Daily News from his home in Amman area.
Abu Qatada is one of the world’s highly respected Jihadist theorists and ideologues who often speaks out against the “Islamic State in Iraq and the Levant” or ISIS calling the group as “the dogs in hellfire” and urging young Muslims against joining the group.

He also calls ISIS an “Extremist deranged group” and a “murderous organization”
The Sheikh holds a weekly book review study at his house in which he discusses books and authors on many different subjects and topics.

Some of the book reviews sessions include for example the works of well-known secular and religious Arab and Muslim thinkers such as Taha Hussein, George Tarabishi and Mohamad abed al Jabery. He also discusses western authors on subjects of philosophy, history and the Middle East.

“The subject of Tuesday’s session was about explaining verses from the Quran” he said.
Abu Qatada also said that he still does not know for sure who detained his son, and where did they take him. He added that no one came forward from the Jordanian government to tell him where his son is or why he was being detained.

Qatada who grew up in Britain was recently married and currently studying Islamic law at the University of Jordan. He is not known to have made any public pronouncements or intervened in any political debate or to discussed religious matters in public.

Several sources in Amman told the Arab Daily News that Qatada was most likely detained and held by the Jordanian General Intelligence Department (GID). The GID is known to arrest Jordanian citizens who are suspected of committing acts deemed a threat to national security of Jordan without an arrest warrant and in many cases imprison them often for many years without trial or due process of the law.

Abu Qatada said he was not distraught over his son’s detention because he said that his son is being punished for his belief in his religion which is something honorable, not for a crime of ill repute.

on how he feels about the arrest and detention of his son, Abu Qatada told the Arab Daily News “My son is not better than other Muslims who are suffering greater and horrific tragedies of being bombed and murdered in Syria and elsewhere in the Muslim world.”

On his twitter account Abu Qatada wrote “Jordanian state security agents took my son Qatada from his house, O’ Allah grant him and other Muslims freedom from imprisonment “

Abu Qatada lived in Britain for many years and was suspected to have ties to International terrorism and al Qaida. In 2014 interview with the Arab Daily News, he denied that he ever had ties or pledged allegiance to Al Qaida or or its leader Osama Bin Laden.

In 2000 Abu Qatada was accused of masterminding plots to carry out several terror bombings in Amman known as the Millennium bombings. His lawyers in Britain where he was being detained and in process of extradition to Jordan argued successfully that the confessions by witnesses against him in Jordan were gained through torture. Several British judges agreed that the evidence against him was extracted through torture and it was “extremely thin evidence.”
The European Human Rights Court also agreed with Abu Qatada’s attorneys and rendered all confessions and the evidence against him inadmissible in court. This ruling, therefore, prohibited the British government form extraditing Abu Qatada to Jordan based on the discredited witnesses statements that were key to his conviction in Jordan in the first place. After an agreement between Jordan and Britain to grant abu Qatada a new trial in Jordan without the torture-base evidence Abu Qatada was extradited to Jordan in 2013. He later was found not guilty of all the charges against him.