Pro-Israel bullying on college campuses is so unAmerican 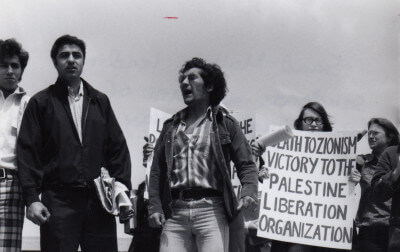 When I was in college in the early 1970s, the world wasn’t much different than it was today. Today’s conflicts in the Middle East were matched by conflicts in Eastern Europe. Today’s “Arab Spring” was replaced back then by the Cold War. Today’s wars in Iraq and Afghanistan were matched by wars in Vietnam, Cambodia and Thailand.

Americans were united against the Communist oppression in Eastern Europe, but lived in fear of Russia using the atomic bomb, and the growth of China as a “Big Brother” nuclear nation.

(Photo: 1976, members of the Arab Student Organizations at the University of Illinois at Chicago protest against the discrimination against Arab student groups there, and against Israeli policy in Palestine. Photo credit. Ray Hanania. From the book “Arabs of Chicagoland, 2005, Arcadia Publishing)

Freedom in America then was in jeopardy just as freedom is in jeopardy again today in America. The government was spying on citizens and keeping files on “activists.” The administration of paranoid President Richard M. Nixon was obsessed with controlling and neutralizing the voices of the anti-war movement which demanded that American soldiers be withdrawn from Vietnam.

The anti-war movement and the push for Democracy and freedom in Europe found its spark on campuses across the United States. That’s where the anti-War movement began. Student protests sounded a clarion call for freedom throughout Eastern Europe. They wanted to end the war in Vietnam. They wanted people to be free. They fought for civil rights for African Americans and wanted corrupt politicians charged with crimes, not given golden parachute retirements.

That student protest movement represented American rights. The freedom to speak out against tyranny whether it was in East Berlin on the other side of the Berlin Wall, or in the Gulags of the Soviet Union. 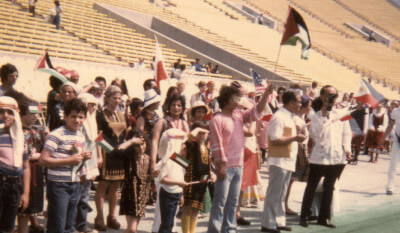 Yet today, that student movement has been targeted. Freedoms are being compromised and denied. Government bullying has been embraced by university administrations driven by political agendas.

The student protests today are targeting the same exact issues that were targeted during the student protests of the 1960s and 1970s. Today’s protesters want the Israeli Wall taken down, a wall that imposed an Apartheid-like racism against victims solely because of their religions, being Christian and Muslim.

The student protests today are targeting the unjust wars that took place in Iraq, and American hegemony across the world, and a U.S. Foreign policy that is funding an occupation that has put tens of thousands of civilians in a new Gulag in the Negev Desert and throughout the Israeli occupied West Bank.

What Israel is doing is an outrageous violation of international law and runs contrary to the fundamental principles that serve as the Constitutional foundation of America.

Yet, pro-Israel activists have their tentacles entrenched at the controls of many government agencies and at many universities. Although the student protests of today parallel the righteous student protests of the 1960s and 1970s, today’s American power elites are doing the same things to strangle free speech.

Recently, two American Congressman, Peter Roskam and Dan Lipinski, who’s 3rd Congressional District represents one of the top districts in terms of American Arab population, have introduced a law that would punish any American organization that protests Israel’s violations of human rights and international law by denying federal government funding to that American group. Ironically, these same congressmen have voted to give Israel $5 billion a year in federal grants and loans taken involuntarily from the pockets of American taxpayers. 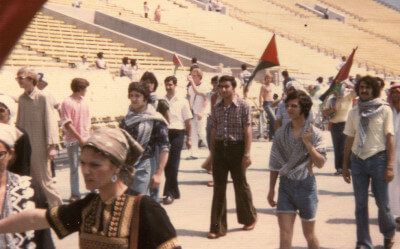 The idea that a boycott of Apartheid South Africa, or Eastern Europe for oppression is unfathomable. Yet that is exactly what Roskam and Lipinski are doing in today’s new world of tyranny and the suppression of American freedoms.

Worse is the bullying and intimidation taking place at Northeastern University in Boston where student protesters with the Students for Justice in Palestine (SJP) wanted other students to know what it is like to be evicted from your home and property for no reason as is being done today in Israel and Palestine, oftentimes using American taxpayer funding. The students handed out fake “eviction notices” to students under their dormitory doors. It’s an ingenious strategy to raise awareness for Christian and Muslim civilians who are being brutalized by Israel’s terrorist military, a military that Amnesty International has denounced as being “trigger happy” in a recent study that also concludes Israeli soldiers are intentionally targeting, shooting and killing children protesters.

Northeastern University has suspended the SJP student chapter there and have brought two of the members up for charges. Talk about a revival of McCarthyism in America.

When I was a student at Northern Illinois University, we protested and rallied often against the Vietnam War. We took over administration buildings. Had sit-ins. Distributed flyers and burned draft cards and even the American Flag in protest to demonstrate that the America that bullies and oppresses is not the American symbolized by that wonderful beautiful Old Glory. As students, we exercised our right of free speech. Eventually, through open discussions, the debate enlarged and expanded. In my case, I eventually enlisted in the U.S. Air Force rather than be drafted into the U.S. Army. I served tow years active duty, protesting the war in my own way, but also defending our soldiers against extremists who took good causes too far. There is a middle ground. 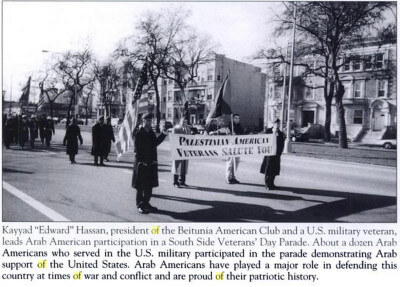 When I got out of the military and returned to college, the war had come to an ugly conclusion with American soldiers chased out of Vietnam. Many Americans disrespected and hated returning Vietnam Veterans, calling us names. There was a shame that swept America for its unethical and illegal conduct in Vietnam, conduct that parallels the same actions taken today by Israel against Christian and Muslim civilians. But Americans cast that shame on their soldiers.

At the University of Illinois at Chicago, where I returned to classes with a new energy in political science and journalism, I joined the Arab Students in protesting Israel’s violence and terrorism, and the bias in the mainstream American news media. We protested, rallied and even tried to occupy college administration buildings.

We found that the University was under the control of pro-Israel activists. It was so bad that the professors routinely denied funding to our organization, and refused to recognize Students for Palestine. We were only allowed to organize as the Arab Student Organization, of which I served one year as President. The University was biased. It gave the pro-Israel organizations all the funding they wanted to organize rallies, events and pay to bring speakers to the campus that championed Israel’s lies. The same University of Illinois at Chicago refused to give funding to Arab organizations and created roadblocks and obstacles as we tried to protest and demand our fair share. 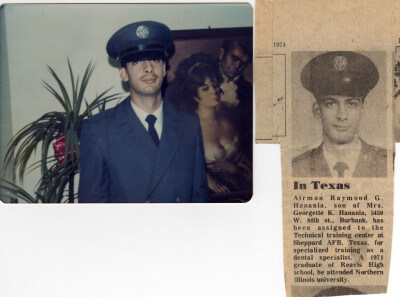 College life in the 1970s was ugly, driven by vicious anti-Arab policies embraced by colleges and universities across America. Pro-Israel activists supported protests and boycotts against Arab groups, and were instrumental in getting the United States to pass a law making it illegal to boycott Israel.

Israel has been the only time when Americans have been forced to set aside their freedoms to protect, and fund, a foreign nation engaged openly in brutality, oppression and violence against civilians.

Our Arab student movement faced the same problems that are faced today. We were divided. Fanatics and extremists in the Arab community wanted to do more. And those fanatics made it easy for the government to paint all Arab students and activists as being “anti-American.” The Arab haters used the fanatics as a basis to adopt all kinds of policies to deny equality to any American Arab who dared to speak out against Israel, a foreign country.

The mainstream news media was worse, ignoring the violence and discrimination against American Arabs, while exaggerating and falsifying acts of discrimination against pro-Israel groups. Many in the media were openly pro-Israel and they were unashamed in compromising their journalistic ethics and professionalism to twist facts to defend Israel and excoriate American Arabs.

That’s one reason why I forced myself into the ugly, biased world of the mainstream news media, to learn the strategies of communications and to fight from within the system to change. Not enough American Arabs followed me, but the trickle of Arabs entering journalism is increasing slowly.

One day it will change and America will be a truly Democratic and free country. But as long as America stands by silently as bullies target other American citizens in order to defend and protect a foreign country, Israel, this nation is as bad as any tyranny and dictatorship. It’s a selective discrimination and tyranny. But you cannot claim to be a true Democracy that is free if a part of your society is imprisoned by oppression.

(Several photos from the book “Arabs of Chicagoland” by Ray Hanania. 2005. Arcadia Publishing.)