After nearly a year of silence, Israel’s Nuclear Whistleblower Mordechai Vanunu, ‘spoke’ on Wednesday through the uploading of Freedom Now First at his YouTube Channel.

Vanunu adds no description, explanation or translation to the nine-minute Israeli TV report which aired on 23 May 2010, just prior to Vanunu returning to 78 days back in solitary confinement because he spoke to foreigners who happened to be media in 2004.

Vanunu can be heard at 2 minutes 23 seconds delivering his “Freedom of Speech” speech in English.

At 5 minutes 15 seconds, Vanunu directly addresses “Mossad, Shabbak, Stupid Spies” regarding his human rights and the fact that the World has known about Israel’s WMD since 1986 when he provided the photographic proof and told London’s Sunday Times all he knew in his position as a mid-level technician on the night shift within Israel’s 7-story underground WMD Facility at Dimona. 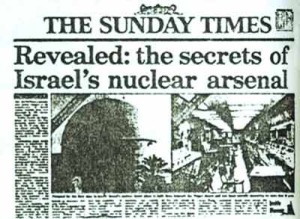 As of this writing twenty-two comments have been posted HERE

The first comment reads:
As far as this American knows Vanunu should have heard weeks ago on his recent appeal to leave ‘the only democracy in the Middle East’ is he free enough to say what’s the hold up?

Vanunu has not yet replied.

However, Vanunu has said:

“All the secrets I had were published in 1989 in an important book, by [Nuclear Physicist] Frank Barnaby, ‘The Invisible Bomb: Nuclear Arms Race in the Middle East.'”

In 1986, Barnaby was hired by the London Sunday Times to vet Vanunu’s story and he testified at Vanunu’s closed door trial:

“I found Vanunu very straightforward about his motives for violating Israel’s secrecy laws he explained to me that he believed that both the Israeli and the world public had the right to know about the information he passed on. He seemed to me to be acting ideologically. 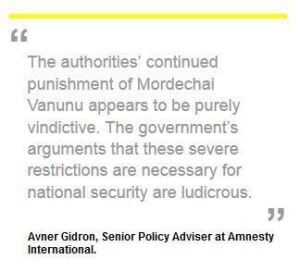 Because Vanunu’s habit has been to holds comments for moderation at his YouTube Channel, the fact that he is allowing comments to post automatically at Freedom Now First

This American who dissents from USA collusion in Israel’s Nuclear Deceptions sees it as a GIFT for it establishes yet another cyber trail of truth as Vanunu spends his days in east Jerusalem or Tel Aviv being harassed or ‘befriended’ by “stupid spies” as he waits on another delayed response from Israel to end the restrictions denying his right to leave ‘the only democracy in the Middle East’.

Vanunu’s phone number and email address are posted on his website as is his May 2013 message:

I am now visiting with foreigners. I am ready to meet anyone who is coming here.

When I last saw Vanunu in November 2013, he told me a reporter from CNN had recently asked him for an interview but Vanunu told him, “No, everything is already on the Internet.”

Sign and Share Petition to World Media and Israel: We are not free, until Vanunu is FREE!

Catch up on Vanunu’s 10 year struggle for his RIGHT to leave Israel in the FREE EBook, “The Vanunu Legend Israel’s Nuclear Whistleblower’s Struggle for Freedom”

Surge in destruction of Palestinian homes in Israel Arab World