Meryl Streep’s Speech at Sunday nights Golden Globes was a shot in the arm for democracy and an eloquent expression of dissent.

Thank you, Hollywood foreign press. Just to pick up on what Hugh Laurie said. You and all of us in this room, really, belong to the most vilified segments in American society right now. Think about it. Hollywood, foreigners, and The Press…

An actor’s only job is to enter the lives of people who are different from us and let you feel what that feels like. And there were many, many, many powerful performances this year that did exactly that, breathtaking, passionate work.

There was one performance this year that stunned me. It sank its hooks in my heart. Not because it was good. There was nothing good about it. But it was effective and it did its job. It made its intended audience laugh and show their teeth. It was that moment when the person asking to sit in the most respected seat in our country imitated a disabled reporter, someone he outranked in privilege, power, and the capacity to fight back. It kind of broke my heart when I saw it. I still can’t get it out of my head because it wasn’t in a movie. It was real life.

And this instinct to humiliate, when it’s modeled by someone in the public platform, by someone powerful, it filters down into everybody’s life, because it kind of gives permission for other people to do the same thing. Disrespect invites disrespect. Violence incites violence.

When the powerful use their position to bully others, we all lose.

This brings me to the press.

We need the principled press to hold power to account, to call them on the carpet for every outrage.

As my friend, the dear departed Princess Leia, said to me once, take your broken heart, make it into art.

My broken heart over my first trip to both sides of Israel’s Wall in Palestine led me to become an Internet reporter because:

The Industrial Military Corporate Media Security Surveillance Complex was NOT:

Reporting on the indigenous peoples non-violent resistance against Israel’s military occupation of their homeland;

Or about Mordechai Vanunu, Israel’s Nuclear Whistle Blower’s freedom of speech trial which began in 2006!

Because I DISSENTED over USA Government policies that endanger this homeland I ran for US HOUSE in 2012.

In 2016, my broken heart over how the democrats treated Bernie Sanders led me to cast a vote of DISSENT against the democrats, and as my conscience would not allow a vote for Trump, I voted Green last November.

In response to Meryl Streep’s speech [which did NOT mention him by name] Donald Trump TWEETED:

“Meryl Streep, one of the most over-rated actresses in Hollywood, doesn’t know me but attacked last night at the Golden Globes. She is a…..” 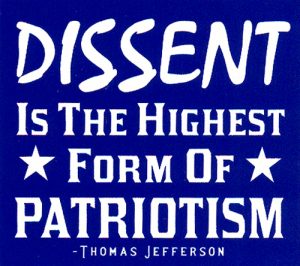 -Eileen Fleming, Senior Non-Arab Correspondent and Health Reporter for TADN, ran for US HOUSE in 2012 on a Platform that included ending federal regulations on cannabis, to establish every June 8 to be known as USS LIBERTY Remembrance Day, and to end USA collusion in Israel’s nuclear deceptions and military occupation of Palestine.

Lipinski, only one of 15 Illinois candidates to benefit from AIPAC American Arabs

Affaire d’État or Scandal, the Palace Is Boiling Abdennour Toumi