*FINAL UPDATE: On 10 May 2017, Vanunu tweeted Israel continues the restrictions against its nuclear whistle blower 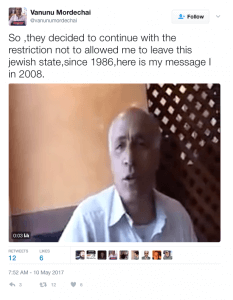 UPDATE April 19: Vanunu tweeted, “Next news coming soon we will hear if they continue all the restrictions…” [April 21 marks 13 years since Vanunu emerged from 18 yrs. behind bars] 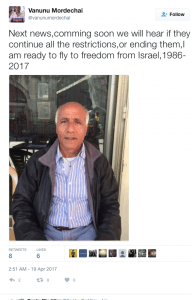 UPDATE April 12: Vanunu tweeted that on April 6th Israel’s Supreme Court rejected his appeal to end all the restrictions and allow him to leave Israel 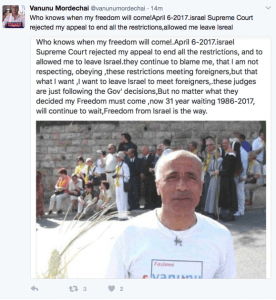 So Freedom did not come today ,but may be with the end of this case in court ,the freedom will come soon, Today in israel court ,about meeting foreigners ,the judge was going to give me some penalty for meeting foreigners, ( all this case is a big comedy ,and a very shameful to this jewish democracy.),the prosecutor want a short time prison, or a community service ,my lawyer want just a small fine as a penalty, the judge make it clear no prison term ,but he will decide next week.So the long way to Freedom continue very slowly. 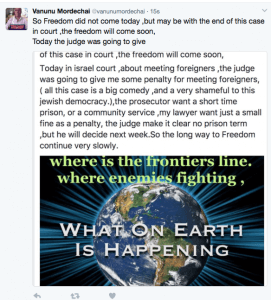 Vanunu Mordechai’s latest appeal to end the restrictions that have held him captive since he was ‘freed’ from 18 year behind bars on 21 April 2004 was to be ruled on weeks ago.

Not Free yet, continue to wait, without any news when this long time prison going to end,1986-2017,I am here ready to leave this israel prison any time,the latest news.
1.March 20 ,11:30 will be in court.
2.The supreme court delay its decision about all this case since Jan’ 30. 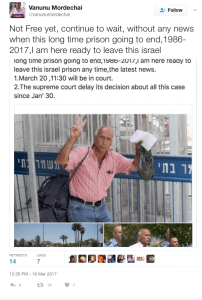 WHY Israel’s Supreme Court has delayed ruling on Vanunu’s latest appeal only Israel can say;

But thanks to Israel’s delay this reporter published:

Reply to Mordechai Vanunu Question for Netanyahu and Trump

So I won’t repeat myself here except to reiterate:

In 2005 I told Vanunu I would tell/WRITE his story UNTIL Israel allowed him to leave the state.

More importantly I vowed to God I would persist.

Only God knows how many times I have wanted to give up the thankless task.

And only God knows how much BS I have endured from Vanunu Mordechai and frustration over THE MEDIA’S FAILURE to report on Israel’s nuclear weapons.

Nevertheless I persisted because as Mother Teresa said: 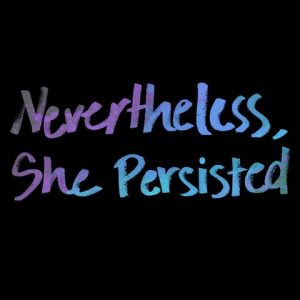 No matter if Vanunu is ever free to leave Israel:

This American writer CONCLUDES her reporting on Vanunu Mordechai with THIS REPORT:

Because EVERYTHING this American reporter wants and needed to say about Vanunu Mordechai is already all over the World Wide Web:

*UPDATES on the Vanunu saga will be garnered from Vanunu Mordechai’s twitter account because Vanunu “fired” this American as a supporter and “dismissed” her as a Reporter in March 2015.

Those details conclude this book: 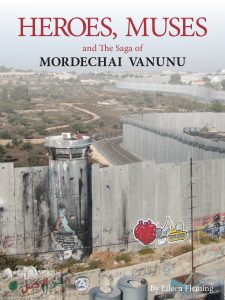 THIS AMERICAN  Producer of UNCENSORED  “30 Minutes with Vanunu”