A mix of political items involving mainstream American political candidates, and Arab and Muslim candidates and public officials. If you have news email it to former Chicago City Hall reporter Ray Hanania at rghanania@gmail.com.

Palestinian Professor Iyeman Chehade, who has a brilliant understanding of Middle East issues, is running for Congress in the new 3rd Illinois Congressional District, which has no incumbent. Word is that 36th Ward Alderman Gilbert Villegas is also running for that new congressional district seat.

Running for Congress is a tough challenge and requires at least one million dollars in campaign funding and high level of name recognition.

Congressman Jesus “Chuy” Garcia, who has been a champion of progressive issues and Palestinian American issues and who represents the old 4th District, is running in the 4th District as a result of remapping and new districts.

Marie Newman, who represented the 3rd District is running in the newly formed 6th District being challenged by Democrat Sean Casten of the far west suburbs. The new 6th district has some areas of the furthest western parts of Chicago’s wards and much of the suburban area of the old 3rd District.

Newman, who has been a champion along with Garcia of Palestinian human rights, while also supporting Israel’s right to exist, has faced two major challenges so far from, ironically, Palestinians. They are Rush Darwish, who spent more than $800,000 in campaign funds to win less than 6 percent of the 110,852 total votes cast — definitely a political embarrassment. 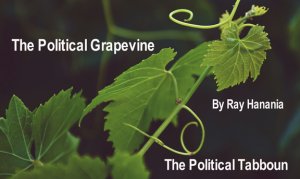 Chehade also filed a lawsuit against Newman asserting he was denied a job promised to him to stay out of the race in 2020 that Rush lost big time. That will be decide din the courts, of course. But it is ironic that Newman’s two biggest critics are Palestinians.

Cook County Board of Review 1st District Commissioner Tammy Wendt who defeated Dan Patlack for the office four years ago, was not included in the recent Democrat Party slating. Instead, Democratic Committeemen endorsed 12th Ward Chicago Alderman George Cardenas for the 1st District Board of Review. The Democratic Party endorsement of Cardenas was reluctant. If Cardenas is elected, all three candidates on the Board of Review are men, including Commissioner Larry Rogers Jr., of the 3rd District and Michael Cabonargi of the 2nd District. Not endorsing Wendt will be taken as a slap in the face of women voters.

Democrats also plan to dump Assessor Fritz Kaegi, a far left wing activist who won the office four years ago but has been criticized for screwing up the assessment process by pretty much every county elected official. Although he was “endorsed,” it is lukewarm and many Democrats will instead back Kari Steele, the president of the Metropolitan Water Reclamation District. Democrats didn’t want to vote against an incumbent Democrat, but Kaegi has not been making many friends.

Illinois Congresswoman Jan Schakowsky, a Jewish legislator who has firmly stood up for peace, justice and a Two-State solution for Israel and Palestine, is the co-sponsor of legislation that will require the State Department to create a “Special Envoy for Monitoring and Combating Anti-Muslim Bigotry.” It is also co-sponsored by Rep. Ilhan Omar (D-MN), who is Muslim and who was recently viciously attacked by Colorado Republican Congresswoman Lauren Boebert. Boebert made an Islamophobic racist joke about Omar and has refused to apologize for it, suggesting she is a “terrorist.”

The proposed law is modeled on the already existing position of “Special Envoy for Monitoring and Combating Antisemitism,” which was adopted by the U.S. House this week. It was endorsed by Americans for Peace Now which described the bill as “vital.” The bill is being advanced in the U.S. Senate by Senators Cory Booker (D-NJ), Benjamin Cardin (D-MD) and Bernie Sanders (I-Vt.). They introduced the Senate bill Tuesday.

Cristina Nonato who is running for the Metropolitan Water Reclamation District has a fundraiser Sunday Dec. 26, 2021 from 3 pm until 6 pm at Filipino Restaurant, 1130 N Northwest Highway, Park Ridge, Illinois. The minimum donation os $100 but you can donate more to help elect the first ever Filipino woman public official in Illinois. Make checks payable to Friends of Cristina Nonato, or donate online at VoteNonato.com. RSVP at 312-415-3942

A fundraiser is planned for Marie Newman Wednesday December 29, beginning at 6 PM at Ashton Place, 341 75th Street in Willowbrook.

(The Tabboun is a mix of political news and events and issues. If you have an item please email it to Ray Hanania at rghanania@gmail.com with a photo when possible.)