“Go read the newspapers about that”

About 51 minutes into this video Sam Husseini a D.C. based independent reporter and communications director of the Institute for Public Accuracy questioned Senator Chuck Schumer about Israel’s nuclear weapons arsenal:

Chuck Schumer: I didn’t get your question.

SH: Do you acknowledge that Israel has nuclear weapons, sir?

Chuck Schumer: I’m not — you can — go read the newspapers about that. [The Senator walks away from podium]

SH: You can’t acknowledge that Israel has nuclear weapons, sir?

Chuck Schumer: It is a well known fact that Israel has nuclear weapons, but the Israeli government doesn’t officially talk about what kinds of weapons and where, etc.

SH: Should the U.S. government be forthright?

Regarding Senator Chuck Schumer’s comment at the National Press Club for reporters to “read the newspapers” to learn of Israel’s nukes I laughed out loud being the reporter who has submitted multiple news-tips and letters to all editors at The NYT regarding the human rights struggle of Mordechai Vanunu, Israel’s nuclear whistle blower since meeting him in 2005 [while I was in east Jerusalem researching for my first historical fiction].

I always receive auto-replies from The New York Times but other than book reviews The NYT does not mention Israel’s nuclear weapons.

In a New York Times book review by Ethan Bronner published in 2010 [on Vanunu’s birthday October 13 -not Oct. 14 as Vanunu’s Wikipedia page insists] he writes:

Israel’s nuclear status had been widely assumed for years, but the specifics provided by the technician, Mordechai Vanunu — secret photographs as well as details of tritium production and plutonium processing — laid the groundwork for an intense international debate.

That debate occurred everywhere but in Israel. The Israeli news media were all over the Vanunu story: his defection and treason, his conversion to Christianity and his seduction and capture by a Mossad agent code-named Cindy. But they didn’t go near the policy implications. The prime minister at the time Shimon Peres, the man most responsible for building Dimona in the 1950s and ’60s, appealed to media chiefs, saying that the country’s security concerns far outweighed the public’s right to know. They did not need much convincing…

THE DEBATE that has never occured in ‘the land of the free and home of the brave’ is about our Made in the USA WMD and polices that collude in Israel’s nuclear weapons deceptions.

My meeting Mordechai Vanunu in 2005 was the catalyst for me to realize my childhood dream of being a reporter in the moment Vanunu tells me about the JFK, LBJ and Nixon connections to Israel’s nuclear deceptions. Read that story HERE

I last saw Vanunu in Jerusalem in 2013, and since a treasure trove of declassified documents about what the USA Government knew about Israel’s nuclear weapons dating back to the Eisenhower administration have been published and are now entwined with Vanunu’s saga HERE

In 1976, Mordechai Vanunu was twenty-two years old and needed a job on the night shift so he could attend university classes in the daytime.

Vanunu applied for a job at a “textile plant” which in reality was Israel’s Nuclear Research Center known as Dimona.

Vanunu was trained to be a nuclear plant technician beginning in 1977.

He quit on 27 October 1985, with $7,500 severance pay, a reference letter describing his departure as a layoff and two rolls of undeveloped film he had shot over a few harrowing hours inside of top-secret locations within Israel’s seven-story underground WMD facility in the Negev Valley.

Mordechai Vanunu was kidnapped by Mossad from Rome and after a closed door trial convicted of treason and espionage in 1986.

Nuclear Physicist Frank Barnaby was hired by London’s Sunday Times to vet Vanunu’s story [just before he was kidnapped by Mossad] and he testified at Vanunu’s closed-door trial:

“I found Vanunu very straightforward about his motives for violating Israel’s secrecy laws he explained to me that he believed that both the Israeli and the world public had the right to know about the information he passed on. He seemed to me to be acting ideologically. Israel’s political leaders have, he said, consistently lied about Israel’s nuclear-weapons programme and he found this unacceptable in a democracy. The knowledge that Vanunu had about Israel’s nuclear weapons, about the operations at Dimona, and about security at Dimona could not be of any use to anyone today. He left Dimona in October 1985.”

On 30 January 2017, Vanunu wrote at Facebook that the three Supreme Court judges were to rule “in a few weeks” regarding his latest appeal seeking to end all restrictions against him so that he can leave ‘the only democracy in the Middle East.’

As of this writing [ 7 PM in Jerusalem on March 3] the latest Vanunu has written at Facebook was on Feb 15.

Vanunu Mordechai February 15 at 11:52am ·We are now waiting for the Supreme court decision,it could be any time soon.and it could be good or nothing,so I am used too all this for 31 years,1986-2017.Freedom Must come. 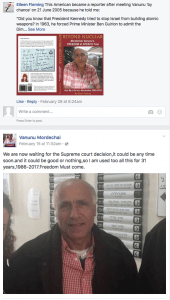 Until then spend “30 Minutes with Vanunu”