Why are we planning to walk across the DEMILITARIZED ZONE (DMZ) that separates North and South Korea?

Almost two years ago, when Christine Ahn proposed international women peacemakers walk across the De-Militarized Zone (DMZ) which separates North and South Korea as an important action to help support Korean women and men working for reconciliation and reuniting of Korean families, I couldn’t resist. This was an important first step in establishing a peace process in which women and civil community would be included. 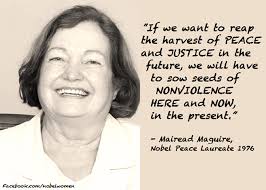 Although many hurdles must still be jumped, including affirming support from three governments—North Korea, South Korea and the United States representing the United Nations Command.

The UN command at the DMZ has said it would facilitate our crossing once South Koreas Government gives its approval —a small team of women are planning a historic walk of 30 international women peacemakers from twelve different countries to cross the DMZ on 24th May, 2015, International Women’s Disarmament Day.

Many people have asked ‘why are they planning to walk across the DMZ that separates North and South Korea.’?

Maybe the real question should be ‘Why not’!

In many countries around the world, women are walking and calling for an end to war and for a de-militarized world.

As the DMZ is the most highly militarized border in the world, women peacemakers believe it is only right, whilst working all their lives in their own countries for disarmament and demilitarization, that they should walk in Korea, in solidarity with their Korean sisters, who want to see an end to the 70 year old conflict to reunify millions of Korean families.

Seventy years ago, as the Cold War was being waged, the United States unilaterally drew the line across the 38th parallel—later with the former Soviet Union’s agreement—dividing an ancient country that had just suffered 35 years of Japanese colonial occupation.

Koreans had no desire or decision-making power to stop their country from being divided; now seven decades later the conflict on the Korean peninsula threatens peace in the Asia Pacific and throughout our world.

The international women recognize that one of the greatest tragedies arising out of this man-made cold war politics and isolation is the tearing apart of Korean families and their physical separation from each other.

In Korean culture, family relations are deeply important and millions of families have been painfully separated for 70 years. Although there was a period of reconciliation during the Sunshine Policy years between the two Korean governments where many families had the joy of reunion, but the vast majority remain separated.

Many elders have sadly died before reunion with families, and most are getting older now. How wonderful if the governments of both North and South allowed the remaining elders the joy and peace of mind of being able to meet, kiss and hold their loved ones, before they die. We are all wishing and praying—and walking—for this to happen for the Korean elders.

Also due to western sanctions and isolationist policies put on the North Korean people, their economy has suffered. Whilst North Korea has come a long way from the 1990s when up to one million died from famine, many people are still very poor and lack the very basics of survival.

During a visit to Seoul in 2007, one aid worker told me most people in South Korea would love to pack their car with food, drive an hour up the road, into North Korea, to help their Korean brothers and sisters if the governments would agree to open the DMZ and let them cross over to see each other! Many of us take for granted that we can visit family, and we find it hard to imagine that pain of separation still felt by Korean families who cannot travel an hour up the road, through the DMZ to visit their families.

We international women want to walk for peace in North and South Korea, and hope the Governments will support our crossing the DMZ, recognizing that we are seeking to do this because we care for our Korean brothers and sisters. We want to plant a seed that Korean people, too, can be free to cross the DMZ in their work to build reconciliation, friendships and trust and put an end to the division and fear which keeps them in a state of war instead of peace.

The DMZ with its barbed wire, armed soldiers on both sides, and littered with thousands of explosive landmines is a tragic physical manifestation of how much the Korean people have suffered and lost in war.

Yet from all my encounters with the Korean people, all they wish for is to be reconciled and live in peace with each other. In recognizing the wishes of the Korean people, I believe the political leaders of North Korea, South Korea, United States and all governments involved must play their parts to help Korea move from war to peace.

For the 30 international women who travel from over a dozen countries, we wish to go to Korea to listen to the Korean peoples stories, hopes and dreams, to tell them we love them, and join in solidarity with them in their work, and ours, in building a nonkilling, demilitarized Korea, Asia and World.

As mothers bear the loss of human life more acutely than anyone else, Julia Ward Howe [in 1870] wrote the first Mother’s Day Proclamation:

Arise then…women of this day!
Arise, all women who have hearts!
Whether your baptism be of water or of tears!
From the voice of a devastated Earth a voice goes up with
Our own. It says: “Disarm! Disarm!
The sword of murder is not the balance of justice.
Blood does not wipe our dishonor; nor violence indicate possession. At the summons of war let women now leave all that may be left of home for a great and earnest day of counsel.
Let them meet first, as women, to bewail and commemorate the dead.
Let them solemnly take counsel with each other as to the means
Whereby the great human family can live in peace;
Each bearing after his own time the sacred impress, not of Caesar;
But of God.
Learn More:

Nobel PEACE Laureate Mairead Maguire: NOT resting on her Laurels

Podcast: Arab radio on the Oscars, Census and more Activism