Wars are fought with many armaments. Some of them blow up. Others cause things to blow up. And still more can undermine entire nations simply with a few words.

In the Arab-Israeli war, the Arabs are losing. They have been losing for a long time, but they are losing even more, now.

And they are losing because they have failed to utilize one of the most important armaments in their arsenal. Communications. Words. Language. The ability to sway publics and even governments.

The war is in English and the Arabs are AWOL in that communications battle. They are missing from the fight, preferring to focus more on Arabic. And that should tell you what the problem is.

The Arabs focus on Arabic mainly because Arabic reflects who their real priority is.

Although the West, and especially the Americans, have the greatest outside influence in strengthening Israel’s extremist positions on settler expansion and the use of violence against civilians, the Arabs are more concerned about what their fellow Arabs think.

It’s the result of both fear and arrogance.

It is fear because the Arab World is government by tyrants, dictators, and oppressors and they worry that if they turn their back on the Arab people to focus on the English-speaking Western World, they will lose control. Their people might awaken, as they almost did during the short-lived and failed “Arab Spring.”

The Arab Spring was to bring Democracy to the Arab World. That never happened. Basically it allowed the tyrants to replace the old with the new. The concern is to prevent an awakening of the Arab mind and keep it oppressed with both political oppression and religious fanaticism. 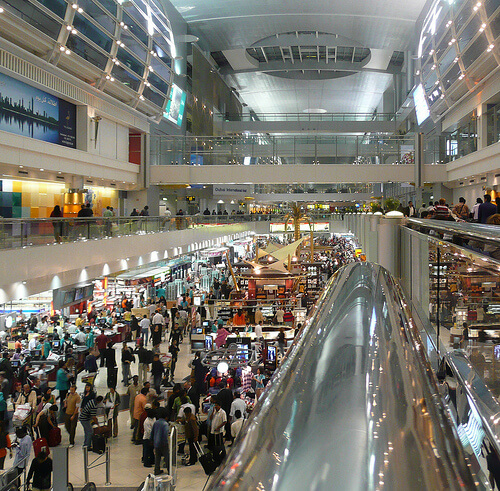 Modernization takes over int he Arab World, except in media, marketing and public relations. Dubai Airport. Photo by joiseyshowaa

It is arrogance because in the Arab mind, the English language is irrelevant. Arabs can’t understand how the “infidel” who speaks a tortured language that is fumbling and stumbling, can rule the world?

Arabic is a poetic and artful language, characteristics that embrace one important requirement that is also a flaw, emotion. You need emotion to really speak Arabic. Actually, you don’t “speak” Arabic. You sing it. And singing is all about emotion, which is why most Arab dictators, tyrants and oppressors tend to yell and scream for hours in their speeches, saying often very little of substance.

Arrogance prevents the Arab World from recognizing that the Arab-Israeli conflict is about the clash of cultures, the West versus the East. It is about English versus Arabic. It is about concepts of speech versus concepts of entertainment and control.

The Arabs think they can control the West through rhetoric, because it works on their own Arab people. They refuse to accept that emotional rhetoric and language extremism has the opposite impact on Western audiences.

That’s one reason why the entire public relations industry that has evolved in the Middle East is controlled by PR, Marketing and Communications corporations that have roots in the West, such as Ogilvy, Leo Burnett, and Publicis to name just only a few. And the native Arab World communications, marketing and Advertising agencies have been co-opted by the nurturing they have received from this Western media influence. All of the Arab agencies are really trying to be like those in the West, instead of seeking to define themselves in a way that benefits their agenda.

It’s one reason why magazines that deal with this communications, PR and marketing industry, like Campaign Middle East Magazine, tend to filter out any discussion or serious examination of the Arab-Israeli conflict.

Israel dominates the world of Communications and not only produces content in Hebrew, but also in English and in Arabic. The Israelis, unlike the Arabs, recognize that communications isn’t about what you say, but how you say it. They know that their first priority before speaking it to know who their target audience for a message is.

The absence of a homegrown communications industry in the Middle East is a natural consequence of a world where Free Speech and the mechanisms of Free Speech, such as Democracy, journalism and even public relations, are controlled by limitations imposed by the tyrants, dictators and oppressors.

Just look at the Communications products of this conflict. Israel and its pro-Israel network of satellite organizations and advocates produce an endless stream of press releases, creative Public Relations strategies and marketing and advertising spin.

In contrast, the Arab World produces almost nothing. There are only a few institutions that know how to write a press release in English: The Saudi Embassy, Qatar Airlines, AlJazeera ‘s water-downed American media venture, AlJazeera America, and, the American Islamic group CAIR, which isn’t really about the Arab World anyway. Just do a search of the top public relations services like PR News Wire, where Arab news is AWOL.

Maybe Campaign Middle East Magazine might consider addressing this in more than just an occasional, short column by extremist agitators.

Someone needs to tell the Arab World that they need to change their priorities. Stop trying to assuage the emotions and anger of the Arab people, and start trying to educate the intelligence of American and Western audiences.

Israel is doing it. And they are doing a damn good job of it. The Arabs? Well, like I said, they are masters of self-focus and arrogance. It’s all about them when it should be all about the target audience. And that target audience is English speaking Western and American.

Change how America views the Arab World and you will undermine Israel’s powers.

Ray Hanania is an award-winning Palestinian American columnist managing editor of The Arab Daily News at www.TheArabDailyNews.com. Follow him on Twitter @RayHanania. To find out more about Ray Hanania and read features by other Creators Syndicate writers and cartoonists, visit www.creators.com. COPYRIGHT 2014 CREATORS.COM

Rashida Tlaib still has a future in politics American Arabs

We The People of USA Palestine Israel American Arabs

Hi, my name is Chekib Khelil, and I am running for President Abdennour Toumi