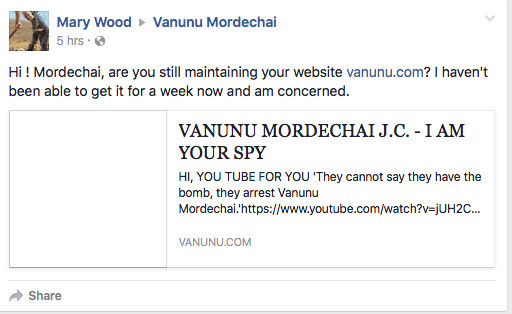 On Sunday ‘SamPhillips1948’ responded to a Wikipedia call at Mordechai Vanunu’s page for “additional citations for verification” under “Early and educational life” and “Disclosure, abduction and publication.”

Within minutes the quotes from Mordechai Vanunu posted by ‘SamPhillips1948’ were deleted and as Wikipedia has NOT replied to the following questions they follow here:

WHO is on the board that determines a reliable source? WHY is a direct quote from the actual source—Mordechai Vanunu—to an actual published author not considered ‘reliable’ by Wiki Editor? Has anyone at Wiki actually read the book this reader read to obtain the quotes from Vanunu?

I conclude this article with the quotes from Mordechai Vanunu that were posted at Wiki, including many more following a possible explanation for Wikipedia’s censoring of the most reliable source regarding Mordechai Vanunu which is himself! 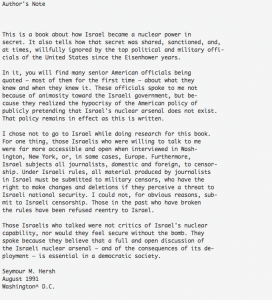 The Biblical story of Samson who kills himself and thousands of Philistines relates to Israel’s “Samson Option” nuclear strategy whereby Israel would launch a nuclear strike if they felt their state itself was being overrun.

According to The New York Times, Seymour Hersh relied on a former Israeli government employee who says he worked for Israeli intelligence for much of his information regarding Israel’s nuclear program.

Seymour Hersh did not travel to Israel to conduct interviews for the book as he explains in the Author’s Note:

This is a book about how Israel became a nuclear power in secret. It also tells how that secret was shared, sanctioned, and, at times, willfully ignored by the top political and military officials of the United States since the Eisenhower years.

In it, you will find many senior American officials being quoted — most of them for the first time — about what they knew and when they knew it. These officials spoke to me not because of animosity toward the Israeli government, but because they realized the hypocrisy of the American policy of publicly pretending that Israel’s nuclear arsenal does not exist. That policy remains in effect as this is written.

I chose not to go to Israel while doing research for this book. For one thing, those Israelis who were willing to talk to me were far more accessible and open when interviewed in Washington, New York, or, in some cases, Europe. Furthermore, Israel subjects all journalists, domestic and foreign, to censorship.

Under Israeli rules, all material produced by journalists in Israel must be submitted to military censors, who have the right to make changes and deletions if they perceive a threat to Israeli national security. I could not, for obvious reasons, submit to Israeli censorship.

Those in the past who have broken the rules have been refused reentry to Israel.

Those Israelis who talked were not critics of Israel’s nuclear capability, nor would they feel secure without the bomb. They spoke because they believe that a full and open discussion of the Israeli nuclear arsenal — and of the consequences of its deployment — is essential in a democratic society.

This American reiterates I was NOT a reporter UNTIL after I met Vanunu in 2005 and we began a series of interviews which concluded in 2010 with the publication of Beyond Nuclear: Mordechai Vanunu’s FREEDOM of SPEECH Trial and My Life as a Muckraker 2005-2010.

On 26 March 2006, Israel’s nuclear whistle blower Mordechai Vanunu told this American and inspired the taping of UNCENSORED “30 Minutes with Vanunu”:

Many journalists come here to the American Colony, from CNN and NY Times. They all want to cover my story, but their EDITORS say no…

CNN wants to interview me; but they say they can’t do it because they don’t want problems with the Israeli censor. BBC is doing the same thing.

Sixty Minutes from the United States from the beginning they wanted to do a program, but because of the censor situation they decide not to do it. Also big media from Germany, France, Italy, Japan. None of them wants problems with the Israelis.

‘SamPhillips1948’ did NOT copy and save the exact Vanunu quotes posted at Wikipedia; but a few of the quotes from Vanunu -and more-  follow as a Public Service. Excerpted from Beyond Nuclear: Mordechai Vanunu’s FREEDOM of SPEECH Trial and My Life as a Muckraker 2005-2010:

On 25 January 2006, Vanunu was convicted by the Jerusalem Magistrates Court of 15 violations of a military order that prohibited him from talking to non-Israelis and because he supposedly attempted to leave Israel by taking a cab to go from Jerusalem to Bethlehem to attend Christmas Eve mass at the Church of the Nativity in 2004.

The original indictment included 22 different violations; Vanunu was charged with 19 and acquitted of four. He was acquitted of speaking to foreign nationals on the Internet and via video and voice chats.

Although released in 2004, Vanunu has been held captive under the Emergency Defense Regulations, which were implemented first by Britain against Palestinians and Jews after World War II.

Vanunu replied, “The reason given is security but it is because Israel is not a democracy unless you are a Jew. This administration tells me I am not allowed to speak to foreigners, the Media, and the world. But I do because that is how I prove my true humanity to the world. My freedom of speech trial began January 25, 2006 for speaking to the media, the same day as the Palestinian elections.

“When I decided to expose Israel’s nuclear weapons I acted out of conscience and to warn the world to prevent a nuclear holocaust.

“The Israeli media demonized me, they published many lies about me and Israel kept me totally isolated in prison for most of the 18 years.

“I am also regarded as a traitor because I was baptized a Christian. My Christian conversion was also considered as treason and led to me receiving more time in jail than any murderer has ever served.

“The Israelis have this very beautiful article about freedom and liberty but they want to destroy anyone who criticizes them for revealing the truth to the world. The world must look and see what kind of democracy Israel is when one speaks out the truth.

“It’s very sad that Hilary Clinton went to the Jewish Wailing Wall and forgot the real crying wall is the Palestinian wall-the apartheid wall. The wall is not for defense, but to keep this conflict permanent. The people who need the help are the Palestinian Christians.

“Israel propaganda portrays all Palestinians as Muslim extremists and Hamas terrorists and neglect that Palestinian Christians are following the true message of Jesus Christ with nonviolent resistance. We need all Christians to come and see the true facts on the ground.

“The Dimona is 46 years old; reactors last 25 to 30 years. The Dimona has never been inspected and Israel has never signed the Nuclear Proliferation Treaty but all the Arab states have.

“Twenty years ago when I worked there they only produced when the air was blowing towards Jordan ten miles away. No one knows what is happening now.

“Israel is not a democracy, unless you are a Jew.

“Israel is the only country in the Middle East where America can right now find nuclear weapons. The Israelis have 200 atomic weapons and they accuse the Palestinians and Muslims of terrorism. The world needs to wake up and see the real terrorism is the occupation and the Palestinians have lived under that terror regime for 40 years.

“America can also find where basic human rights have been denied Christians: right here in Israel. The time has come for the United States to see the truth of Zionism. It began as a secular nationalist movement, not a religious one. Then some Christians believed that when Israel became a nation, it was the beginning of the second coming.

“They are deluded if they believe peace will come through atomic weapons. Atomic weapons are holocaust weapons. Christians should be the first people against them. We need all Christians to come and see the truth for themselves…”

The next day, Vanunu knocked at my door without any interference from the staff of the Notre Dame Center and I set up my new camcorder on a desk table in front of the only window in the room.

Vanunu and I argued over whether the curtain should be open or closed, I wanted all the light we could get, but Vanunu said no, and closed they stood.

We ran the tape until a light alerted us that we ran out of tape, but I still had more questions. We made plans to meet later for dinner at the American Colony. On the way we stopped in at the bookstore and on the shelf were two books about Vanunu. One written by Fredrik S. Heffermehl, a Norwegian lawyer and long time supporter of Vanunu who had cited one of my articles as a source!

But the book was written in Norwegian and as I don’t read it, I didn’t buy it. Instead I purchased Yoel Cohen’s “Whistleblowers and The Bomb: Vanunu, Israel and Nuclear Secrecy”, which Vanunu inscribed: “Tell my faith. Tell my story.”

…Another reason for this book is to set the record straight about many inaccuracies the media has reported, such as the legend that Vanunu flew to Rome from London with the Mossad, a victim of a “honey-trap” but the opportunity for sex already existed in London.

It was during that dinner after the taping of what became “30 Minutes with Vanunu” freely steaming at Youtube that I asked Vanunu, “What were you thinking of, when you left London for Rome with Cindy?”

Vanunu immediately replied and maintained eye contact the entire time as he stated, “No, it wasn’t like THAT! A tabloid paper published a story with some of the photos of the Dimona I had taken. They never contacted me for my side of the story but they published my photo with a bad report; lots of lies. I knew I was in danger and I wasn’t sure if the Times would still print my story. I thought I would just leave London with her for a few days. I trusted her…”

When Vanunu arrived in Rome at what he thought was Cindy’s sister’s home, he was clubbed, drugged, bound and transported back to Israel in either a small yacht or a cargo ship.

Just prior to being driven to his closed door trial, Vanunu had been inspired to write his Rome flight number and “HIJACKED” upon his palm and press it to the window of the van he was being transported in.

A photographer captured his inspired move and that led Peter Hounam, the journalist who broke Vanunu’s story to track down the Mossad agent who had entrapped him… [End book excerpt]

In January 2017, Israel’s Supreme Court was slated to rule “in a few weeks” on Vanunu’s latest appeal to end all the restrictions against him so that he can join his wife in Norway [the 60 yr. old Vanunu wed for the first time in May 2015] and the judges were to announce Vanunu’s sentence for speaking to two foreigners in 2013.

As of this writing the last Vanunu tweeted was on February 18:

We are now waiting for the Supreme court decision,it could be any time soon.and it could be good or nothing,so 1986-2017.Freedom Must come.

At Facebook on March 5, Vanunu responded to a Facebook friend inquiry asking for an update that there was:

“No news yet. Nothing to report!”

However on Monday a Facebook friend of Vanunu’s did report that Vanunu’s website has been offline for a week: 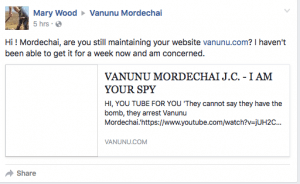 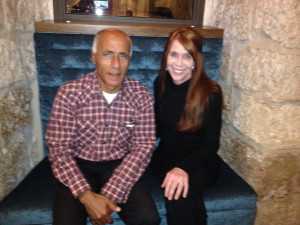