Fly Like an Eagle is a Song, an Album and a Calling

The song “FLY LIKE an EAGLE” from the album of the same name by the Steve Miller Band ranked second on the Billboard Hot 100 chart during the week of March 12, 1977.

As I reflected on this week in the era of Trump, the song “Fly Like an Eagle” rose up within me: 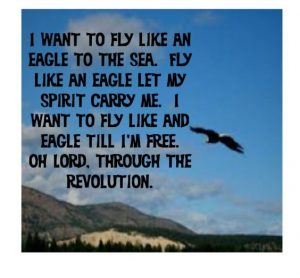 I also heard the song “Fly Like an Eagle” within my heart immediately after my very first close encounter with a Colorado Eagle on 11 September 2016.

It was around 7 AM and I was walking down a gravel road along side a six-foot high wood fence about ½ mile from the Flatirons Church and Herbal Wellness Cannabis Shop.

I had been praying for the USS Liberty veterans and in particular the event I was to deliver a few words at that afternoon. The Bolder Colorado Friends of Sabeel had invited Phil Tourney, a USS LIBERTY veteran and author to speak that afternoon, and the words I delivered conclude this post.

As I walked on that September 11 morning past hundreds of town-homes on my left, my gaze gravitated to my shadow reflected on the wood fence to my right.

I can still feel how warm my back felt under the cloudless Colorado sky when a few feet above my head a giant raptor flew over and landed on the fence about thirty feet in front of me.

The eagle’s head pointed directly at my face and I watched that bird of prey intently watch me as I walked towards it.

I flinched first, but not until I was directly alongside the massive bird by dropping my head.

I felt that bird watching me and I thought about looking back at it for about ten steps;

But then I felt a rush at my back and saw the shadow of its tremendous outstretched wings reflected on the pine wood fence.

The eagle soared then disappeared within seconds and the song “Fly Like an Eagle” welled up within me as I wondered if my close encounter with an eagle was a sign or a message of some kind. 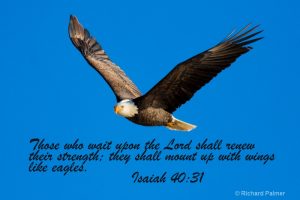 In “Fly Like the Eagle” by Trish Phillips we learn American history:

The Native Indians saw the Eagle as a symbol for great strength, leadership and vision. As if to seemingly mirror this, the eagle has been used as a ‘banner’ by many of the great empires throughout history, from Babylon to Egypt, through to Rome and even the United States.

In early Christianity the eagle was seen as a symbol of hope and strength, representing salvation. The eagle appears twice in the book of Revelation; both times in a context that suggests it is on the side of God. In Islam, the eagle represents warlike ferocity, nobility and dominion…

The Eagle conveys the powers and messages of the spirit; it is man’s connection to the divine because it flies higher than any other bird. The eagle brings the message of renewed life because it is associated with the east winds – the direction of spring, dawn and rebirth.

If an individual has been going through a hard time, eagle not only signals a new beginning, but provides that person with the stamina and resilience to endure the difficulties. If eagle has appeared, it bestows freedom and courage to look ahead.

The eagle is symbolic of the importance of honesty and truthful principles.

Summon the eagle when you are about to embark on a challenge, a massive life change or a creative endeavor…

From “A Brief Exploration Of The Spiritually Of The Eagle” we learn:

That the eagle is present across a range of beliefs or philosophies and represents spiritual protection, carries prayers, brings strength, courage, wisdom, healing, creation…

The dictionary of scripture and myth, describes the eagle as: A symbol of the holy spirit, which flies, as it were, through the mind (air) from the higher nature (heaven) to the lower nature (earth) and soars aloft to the self (sun).

Native American cultures sees the Eagle as a state of grace that is reached through inner work, understanding and passing the initiation tests that result from reclaiming our personal power.

Eagle Medicine is the Power of the Great Spirit.

It is the spirit of tenacity.

It is the gift of clear vision with which one can truly see the things one sees.

It is the patience to wait for the appropriate moment.

It is to live in balance with heaven and earth.

Eagle reminds us of our connection with the Great Spirit….

What follows are the words I delivered on 11 September 2016 [a few hours after my close encounter with a Colorado eagle] to a few concerned American Christians, Jews and others who had showed up to hear USS LIBERTY veteran Philip Tourney speak about his experiences and the USA Government cover-up of Israel’s June 8, 1967 attack on the USS LIBERTY.

Hi, I am Eileen Fleming, from New York but I live in Florida.

Before that day we call 911, I was a comfortably numb Christian and privileged American.

I am also the granddaughter of a German Jew who died before I could learn how many of my relatives were gassed or fried by the Third Reich.

THAT DAY we call 911 irrevocably altered my life and shortly thereafter I realized my childhood dream of being a writer and reporter simply because The Media was NOT asking my questions!
I began to research America’s Middle East policies and being a follower of the NONVIOLENT Jesus, I was led to join the Olive Trees Foundation for Peace founded in Orlando by a 1948 Palestinian Muslim refugee from the Galilee who made his way to the USA and realized the American Dream.
Dr Diab inspired American Christians, Jews, Muslims and others to learn about the Israeli Palestinian conflict and we raised funds for over 40,000 fruit bearing trees that were rooted on both sides of The Wall before the non-profit disbanded. In 2005, Dr Diab was my shepherd on my first of 8 trips to both sides of The Wall in the Holy Land and shortly thereafter I connected with SABEEL:

But I knew nothing about the USS LIBERTY until 13 October 2007, when I heard Phil Tourney speak in California at “The No More Wars for Israel Conference”, which had been dedicated to Israel’s Nuclear Whistle Blower, Mordechai Vanunu.

I was asked to speak at the conference because I met Vanunu while in Jerusalem in 2005, and we began a series of interviews that are freely streaming at YouTube and enshrined in hundreds of articles and four of my so far seven books.

Before I made the trip to California, a few human rights activists warned me that I should NOT attend the conference because anti-Semites, neo-Nazis and white supremacists would be in attendance!

I thanked them for their concern and imagined Jesus would welcome the opportunity to speak to anti-Semites, neo-Nazis and white supremacists and so—I gleefully traveled from Florida and arrived in California to learn I did not even have a room at the Inn where the conference was scheduled to take place.
The hotel had also cancelled the event due to complaints that there would be anti-Semites, neo-Nazis and white supremacists in attendance.

But when USS LIBERTY survivor and then current President of the USS LIBERTY Veterans Association, Phillip F. Tourney spoke about that day in infamy on 8 June 1967, I KNEW why I had made the trip!

Tourney spoke in depth about the 34 Americans who were brutally slaughtered, 172 wounded [including himself] all because Israel attacked America’s virtually unarmed premier spy ship the USS LIBERTY while she navigated in international waters during the Six Day War.

When Phil said “It was God that kept the LIBERTY afloat” I knew I would do more than just listen to him.

In 2012, I ran for US HOUSE on a platform that included establishing every June 8 to be known as USS LIBERTY REMEMBRANCE DAY.

I am here today, to ask YOUR help in establishing USS LIBERTY REMEMBRANCE DAY in the hearts and minds of your families and friends by sharing the USS LIBERTY PETITION, which will be delivered to Congress following the 8 June 2017, USS LIBERTY reunion in Norfolk, Virginia…

On 8 June 2017, THIS AMERICAN reporter and USS LIBERTY supporter will attend the graveside memorial service for the 34 USS LIBERTY crewmen who after being killed by Israel while navigating in international water were dishonored by the LBJ Administration which covered up the attack and set the precedent of 50 years of disrespecting USA Veterans.

YOU can help establish every June 8 to be known as USS LIBERTY REMEMBRANCE DAY and learn more:

Eileen Fleming is the Health Reporter and Senior NON-Arab Correspondent for USA’s TADN,

A prolific author and Producer of UNCENSORED “30 Minutes with Vanunu”