For Hamas leader Khaled Meshaal, this year was an emotional roller coaster that had the potential to destroy his fledgling and increasingly powerful organization or make it even more powerful and relevant than ever before.

Speaking to chairman of Hamas political Bureau in the Qatari capital, Doha last week on wide range of issues, Meshaal appeared to be relaxed and eager to talk about his organization accomplishments in confronting the latest Israeli war on Gaza last summer. On his mind however, was the aftermath of the war, especially the relations with the Palestinian authority, and rebuilding Gaza and the Israeli encroachments and attacks on Arab East Jerusalem and Al Aqsa Mosque.

“Jerusalem is in danger, yet Palestinians and Arabs are not doing enough to save from Israel” he said to me in a serious tone. Meshaal was referring to the latest Israeli-Palestinian clashes over Israeli prevention of Palestinian worshipers to reach al Aqsa and Israeli settlers attempt to establish a foothold in the Islamic holy site compound.

He also warned of a religious war between Muslims and Jews should Israel continue with its policies of facilitating setters attacks on Jerusalem and Muslim holy sites.

On the issue of Palestinian reconciliation, Meshaal told me that he and his organization have signed all the necessary agreements with the Palestinian authority headed by Mahmoud Abbas. Although Meshaal was careful not to blame Abbas outright for lack of progress between Hamas and the PA, he said however, “The PA should immediately return to Gaza and assume its responsibilities toward Gaza and its people.”

Ever since Hamas and Israel signed a ceasefire agreement last fall, which included provisions to start rebuilding Gaza’s destroyed infrastructure, Gaza has yet to see any serious effort to rebuild what the war had destroyed.

In addition, many civilian houses and business were destroyed and its owners were left without compensation or means to rebuild their shattered lives. One argument that speculates on the reasons for the lack of progress between Hamas and the PA is due to a coordinated effort between Abbas, Egypt and Israel to squeeze the people of Gaza economically and block any serious efforts to rebuild war’s destruction in order to have Hamas blamed for it.  For its part Hamas is eager to widen the scope of its regional allies through rapprochement with Iran so it can loosen the Arab-Israeli blockade against it. Also today, Hamas scored a major victory albeit incomplete when the European court took Hamas off the terror blacklist as reported by British newspaper the Guardian. 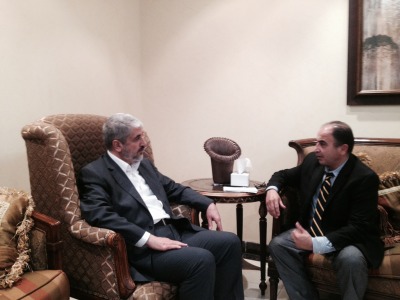 Meanwhile, the relations between Hamas and the PA have deteriorated badly last month after a serious or small explosions that rocked several houses and locations that belong to officials from Mahmoud  Abbas’s Fatah party.

Fatah officials including Abbas himself were quick to blame Hamas for the explosions in an attempt to capitalize on them to cast Hamas as the perpetrator and thus blame for sabotaging the reconciliation efforts.  Fatah officials claimed that the explosions were planted by Hamas operatives because Hamas has total control over Gaza.

Meshaal denied such charges and said that his organization is sincere about reconciliation with its Fatah rival. “The PA is welcomed and in fact needed to come to Gaza and conduct a thorough investigation to find out who really were behind these attacks.”

(Ali Younes is the editor of The Arab Daily News. Reach him at aliyounes@thearabdailynews.com