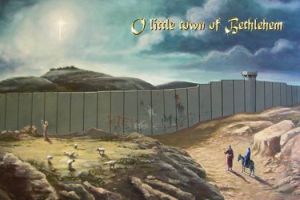 Towering walls and militarized fences now encircle Bethlehem, turning the 4,000-year-old city into a virtual prison for its Palestinian Christian and Muslim citizens. Bethlehem has only three gates to the outside world, all tightly controlled by Israeli occupation forces.

Israel has confiscated almost all the agricultural land in the area for illegal settlements, making it impossible for many Palestinian farmers to continue tending their land. Outside the town, the fields where shepherds once watched their flocks are being filled by Israeli housing blocs and roads barred to the descendants of those shepherds.

“It is unconscionable that Bethlehem should be allowed to die slowly from strangulation,” says South African Archbishop Desmond Tutu. Bethlehem’s residents increasingly are fleeing Israel’s confining walls, and soon the city, home to the oldest Christian community in the world, will have little left of its Christian history but the cold stones of empty churches.

Though most Americans don’t know it, we are directly involved in Israel’s strangulation of Bethlehem…

“We are living in a tomb, we are buried alive…When Hillary Clinton visited Jerusalem and said the wall was not against the Palestinian people, she killed us too! Christians who do not care kill us too!”- Claire Anastas

In February 2003, the Palestinian Authority informed Claire Anastas and her family of fourteen that Israel’s Wall would soon be coming to their neighborhood.

Claire’s three-story home with a first floor store had been the closest gift shop to Rachel’s Tomb in Bethlehem.

Today Claire’s home and store are entombed on three sides by Israel’s Wall.

The family had moved into their home in 1967, and would spend hours in their back yard garden which had a view of open green space.

“We would watch the pilgrims and tourists visit Rachel’s Tomb and then welcome them into our gift shop” Claire explained as we walked on her land encircled on three sides by thirty feet high slabs of concrete.

For months the family helplessly observed the preparation work all around them, and then one week before Christmas 2003, Claire’s children went to school and came home to discover that every view from every window was of the concrete monster.

On February 21, 2003, Raanan Gissin, Spokesmen for Ariel Sharon was interviewed regarding Israel’s Wall and claimed, “The main purpose here is not to annex that land, but to provide security [and to ensure] freedom of access and freedom of religion.”

Israeli Jews have freedom of access and religion, but ‘Arab Israelis’ meaning the Palestinian population are denied access to their land, resources and holy sites.

Dr. Jad Issac, the director general of the Applied Research Institute examined a satellite photograph of the area stated:

“Bethlehem is the Bethlehem ghetto now…rather than seeking to ensure freedom of religion, Israel was pushing Bethlehem’s Christian Palestinians to pack up and leave. About 360 Palestinians would be left on the Israeli side and once they get rid of the Christians, then they will label the rest as terrorists.”

Dr. Shmuel Berkovitz, an expert on Jerusalem and Jewish holy places, said The Wall effectively annexed Rachel’s Tomb to Jerusalem from Bethlehem “as a matter of technical separation, without an official declaration. Right now, you can’t see any romantic place there; you can see it only as a military position.”

Rachel’s Tomb is a small stone building with a dome, which was built during the Ottoman rule and is now completely enclosed by fortifications built in 1996 and 1997.

During my first visit to Claire’s shop and home she told me:

“When the Israeli army blocked the main street in Bethlehem we hoped it would be temporary. We could not imagine anyone could block another human being and isolate them like they have done to us.

“A week before Christmas my children went to school and when they returned they were faced with the concrete wall in front of them. They cried and cried and wanted to know how could such a thing be done to them?

“We are living in a tomb, we are buried alive.

“My children suffer and their mother and father can do nothing.

“In another ten years there will be no more Christians in Bethlehem if things do not change soon.

“Everyone is leaving, we need work, and we need to feed our children.

“Jesus was born here but we are dying. My children suffer, they are angry and shout because nobody comes to visit us anymore and the children must stay inside after school.

“We use to enjoy being out in our garden watching the people, the trees, the cars that would pass by, but now we only see concrete walls. Our lives have been stolen!

“My family use to go to Haifa on the weekends, we use to live a peaceful and comfortable life. But now our business is bankrupt and we are in prison for being Palestinians.”

“Do Americans understand what happens to children when they are buried alive?

“We need a solution fast so that our children can live like American children! We want human rights!

“When Hillary Clinton visited Jerusalem and said the wall was not against the Palestinian people, she killed us too! Christians who do not care kill us too!” 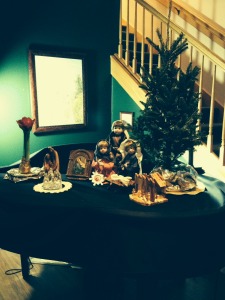 During my last trip to Claire’s shop and home, I purchased one of her hand crafted olive wood nativity sets and it remains a centerpiece on our piano among a collection of nativities.

On Christmas Eve as we sing “O Little Town of Bethlehem” I will remove the removable wall and because I still believe in miracles I will say another prayer for the end of American Tax dollars that perpetuate injustice, violence, and conflict and for US support for a just peace in the Holy Land so that Israel’s Wall will fall. 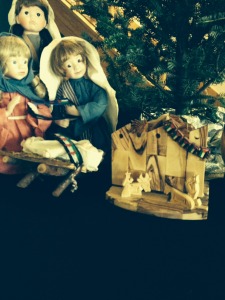 Yoga Day and Yoga as a Discipline Arab World