Arab and Jewish groups announced their opposition to a law introduced in the U.S. Senate to make it illegal for Americans to criticize Israel by boycotting Israel’s illegal, and racist Jewish settlements. The bill targets the BDS (Boycott, Divestment, Sanction) movement which targets Israel’s Apartheid policies that discriminate against Christians and Muslims.

Here are releases from some of the organizations that have voiced opposition to the bill introduced to the U.S. Senate by Marco Rubio of Florida.

Statement from the Arab American Institute

With every new Congress, the House and the Senate set their biggest priorities for their terms in the very first bills they introduce. Typically, these priorities focus on fundamental American interests. But this year’s first Senate bill, S1, takes aim at the First Amendment in an effort to shield Israel and its illegal settlements from American human rights activism that takes the form of boycotts.

U.S. Senators Marco Rubio (R-FL), James Risch (R-ID), Cory Gardner (R-CO), and Mitch McConnell (R-KY) introduced the Strengthening America’s Security in the Middle East Act of 2019, a package that includes Rubio’s Combating BDS Act, which the ACLU says would “encourage states to adopt unconstitutional laws that would unjustly punish those doing business with the state based solely on their political beliefs.”

So far, two separate federal court decisions have ruled that anti-boycott state laws were unconstitutionalas they violated the First Amendment-protected free speech of Americans. And beyond the legal technicality of the matter, there is an intuitive common sense question which has been posed in a blog posted by the ACLU: “Since when do American citizens have to pledge to act in the interest of a foreign power in order to do business with their own government?”

Americans who engage in boycotts of Israel or its illegal settlements are engaged in First Amendment-protected activity, and Rubio’s efforts to enact punitive measures for them is unconstitutional and unAmerican.

TAKE ACTION: Please call and e-mail your Senators and urge them to oppose Rubio’s attack on our First Amendment freedoms!

Statement from Jewish Voice for Peace

It’s time to fight. And it’s urgent that you act now to stop legislation that is getting voted on tomorrow.

In the midst of a government shutdown, a new bill introduced by Sen. Marco Rubio (R-FL) attacks our right to free speech by giving state and local governments explicit authority to punish supporters of Palestinian human rights who engage in Boycott, Divestments and Sanctions against Israel. 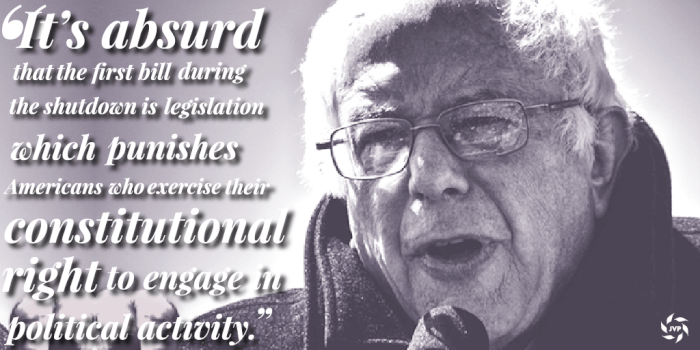 Back-up Senator Bernie Sanders and pick up the phone right now and call your senators. Click here and tell them to vote NO on S.1 TOMORROW.

Call your senators and tell them to stand up for our First Amendment rights and protect our right to boycott! Click here for a sample script and a phone number to call your Senator.

The ACLU called all these laws unconstitutional. They were already overturned by federal courts in Kansas and Arizona, and lawsuits are ongoing in Texas and Arkansas. That’s why Rubio and others who want to stop the growing movement for Palestinian rights are trying to sneak this legislation through the Senate’s first bill of the year.

This is an underhanded move to push through something we’ve powerfully fought back against. It’s time to raise your voice now. Join me and thousands of others across the country and say no to Rubio and yes to fighting for freedom, justice and equality.

Thanks for all that you do,

Right now, with millions of Americans suffering the effects of the government shutdown orchestrated by President Trump, you’d think Senate Republican leaders would put “re-open the government” at the top of their legislative priority list.

With so many challenges facing our country and our planet, Mitch McConnell and co. have made their first piece of proposed legislation — literally, S.1 — an attempt to pass into law the highly controversial “Combating BDS Act.” The bill tramples on First Amendment rights, extends US legal protections to Israeli settlements in the West Bank and harms the long-term interests of Israel.

Trying to pass this bill in the midst of the shutdown, as the top priority of a new Congress, is a shameful partisan stunt. Senate Democrats have the power to block this procedurally, if they stand together. That’s why they need to hear from you right now.

Call now and tell Sens. Durbin and Duckworth to oppose the “Combating BDS Act” and any attempt to move forward with S.1.

J Street opposes the Global BDS Movement — and we know that this kind of misguided legislation is absolutely the wrong way to counter it.

The “Combating BDS Act” enables and empowers state and local governments to impose harsh penalties on those who choose to boycott Israel or the settlements — or who refuse to sign pledges promising not to engage in boycotts.

These kinds of laws have caused schoolteachers, writers and other state employees to lose their jobs. Courts in Arizona and Kansas have already blocked the enforcement of such laws on the basis that they violate the First Amendment — with more lawsuits pending.

Infringing on freedom of speech is un-American — and does nothing to advance the true interests of Israel, the United States or the American Jewish community. Extending special US legal protections to the settlement movement only undermines the prospects for a peaceful two-state solution.

Tell your senators — Mitch McConnell’s attempt to push through this dangerous legislation has to be stopped.

The Senate’s first piece of legislation in the 116th session, dubbed S.1, does just that. Referred to as the “Middle East Security Bill” by its sponsor, Senator Marco Rubio, S.1 incorporates the Combating BDS Act of 2019 into a larger bill that would appropriate security funds for Israel and reauthorize defense cooperation between the US and Jordan.

The ACLU opposes the Combating BDS Act on the grounds that it “sends a message to Americans who engage on issues of global importance that if they dare to disagree with their government, they will be penalized and placed in a lesser class with fewer opportunities.” The ACLU has filed suits against state laws requiring contractors to certify they are not participating in boycotts of Israel or the settlements. Two federal district courts have issued injunctions, ruling that laws in Kansas and Arizona violate the constitutionally protected right to boycott.

Debra Shushan, APN’s Director of Policy and Government Relations said, “Our country is suffering the impact of a government shutdown with no end in sight. In this context, it is absurd that the first priority of the Senate would be advancing a bill that violates the First Amendment. This bill seeks to immunize against legal challenges states which force potential contractors to sign oaths promising not to boycott Israel or the settlements.

“This legislation is a political trap. By bundling security aid for Israel with controversial legislation that violates civil liberties, the bill sets up senators to be labeled as insufficiently ‘pro-Israel’ if they refuse to endorse the latter. In order to score political points, this bill will further erode the historic bipartisan consensus around a strong US-Israel relationship.”

APN rejects BDS against Israel. As a tactic to challenge Israeli policies that are inconsistent with Israeli-Palestinian peace, APN believes BDS is the wrong approach, viewing it as misguided, ineffective, and counterproductive. APN advocates boycotting settlement products and recognizes the legitimacy and potential value of other activism directly and narrowly targeted at settlements and the occupation. Read more about APN’s policy here.