To honor POTUS Trump for his decision to recognize Jerusalem as Israel’s capital and move the U.S. Embassy to Jerusalem from Tel Aviv;

On Wednesday Israel Transportation Minister Yisrael Katz announced approval of the Israel Railways steering committee’s proposal for the development of a Western Wall train station at the Cardo, an ancient street in the Jewish Quarter near the Western Wall.

The Western Wall is also known as the Kotel, the Wailing Wall or el-Mabka.

Jewish fundamentalists mourn the destruction of their ancient Temple and pray for its rebuilding at the site of the Western Wall.

The Western Wall is adjacent to the location of biblical stories such as Abraham’s willingness to sacrifice his son Isaac, where Isaac went to pray before meeting Rebecca, and where Jacob dreamed of a ladder reaching the Heavens.

Israel’s West Bank Wall is a separation barrier erected along the Green Line. Israel spins it as a ‘fence’ and “security barrier against terrorism” which in most areas is built upon legally owned Palestinian property.

The Real Wailing Wall is The Apartheid Wall that will soon cover 440 miles.

Israel’s West Bank Wall will more than double the length of the Green Line, with 15% running along it or in Israel.

The remaining 85% cuts an eleven-mile gouge into the West Bank, isolating 25,000 Palestinians from the bulk of their homeland… 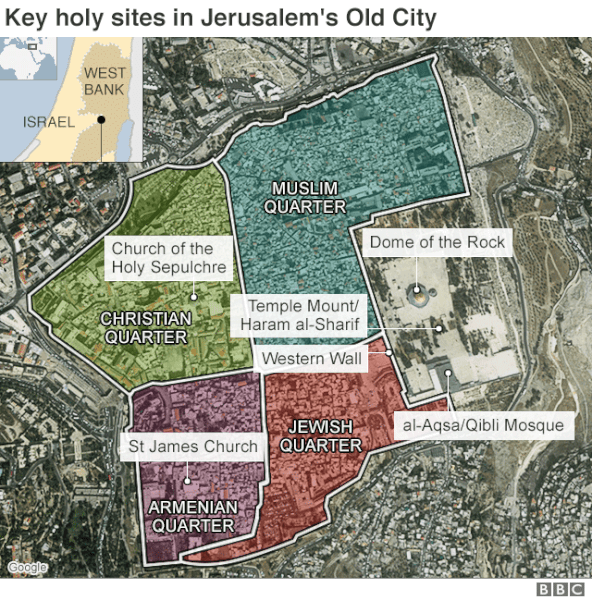 The Israeli government seized full control of the Old City in the wake of the Six Day War in 1967.

Israel’s Donald John Trump Station will be one of two stations proposed for an extension to a new high-speed line nearing completion between Tel Aviv and the western entrance to Jerusalem via Ben-Gurion International Airport and the Modi’in settlement.

ALL of Israel’s settlements are considered illegal under international law.

Israel intends on constructing two underground stations and excavating over two-miles of tunnel beneath downtown Jerusalem and the Old City.

The route will run close to — but not directly under the Church of the Holy Sepulcher, where Christians believe Jesus was crucified and buried.

The Western Wall forms part of a larger wall that surrounds the Muslim Dome of the Rock, Al-Aqṣā Mosque and Noble Sanctuary.

Previous excavations by Israel near the holy site — the spiritual epicenter of the Israeli-Palestinian conflict — have sparked violent protests.

Israel’s latest proposal is up against a wall of heavy resistance from Palestinians, neighboring Arab countries and the international community.

This American’s stand at The Wailing Wall began in 2005.

Just prior to my first journey to Israel Palestine, I phoned Mother Agapia Stephanopolous, a Russian Orthodox nun and the administrator of the Orthodox School of Bethany in Jerusalem.

I called to schedule an appointment with Mother Agapia to discuss our mutual feelings about The Real Wailing Wall after reading Robert Novak’s article “Walling off Christianity” which had reported on the nun’s letter to U.S. Congress regarding how East Jerusalem had been cut off from the rest of the West Bank.

Mother Agapia is the sister of ABC News commentator, George Stephanopolous, and she had passionately informed U.S. Congress about the fact that, “Israel is destroying the local Christian community.”

Mother Agapia predicted, “It is only a matter of time before Christians and Muslims will be unable to survive culturally and economically.”

Mother Agapia spoke bluntly about the nine yards high wall of Israeli concrete that have “shattered” the Christian communities.

She told Novak, “I witness the strangulation of East Jerusalem, and the deprivation of her non-Jewish residents’ religious rights every day. Even the United States seems to have been taken in by Israeli spin.”

On my very first afternoon in Jerusalem in June 2005, the nun met me at the Ambassador Hotel in East Jerusalem.

I told her that I hadn’t been taken in by the Israeli spin, but what could I possibly do?

I still can see her smile and shrug as if to say:

Pray then Do Something.

One something I did was to give voice to Israel’s nuclear whistle blower Mordechai Vanunu, who sent this invitation to “Hillary Clinton and all the Christians to come and see the real wailing wall: the apartheid wall.”

Vanunu sent the above invitation a few weeks after his under-reported Freedom of Speech Trial began in what is spun as “the only democracy in the middle east.”

Christian Fundamentalists and Evangelicals in the White House

Christmas Message To Mr. Trump From a Palestinian Christian and a USA Citizen of Conscience

Where is the “Arab World” when it comes to killings in Palestine? Arab World

MLK Day in the Era of Trump Arab World