On Thursday Mordechai Vanunu, Israeli nuclear whistle blower published a photo of himself alongside the statue of St. Stephen at St. Stephens Church in east Jerusalem and tweeted:

“Life continue. waiting for my freedom to travel, now after 32 years with all the restrictions. nothing changes, nothing to report, nothing to post. see you in 2018 very soon.”

On 16 July 2009, this American was walking down Nablus Road in east Jerusalem when I heard the unmistakable voice of Mordechai Vanunu call out, “Hi, remember me?”

I turned to see Vanunu who quipped, “This is the same spot where the first Christian was martyred for freedom of speech.”

We had crossed paths in front of St. Stephens Church in east Jerusalem and Vanunu was referring to the book of Acts 7:54-60: 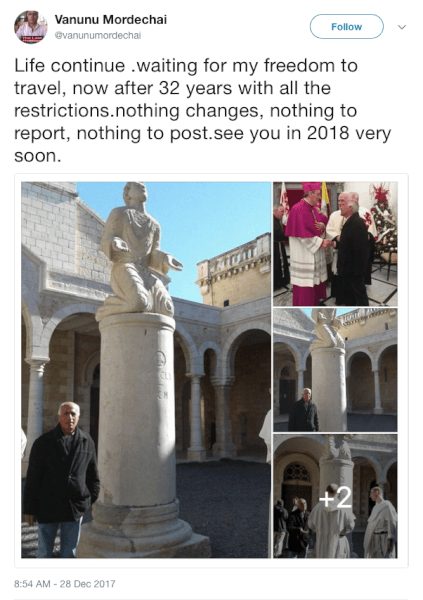 The Stoning of Stephen

When the members of the Sanhedrin heard this, they were furious and gnashed their teeth at him.

But Stephen, full of the Holy Spirit, looked up to heaven and saw the glory of God, and Jesus standing at the right hand of God.

“Look,” he said, “I see heaven open and the Son of Man standing at the right hand of God.”

At this they covered their ears and, yelling at the top of their voices, they all rushed at him, dragged him out of the city and began to stone him. Meanwhile, the witnesses laid their coats at the feet of a young man named Saul.

While they were stoning him, Stephen prayed, “Lord Jesus, receive my spirit.”

Then he fell on his knees and cried out, “Lord, do not hold this sin against them.” When he had said this, he fell asleep.

At the conclusion of The Maddening of Mordechai Vanunu Israel’s Whistleblower: A Man who knew too Much

When I last saw Vanunu in November 2013, I told him if Israel persists to deny him the right to leave the ‘only democracy in the Middle East’ I would have to update Beyond Nuclear: Mordechai Vanunu’s FREEDOM of SPEECH Trial and My Life as a Muckraker 2005-2010”;

Because I am a woman who knows too much from documenting the Vanunu Saga!

I honored my word when I published “Heroes, Muses and the Saga of Mordechai Vanunu”

I had hoped it would conclude my ten years of reporting the saga of Mordechai Vanunu;

But as Vanunu remains captive in Jerusalem with “nothing to report nothing to post”, THIS AMERICAN persists to seize her RIGHT of freedom of speech, press, and conscience and I conclude 2017 with these few notes concerning Vanunu:

FilmFreeWay is a FREE service for screenwriters to connect with writing contests.

The screenplay, “This American and Israel’s Nuclear Whistle Blower VANUNU” is under consideration in the following contests:

The Golden Script Competition – winners announced on May 8, 2018

So far I have submitted “This American and Israel’s Nuclear Whistle Blower VANUNU” screenplay to the following Producers:

“Seeking Jewish Faith-Based Scripts-We are looking for completed, feature-length, Jewish faith-based scripts. Material does not need to be family-friendly, necessarily. We are open to all genres, as long as Jewish culture and faith are central to the plot and themes of the story. Budget will not exceed $10 million. WGA and non-WGA writers may submit.”

“Seeking Faith-Based Scripts. We are looking for completed, feature-length faith-based scripts. Submissions need be for material that is family-friendly and with strong, central faith-based themes, not where the faith element is a mere subplot. “

“Seeking Inspirational Dramas About the American Dream. We are looking for completed, feature-length, inspirational dramas about the American Dream, especially those coming from the most unlikely places–stories of adversity, overcoming personal obstacles, etc. We are open to true stories and fictional material, as long at it contains these themes.”

MY introductory comment to ALL Producers regarding the screenplay “This American and Israel’s Nuclear Whistle Blower VANUNU”:

As a child the saints inspired me but my hearts desire was to become an author and reporter. My childhood dream became reality in 2005 when I was 50 years old. It happened during my first journey throughout the Holy Land after a ‘chance’ encounter in Jerusalem with Israel’s nuclear whistle blower Mordechai Vanunu. Vanunu had been freed from 18 years behind bars in 2004 under restrictions including he not speak to foreigners.

“This American and Israel’s Nuclear Whistle Blower VANUNU” is adapted from my third book, which enshrines the stories Mordechai Vanunu told me about his childhood, crisis of faith from Orthodox Judaism, atheism, a Christian baptism, etc.