Freedom of speech is the most enduring, stabilizing, sustainable value of a free society. Ultimately freedom should prevail over everything else. That is about the only thing I would die for and defend.

Pamela Geller does not defend free speech, just as ISIS does not represent Islam, both masquerade to defend but do the opposite.

On September 30, 2014, on Sean Hannity Show, I was completely taken back, when Pamela Geller and Hannity were calling for a ban on Sheikh Rachid al-Ghannouchi’s featured speech at Yale Law School, they should be instead defending it.

There is no doubt, we have to defend free speech, that is the God given right of every human. Indeed, I have defended Pamela Geller’s right to speak when United Kingdom banned her speech in London. 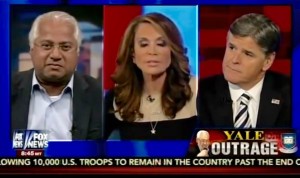 I have defended the rights of Pastor Terry Jones to burn copies of the Quran in Florida, I have even opposed the Arab League’s proposal at the United Nations to curb freedom of speech about religious personalities. And, I have defended Sheikh Rachid al-Ghannouchi’s right to free speech at Yale which Pamela Geller opposed. We have even defended her right to speak in Garland, Texas. We have to be consistent or not claim to defend free speech. She was even opposed to building Ground Zero Mosque, a building to pray! So much for freedom of speech.

Poking fun at the religious figures is nothing new. Prophet Muhammad (pbuh) has been the object of criticism from the very beginning; the people who did not like his mission have made attempts to kill him, neither was Jesus spared.

Bill O’Reilly called her act dumb and stupid, so did Donald Trump and a host of other conservative talk show hosts. Indeed Bill Maher said to applaud the Dallas Muslims for not responding and not even paying attention to Geller’s taunting.

Pamela Geller and her ilk are about Muslim Bashing; at least she is consistent there, but she is not for free speech. I have to think about other instances where she did not defend free speech. Islamophobia is nearly $50 Million industry and is growing by leaps and bounds. If you want to get funding, all you have to do is spew venom against Muslims or Gays and Lesbians, someone will fund you. The days for hatred towards African Americans, Jews and Latinos are about over.

The industry has done a good job in recruiting the services of sour-grape-former-Muslims like Ayan Hirsi Ali, Nonie Dervish, Wafa Sultan, Walid Shoebat and others. A few Right wing Muslims, Hindus and Jews are also eyeing at the pie and the pie is getting bigger.

The free speech is an enduring value and the hallmark of civilizations, and we simply cannot compromise on it, however much a few may abuse it. We believe in free speech and that is the only way societies will grow. As Muslims we seriously appreciate the gains we have had, that far outweigh the tensions given by a handful of miscreants.

A Challenge for the donors.

We don’t need to defeat or embarrass the men and women engaged in the business of pitting one American against the other, but we do have an obligation to make an effort to turn around the divisive rhetoric into a cohesive one.

The question I have for the funders of Pamela Geller or Brigitte Gabrielle is simple. Do you want to fund more division and chaos or bring cohesiveness and security to America?

The question for Muslims donors is similar; do you want to fund for defensive Bill boards across America, big Bus Signs or invest in building bridges between communities for a safe, secure and a prosperous America?

The funders have to determine their priorities, after all it is their money, and should it be for cohesion or division? 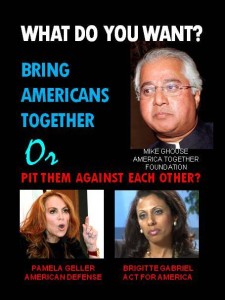 Contrasting values for the Donors

They can tear America down, we will put it together.

Is it possible to make peacemaking lucrative for Pamela Geller, Brigitte Gabrielle and others? If they can invest their energy into peacemaking, they will be good at it, whatever they do; they do it passionately and well.

We are looking for inspiring speakers to help us build a cohesive America where no American has to live in apprehension or fear of a fellow American. We want to feel, believe and build one nation under God with liberty and Justice for all.

The Muslims and Freedom of Speech

Let there be no doubt about it, Muslims are for free speech. When we stand up for free speech, we align with most Americans; this is one thread that binds us with fellow Americans more than any other thread. 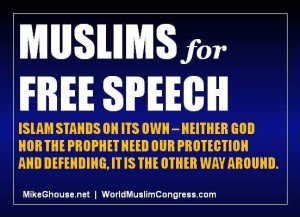 We need to handle criticism of Quran, Islam and the Prophet with grace, and respond it gracefully. At least it increases the chances of mitigating the conflict and restoring harmony. The other way around is fighting back, which guarantees further aggravation of the conflict and isolation. Let freedom of speech remain the corner stone of Islam.

God’s advice in Quran 41:34, “To overcome evil with good is good, and to resist evil by evil is evil. Repel evil with what is better; then you will see that one who was once your enemy has become your dearest friend.”

Islam is not going anywhere; prophet is not going anywhere, and by opening ourselves up to criticism, we will learn a lot more about our faith than we would ever know. We need to move away from intolerance to acceptance of a different point of view without having to agree with it. Prophet Muhammad (pbuh) lived through it and Muslims can learn from his examples.

Criticism can fade away or rain on us depending on how we respond to it. Lack of conviction in one’s faith breeds intolerance towards criticism, whereas firmness in faith can lead us to learn from criticism, explore the infinite wisdom and realize the strength of our faith (Imaan); a worthy feeling to have, instead of living in doubt and shooing criticism away.

The greatest example of dealing with such criticism was a challenge in questioning the Prophethood itself while signing the Peace Treaty of Hudaibiyah. The Prophet handled it in the most pluralistic way by respecting the otherness of others, and changing his title from ‘Prophet of God’ to ‘Son of Abdullah’. Indeed, we must respond to every criticism of Qur’an, Islam and the Prophet with such a grace.

I urge fellow Muslims to be open to all the criticism with confidence, don’t shut it, and let freedom of speech remain the corner stone of Islam. Islam stands on its own; it does not need our defense, and it is silly to protect God or the Prophet, they are not weaklings or our property to protect, they belong to the whole universe, don’t they?

Next time when someone stages hate speech, and wants to burn Quran, draw Cartoons of the prophet or do something silly, please gather up and pray as Muslims, and pray with fellow Americans of different faith as we did with Pastor Terry Jones in Mulberry, Florida, or simply ignore them as Muslims of Dallas/ Fort Worth did during Pamela Gellers’ Garland exhibit.

If we don’t fall for the bait, they will not throw the hook again.

Video – What does Cohesive America mean?

Mike Ghouse is committed to building a cohesive America and offers pluralistic solutions on issues of the day. All about him is in 63 links atwww.MikeGhouse.net

Who is the killer of three Arab Muslims? American Arabs