I will never quit. My nation expects me to be physically harder and mentally stronger than my enemies. If knocked down I will get back up, every time. I will draw on every remaining ounce of strength to protect my shipmates and to accomplish our mission. I am never out of the fight. 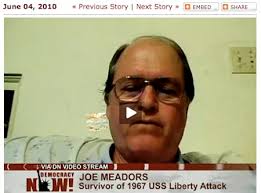 In 2010, Meadors was again attacked by Israeli forces in international waters –this time as a passenger on the Sfendoni, one of the Free Gaza flotilla boats and he will soon be on-board another!

Meadors explains he persists to put himself in harms way because he “has known about the situation in Palestine literally my entire life having been fortunate enough to live in Saudi Arabia as a child and learn about Palestine and the Zionist effort to depopulate the area from the Palestinians who were driven from their homes.”

In an 2010 interview Meadors said:

I was invited by the people at the Free Palestine Movement to visit the Gaza and see if we can try to break the blockade.

I was kind of apprehensive, given the history I’ve had with the Israelis.

I seem to have all the bad luck in the world when it comes to the Israelis.

Their overtaking of our ship was quite simple.

They just jumped onboard, a couple dozen of them, and took over the ship.

They used tasers and kicked some of the people topside when they were trying to protect the captain and the pilothouse. But their actions were quite swift.

Nothing happened to me. As a matter of fact, on hindsight, they were fairly polite. It was always ‘please’ and ‘thank you’; but those words take on a different meaning when they’re said at the point of a gun.

There is no doubt that the Israelis were committing piracy on the high seas against the Freedom Flotilla and used deadly force against unarmed humanitarians whose only crime was defending themselves against a sea and airborne invasion by heavily armed aggressors. 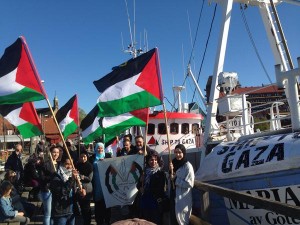 On Tuesday, Meadors informed this reporter:

Freedom Flotilla I resulted in the death of 9 participants including one American citizen during the attack by the Israeli Defense Forces.

I have accepted an invitation to participate in Freedom Flotilla III, which is scheduled to embark in the next few weeks.

Hopefully this Flotilla will be successful in breaking the siege and arrive safely in Gaza.

The only thing I am authorized to say about it is that I will be a passenger and I have to raise my own expenses.

I obviously know more but I am not at liberty to share any more info about it.

Perhaps Meadors will reach Gaza by September 10, when this Honor the USS LIBERTY Petition to Congress and President Obama will be delivered:

“Never before in the history of the United States Navy has a Naval Board of Inquiry ignored the testimony of American military eyewitnesses and taken on faith the word of their attackers.”- Captain Richard Kiepfer, MD.

Fifteen minutes into Israel’s attack on the USS LIBERTY, Dr. Kiepfer was operating on a wounded sailor when he was hit by shrapnel and, with complete disregard for his own personal safety, exposed himself to overwhelmingly accurate rocket and machine gun fire, administered first aid and treated 174 USA Troops for pain and shock and conducted a major surgical operation.

Congress has not INVESTIGATED Israel’s June 8, 1967 attack on the USS Liberty which killed 34 unarmed Americans and wounded 174 service men.

They concluded there was compelling evidence that Israel’s attack was deliberate and “Israel committed acts of murder against American servicemen and an act of war against the United States.”

The second, for every appropriate committee of the Congress of the United States to investigate the actions of the White House and Defense Department that prevented the rescue of the USS LIBERTY, including the NSA, CIA and military intelligence.

The third called for the establishment of every June 8 to be known as USS LIBERTY REMEMBRANCE DAY.

We, the undersigned Call on Congress to honor the USS LIBERTY and Support the Troops by taking the 3 steps listed above! 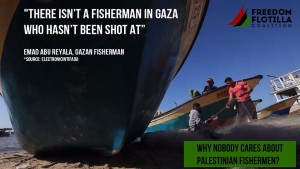 After logging in click “Send money to friends or family” for Meadors at: joe@ussliberty.com

Learn more about The Freedom Flotilla

In Israel’s elections, racism is the winning ballot Arab World

If It’s OK for 1969 Actions in Viet Nam Why Not for 1967 Actions Off The Coast of the Sinai Peninsula? Bloggers
Jacky Chamoun on the Lebanon topless pictures controversy Arab World

Comments (3) on “USS Liberty Survivor Onboard with FREEDOM Flotilla”