Teresa Shook, a virgin activist literally shook the world when she responded to the election of Mr. Trump by venting at Facebook.

In an interview with The Washington Post, the redheaded retired lawyer said:

I wasn’t that political. Something happened in me with this administration that woke up my love for people and humanity and what this country stands for.

We’re prepared to just keep letting our voices be heard and not relenting. We have to make it really uncomfortable for the Trump administration.

An engaged citizenry is the only way to preserve a democracy.

“Words must mean something”, President Obama once said [from Prague] and he raised the hopes of multitudes over the vision of a nuclear weapons free world.

THIS AMERICAN never drank Obama’s Kool-Aid but he did give me some hope that the change we all want to see could really be!

But it is what it is…

THIS AMERICAN is grateful that the change that needed to happen FIRST is happening in the USA: an engaged citizenry!

The events of 911 were the catalyst for THIS AMERICAN to become an activist.

I became a Reporter during my first of eight trips to both sides of Israel’s Wall in the Holy Land.

As a matter of conscience I voted GREEN last November.

When Mr. Trump prevailed I began to fervently pray WISDOM would prevail in D.C.

But it is what it is and one great thing post The Women’s March is it connected THIS AMERICAN in Florida to John Kaniecki in New Jersey via a Facebook post!

John is a prolific writer and for my birthday he offered to write me a poem. He also voted Green last November.

John is also his wife’s full time caregiver, a volunteer missionary for the Church of Christ at Chancellor Avenue in Newark, where for the last decade he has served the people of the inner city because:

Truly the human race is in an epic struggle. The struggle is between the oppressor and the oppressed. The evil which dominates this world uses anything they can to advance their own selfish agenda. And I want to clearly state that agenda. Their agenda is to enrich themselves materially and to give themselves glory.

On the other side is the oppressed. It is calculated that the wealthiest 62 people equals the wealth of the lower fifty percent of all mankind.

Still those rich people, pigs of the greatest proportion, are about furthering their own power and wealth; it is insanity.

I don’t think it would bother me except those bottom fifty percent are in abject poverty.

They are the ones living in Palestine where every day life is a struggle to survive.

The suffering of Palestine is not a moral dilemma. Rather it is a clear case of right and wrong or black and white.

I want the world to know that I stand with the oppressed people of Palestine to the point that I consider myself one of their numbers thus the title which is repeated twice in the poem for emphasis, “I Am Palestine.”

I Am Palestine by John Kaniecki

Your masses are stored

Have forgotten their historical scar

Rudely declaring your land is mine

The world wavers in indecision

Whether to cry for the justice foul

Or in cowardliness ignore the afflicted’ howl

In this most precarious time

Hear me as I declare

Join my voice to turn back the tide

Or know the guilt of genocide

Declare to the least and to the divine

It is my hope that poems such like as these will be read all around the world.

My poetry has a definite goal and purpose. In some ways I feel like I am advocating for those without a voice trying to articulate the just cause of those who are silenced. I served as a reminder that those who are forgotten are not in fact forgotten

Presently I have eight books out.  Four of them are poetry. “Murmurings Of A Mad Man” is a book written in strict rhyme and meter. It talks about a time where I was committed to Greystone, which is a state psychiatric hospital.

Graystone, is where Woody Guthrie died from Huntington’s Disease [a genetic disorder] after being misdiagnosed as schizophrenic

John Kaniecki concludes, “Poet To The Poor, Poems Of Hope For The Bottom One Percent” has some of my best poetry.”

It is what it is and THIS AMERICAN, John Kaniecki and MULITITIDUES more are praying, hoping, and working for THE BEST:

WHICH IS YET TO COME IF WE TRULY:

Hold these truths to be self-evident, that all PEOPLE are created equal, that they are endowed by their Creator with certain unalienable Rights, that among these are Life, Liberty and the pursuit of Happiness. —

That to secure these rights, Governments are instituted among PEOPLE, deriving their just powers from the consent of the governed, —

That whenever any Form of Government becomes destructive of these ends, it is the Right of the People to alter or to abolish it, and to institute new Government, laying its foundation on such principles and organizing its powers in such form, as to them shall seem most likely to effect their Safety and Happiness. 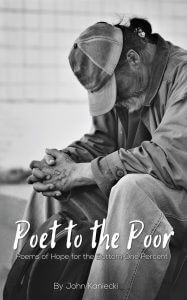 Follow John at his WRITING Page or by Email: HERE

AT Goodreads search for:  John Kaniecki

Eileen Fleming, is THIS AMERICAN
Author, Producer “30 Minutes with Vanunu” is the Senior Non-Arab Correspondent and Health  Reporter for TADN, she ran for US HOUSE in 2012 on a Platform that included ending federal regulations on cannabis, to establish every June 8 to be known as USS LIBERTY Remembrance Day, and to end USA collusion in Israel’s nuclear deceptions and military occupation of Palestine.