The headline at Haaretz announced: “‘But Sir, It’s an American Ship.’ ‘Never Mind, Hit Her!’ When Israel Attacked USS Liberty”

The Haaretz article that went viral this week, ‘But Sir, It’s an American Ship.’ ‘Never Mind, Hit Her!’ begins noting the book, “Remember the Liberty!: Almost Sunk by Treason on the High Seas” which is co-authored by three USS Liberty veterans.

The Haaretz reporter does not quote any of those eyewitnesses, but writes:

In response to a recent request by historian Adam Raz (“The Battle Over the Bomb,” 2015, Hebrew), the Israel State Archives posted hundreds of documents on its website related to the USS Liberty affair.

Raz perused the material and pulled out several fascinating documents that are likely to add more questions to those already in existence – or, if you will, provide some convincing material for conspiracy theorists…

The papers also contain several “amusing” anecdotes, such as the description of a U.S. Independence Day party that was held at the U.S. Embassy in Israel after the disaster.

“I was presented to the commander of the USS Liberty, which is here for repairs. He spoke freely about what happened and expressed his full confidence that it was a tragic mistake,” according to one of the Foreign Ministry documents.

“When asked in my presence, how long the ship’s trip to the United States would take, he replied with a smile, ‘About two weeks – unless we encounter Israeli planes again.’” 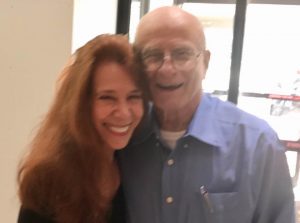 The USS Liberty was cosmetically repaired in Malta before returning to Norfolk to be scrapped.

In 2007, this American first spoke with USS Liberty’s Commander David Ed Lewis, the officer in charge of 195 men out of the total Liberty crew of 294.

We spoke through email since and finally met in June at the USS Liberty’s 50th Reunion in Norfolk VA.

During a November 2007 phone call that lasted over an hour, Commander Lewis informed me:

Rear Admiral Lawrence Geiss was in charge of the USS Saratoga and USS America. He swore me to secrecy until his death, which happened about nineteen years later.

What he told me I kept secret until I learned of his death at the first reunion and twenty year anniversary of the veterans of the USS LIBERTY.

He told me that as soon as he got the word of our distress he launched aircraft and notified D.C. and immediately heard from McNamara to recall the aircraft.

He said he assumed it was because some idiots in Washington thought that he was launching nuclear weaponry.

He reconfigured and then re-launched aircraft without nuclear capabilities. Admiral Geiss notified Washington of this and once again the immediate response that came from McNamara was the order to recall the aircraft.

Admiral Geiss challenged the order and pleaded that people are dying! LBJ was heard to say, “I don’t give a damn! I won’t embarrass an ally.”

McNamara had been talking to Geiss on an unsecured but plain language telephone, the Automatic Digital Network, Autodin.

President Eisenhower had once gotten so upset when it took three days once to receive critical information and he established the CRITICOM system. This enabled all critical intelligence to be delivered to the White House within two minutes and CRITICOM [abbreviation for “Critical Intelligence Communications”] is how Geiss and McNamara exchanged information.

Oliver Kirby, the NSA’s deputy director for operations at the time of the Liberty attack, was quoted by the Chicago Tribune confirming that the Israeli Air Force was well aware the ship was the USS LIBERTY, an intelligence gathering ship and that the “U.S. National Security Agency was able to intercept Israeli Air Force communications according to which, at some stage, the pilots identified the ship as American but were nonetheless instructed to push ahead with the attack. According to the report, some of the transcripts and intelligence information have disappeared, while the rest can be found in U.S. government archives.

Oliver Kirby, the NSA’s deputy director for operations at the time of the Liberty attack, is quoted by the Tribune as confirming the existence of the transcripts, saying he personally read them.

They said, “We’ve got him in the zero,” Kirby was quoted as saying, “whatever that meant – I guess the sights or something. And then one of them said, ‘Can you see the flag?’ They said ‘Yes, it’s U.S, it’s U.S.’ They said it several times, so there wasn’t any doubt in anybody’s mind that they knew it.”

Kirby told the newspaper that the transcripts were “something that’s bothered me all my life. I’m willing to swear on a stack of Bibles that we knew they knew.”

The report also states that then U.S. defense secretary Robert McNamara ordered jets that had been dispatched to assist the Liberty turned around.

Twenty-eight of the thirty-four that were murdered that day worked for me. I also still feel personally responsible for the loss of my Communication Officer and Communication Chief.

Just before the LIBERTY sailed they both brought me their retirement papers. They both had all their time in and I asked if one of them would do me a favor in the interest of continuity and go on one last assignment. They both replied, “For you Commander, we’ll both go!”

Not only did they die, their families also paid a price. One widow went over the edge and the state took her kids away. Some of my men were threatened with being put in a mental institution if they spoke out. None of us had any contact with the other until the first reunion of the LIBERTY twenty years after the attack. Everybody was assigned to different duty stations to keep us apart.

That morning I saw a couple of the Israeli over flights, we waved at each other. We all felt safe, as they were friends. I was back in my general quarter’s station two levels down when I heard the thud-thud-thud of the rockets overhead, but they never penetrated the bowels of the ship.

It was such a well planned accident. They took out just about every antenna we had. All of them were knocked out except for one that never worked right. It was also the first satellite communications in the U.S.A. It leaked hydrolic fluid but when it worked right, it bounced off the moon.

The torpedo explosion happened less than ten feet from where I stood and blew out the bulkhead and covered me with twenty years of navy paint. All the troops within twenty feet of me were killed instantly. The bulkhead [wall] protected me as a shield from the blast.

I shouldn’t have even survived. I was on the second level down and the compartment was sealed. Seamen Shnell broke regulations and saved my life. It’s against regulations to break watertight integrity, but he took the risk of sinking the ship to check for survivors.

I would have loved to have seen the carnage as devastating as it was, but the last thing I heard was the call to stand by for torpedo attacks on the starboard side. The next thing I knew I was sitting on the deck up against a bulkhead. My eyes were seared shut with burnt paint and not until the next morning when I was helicopter lifted out, all wrapped up from head to toe so tightly that a corpsman couldn’t tell my head from my feet and he sat on my head the entire ten minute flight. I was cyanotic when they unwrapped me, I nearly suffocated.

The Dr. stood me up against a wall to lance my eyes open and told me don’t move, just keep your eyes on the scalpel so he didn’t blind me. Then they took me straight away to Rear Admiral General Geiss who had been waiting just for me…. 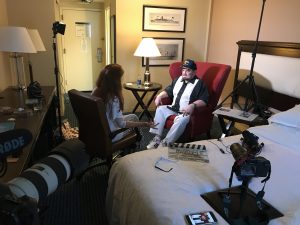 “We Americans and the USS Liberty” DVD featuring Commander Lewis has reached the final editing process!

Rashida Tlaib still has a future in politics American Arabs