What Hillary Clinton, Donald Trump, Jill Stein and Gary Johnson have in common is:

Their individual Press Offices have failed to respond to this Media Inquiry regarding the USS LIBERTY emailed on July 24, 26 and 27:

Thank you for your swift response to this YES or NO Question:

Do you support the grass roots effort to establish every June 8 to be known as USS LIBERTY REMEMBRANCE DAY?

Your response- or lack of- will be published HERE

The crew of the USS Liberty is the most decorated crew since World War II and among the most decorated for a single engagement in the entire history of the United States Navy. Virtually unarmed, the American navy ship was attacked by Israeli planes and torpedo boats on June 8, 1967 leaving 34 US Sailors and Marines dead and 174 more wounded. Yet, the attack has never received a full investigation, as required by law… [FULL Text HERE ] 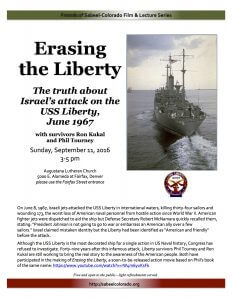 After accepting the VP spot on the Democratic ticket, Sen. Tim Kaine spoke about trust, referred to his son a Marine based in Europe and stated:

On a personal level, as he’s serving our nation abroad, I trust Hillary Clinton with our son’s life.

Trust is defined as having a firm belief in the reliability, truth, ability, or strength of someone or something.

Bryce Lockwood is a descendant of Mayflower pilgrims, a Russian linguist and was a Staff Sergeant Marine on a special mission aboard the USS LIBERTY on 8 June 1967.

The LIBERTY had been America’s premier spy ship which was navigating in international waters about 15 miles from the Gaza Strip during the Six-Day War.

Lockwood was awarded a Silver Star for his heroism during Israel’s attack on the LIBERTY; but he had bottled up his experiences until 26 September 2006, when he heard Ray McGovern speak to an overflow crowd at a church in Missouri about Iraq, AIPAC and its power over the US government and Congress.

When the former CIA analyst asked how many in the crowd had ever heard of the USS Liberty only three hands went up.

McGovern called on the man closest to him who stood ramrod straight and stated:

Sir, Sergeant Bryce Lockwood, United States Marine Corps, retired. I am a member of the USS Liberty crew, Sir; I have not been able to speak about the attack. But it has been almost 40 years, and I would like to try this evening, Sir.

Lockwood then told the crowd about Israel’s six-hour naval and air surveillance, the Israeli air attacks of bombs and napalm, and the three sixty-ton torpedo boats that lined up like a firing squad targeting the Liberty’s starboard hull.

Lockwood had been ordered to throw the cryptological equipment overboard and as he walked beyond the bulwark separating the NSA intelligence unit a tremendous explosion and sheet of flame erupted because an Israeli torpedo had struck dead center into the NSA space. Twenty-five dead and three wounded colleagues surrounded Lockwood who proceeded to lift and carry three of his mates through the hatch to keep them from floating out to sea through the hole made by the torpedo.

During this reporters 2007 phone interview with Bryce Lockwood, he stated:

My first thought was: I guess this is it God! I am coming home! But at least my kids and Lois will be taken care of. I would never deny that it was God that kept the LIBERTY afloat!

It was Phil Tourney who saved me and the unconscious man I had been trying to save. It was Phil who opened the scuttle hole to check how badly the ship was hurt and I was on the other side. I had been trying to carry an unconscious man up the ladder and every time I got to the top of the ladder I dropped him. The only light I had was coming through the torpedo hole, a torpedo that may have been made in the USA!

You also need to understand that the sea has natural rolls, and every time the ship rolled water gushed in and out of that torpedo hole, a 36 X 24 foot hole!

I dropped this guy four times trying to get up the ladder and every time I dropped him I could see him being sucked out of that torpedo hole; a torpedo that may have been made in the USA!

The hatch was sealed shut and I was pounding on it for help. Phil broke regulations for he didn’t have clearance to be there, but he saved our lives.

I passed out for a while and when I came to I was told I saved the lives of three men, but I only remember two.

Both my Arabic linguists, Sergeant Jack Raper and Corporal Eddie Rehmeyer were killed….

After the 25th Reunion of the LIBERTY Vets I was sitting in a truck stop in Cabool, Missouri. I am wearing a LIBERTY t-shirt and this lady comes up to me and asks if I was from Norfolk, where the LIBERTY had been docked.

She tells me she had been Gary Blanchard’s fiancée. Gary was sitting in a boatswain’s chair chipping and painting when the jets struck and riddled his kidneys with shrapnel.

Dr. Keifer sedated him as he told him, ‘Gary, it doesn’t look good, but if I don’t operate you won’t make it.’ Gary never woke up… 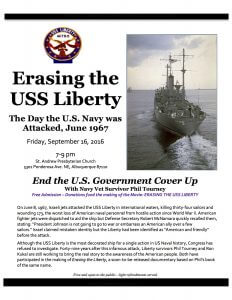 I asked Lockwood what he understood his mission was aboard the Liberty and he told me:

Commander Lewis told us that our mission was to keep track of all the Russian and United Arab Republic’s communications. He said if we picked up any Israeli communications to note it and drop it…

I am not saying there weren’t any Hebrew linguists aboard and I certainly was in a position to know about it, but I had no knowledge of any…

An English reporter, I think his name is Trevor Penick, he worked for Thames Television in London and when he interviewed Moshe Dayan he questioned him about the LIBERTY and American Congress. Dayan said something like, ‘Forget about Congress. We own Congress.’

On 8 June 1967, Lieutenant Colonel Shmuel Kislev was the chief air controller at general headquarters in Tel Aviv. Kislev confessed that he knew the U.S.S. LIBERTY was an American ship as soon as an Israeli pilot radioed in its hull numbers.

Two months before the sailor’s mass burial at Arlington Cemetery, Navy analysis uncovered that the Israeli torpedo boat gunners had targeted the spy ship with 40-mm tracer rounds made in the United States.

In 1967, the Republican representative from Iowa, H.R. Gross asked questions that still demand an answer today:

Is this Government now, directly or indirectly, subsidizing Israel in the payment of full compensation for the lives that were destroyed, the suffering of the wounded, and the damage from this wanton attack?

It can well be asked whether these Americans were the victims of bombs, machine gun bullets and torpedoes manufactured in the United States and dished out as military assistance under foreign aid.

By November 1967, lawmakers were willing to spend six million USA tax dollars to build schools in Israel and during the debate, Representative Gross introduced an amendment that:

Not one dollar of U.S. credit or aid of any kind [should] go to Israel until there is a firm settlement with regard to the attack and full reparations have been made [and Israel] provides full and complete reparations for the killing and wounding of more than 100 United States citizens in the wanton, unprovoked attack…

I wonder how you would feel if you were the father of one of the boys who was killed in that connection-or perhaps you do not have any feelings with respect to these young men who were killed, wounded and maimed, or their families.

This American also wonders IF Clinton, Trump, Stein or Johnson will reply to this Media Inquiry which only requires a YES or NO:

Do you support the grass roots effort to establish every June 8 to be known as USS LIBERTY REMEMBRANCE DAY?