London foundation recognizes the struggle of Palestinians awarding its annual $1 million Global Teacher Prize to a Palestinian teacher who works with children under the oppression of the brutal Israeli military occupation.

Ms. Al Hroub grew up in the Palestinian refugee camp, Bethlehem, where she was regularly exposed to acts of violence. She went into primary education after her children were left deeply traumatized by a shooting incident they witnessed on their way home from school. Her experiences in meetings and consultations to discuss her children’s behavior, development and academic performance in the years that followed ledMs. Al Hroub to try to help others who, having grown up in similar circumstances, require special handling at school.

With so many troubled children in the region, Palestinian classrooms can be tense environments.Ms. Al Hroub embraces the slogan ‘No to Violence’ and uses a specialist approach she developed herself, detailed in her book, ‘We Play and Learn’. She focuses on developing trusting, respectful, honest and affectionate relationships with her students and emphasizes the importance of literacy. She encourages her students to work together, pays close attention to individual needs and rewards positive behavior. Her approach has led to a decline in violent behavior in schools where this is usually a frequent occurrence; she has inspired her colleagues to review the way they teach, their classroom management strategies and the sanctions they use.

Ms. Al Hroub has shared her perspective at conferences, meetings and teacher training seminars. She hopes that, with education, her people can reclaim their homeland.

Here is a video posted of Ms. Al Hroub:

Click here to view the video at Youtube, or use the widget below to play the video now.

Here are some highlights from the celebrations! 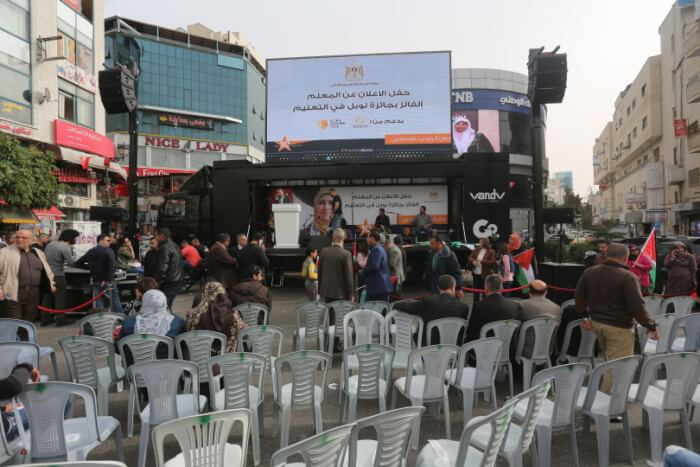 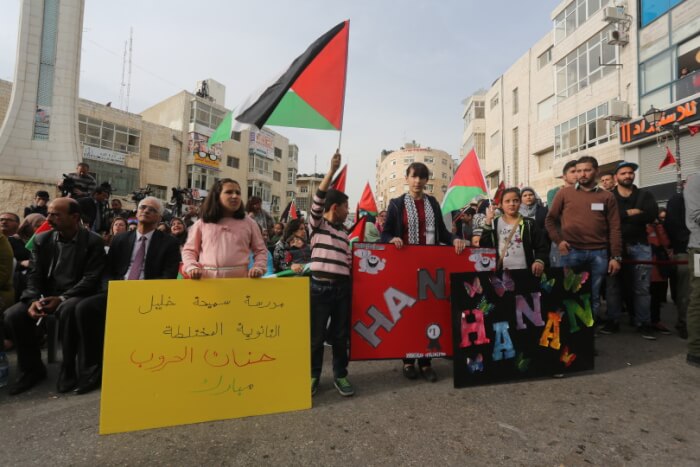 The Varkey Foundation explains the awarding of the prize each year:

The Global Teacher Prize is a US $1 million award presented annually to an exceptional teacher who has made an outstanding contribution to their profession.

The prize serves to underline the importance of educators and the fact that, throughout the world, their efforts deserve to be recognised and celebrated. It seeks to acknowledge the impacts of the very best teachers – not only on their students but on the communities around them.

Lack of education is a major factor behind many of the social, political, economic and health issues faced by the world today. We believe education has the power to reduce poverty, prejudice and conflict.

The status of teachers in cultures across the world is critically important to our global future; #teachersmatter.

You can find out more about why we believe teacher status is so important here.

The Global Teacher Prize is awarded by the Varkey Foundation with the support of many leaders from aroudn the world including the patronage of HH Sheikh Mohammed bin Rashid Al Maktoum, UAE Vice President, Prime Minister, and Emir of Dubai.

About the school where Ms. Al Hroun teaches:

The school is named after Samiha al-Qubaj Salameh Khalil (born in 1923 in Anabta, District of Tulkarm – February 26, 1999 in Ramallah), also known as Umm Khalil, was a Palestinian charity worker as well as a prominent figure in Palestinian politics.

Born in a village, she dropped out of highschool at the age of seventeen to marry Salameh Khalil. After the 1948 War, the couple fled to Gaza where they raised a family of five children, and in 1964 Samiha finally returned to school and graduated.

In 1965, Khalil came to the public eye when she founded the al-Inaash al-Usra society in her garage – it would grow to become the largest and most effective Palestinian welfare organization. In 1977 she became the first and only female member of the National Front Committee.

During the 1980s, Khalil was tied to the Democratic Front for the Liberation of Palestine and detained six times by the IDF; she saw two of her children deported from Israel and the other three (who had been out of the country at the time) forbidden from re-entering. She was eventually placed under town-arrest in al-Bireh.

In 1996 she ran for president of the Palestinian Authority, losing to Yasser Arafat, while garnering 11.5% of the vote.

A grandmother of 13, Khalil remained an active member in the political scene, serving on the Palestinian National Council up until her death in 1999.