In 1990, an act of Congress established every March 30th to be National Dr. Day; to recognize physicians, their work, and their contributions to society and the community.

One reason, I ran for US HOUSE in 2012, was to work for a congressional resolution to establish every June 8th as USS LIBERTY Remembrance Day. 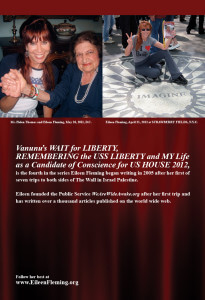 On June 8, 1967, Lieutenant Richard F. Kiepfer, was the lone medical doctor on board the spy ship, the USS LIBERTY, who “with complete disregard for his own personal safety, exposed himself to overwhelmingly accurate rocket and machine gun fire…administered first aid…treated [171 wounded] men for pain, shock…[and] conducted a major surgical operation” [Silver Star Medal Commendation].

Six weeks after boarding the LIBERTY, fifteen minutes into the attack and while operating on a sailor to control his bleeding, Dr. Kiepfer received eleven shrapnel wounds into his abdomen, a gun shot to his leg, burns and a broken knee cap. He remained on his feet and caring for the crew for the next twenty-eight hours and their spirits ever since.

In December 2007, I visited with 70 year old Dr. Kiepfer, a Catholic born and bred in Brooklyn, in his Texas home where the deer ignore the corn put out by his neighbors, for Dr. Kiepfer provides prime feed in his front yard. Obese raccoons dine on a daily feast of dog food and multiple cats eat better than mine, in his back yard. Friends, who check on the doctor daily, set the food out, for Dr. Kiepfer could no longer do what he once did.

A Master Bridge player while still in his teens, Dr. Kiepfer today continued to play the cards he has been dealt in life with aplomb and grace.

In 1973 he nearly died in a plane crash after parachuting atop of Georgia pecan trees that ended his surgical career and the use of his right hand and arm.

“As I laid there and looked at my arm and failed every test to move it, I knew then I would never operate again and began to think about what I could do in life to continue to be useful, and decided on nuclear medicine. The pilot landed a mile away from me, and was impaled on a forest of pine trees.”

After twenty years in nuclear medicine he retired after suffering a heart attack and since then has suffered the loss of two wives, but not his sense of humor, which borders on the ribald.

My weekend visit with Dr. Kiepfer in his home adorned with icons of St. Francis occurred only a week after his discharge from a rehabilitation center. He had spent the last six months recuperating from a below the knee amputation.

Retired Commander David Ed Lewis who had been the officer in charge of 195 men out of the total crew of 294 on the US LIBERTY, told me, “I know Doc has suffered more and complained less than anyone I know. Job didn’t have much on Doc. He has always dedicated his life to others and has never asked anything in return from them.”

The book of Job is a critique about the justice of God in light of suffering and finding meaning and value in that pain and not playing a blame game and I learned that Keipfer certainly qualifies.

I also had many questions for Dr. Kiepfer, and utmost was what was left out of the Court of Inquiry: such as how could the deck log which documents the hours during the attack be so neatly written and list all the dead and wounded in alphabetical order within the hours of noon to four PM but make no mention of the many Israeli over flights that occurred during the morning before the attack.

Dr. Kiepfer explained, “The deck log was not written during the attack. Captain McGonagle signed off on the Log and that makes it legal, but not authentic. McGonagle was concerned that he would be blamed for the LIBERTY being in troubled waters. I told him, ‘Over my dead fucking body!'” 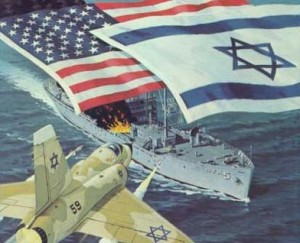 After the hellacious and unprovoked attack by Israel, they did indeed blame the victims and Dr. Kiepfer informed this reporter:

“Modern diplomacy simply does not permit one to embarrass a ‘friendly’ nation, even when that nation is caught red-handed with its torpedo in one’s ship!

“McGonagle was tormented by the idea that he was somehow responsible for the agony his ship and crew suffered. One top level theory holds that someone in the Israeli armed forces ordered the LIBERTY sunk because he suspected that it had taken down messages showing that Israel started the fighting during the Six Day War.

“Typical of Israel’s casual attitude toward the episode, an attitude which suggested from the beginning that it was really our fault for being there-in international waters-in the first place.

“Messages from Israel directly charged that a share of the blame was McGonagle’s. The Shreveport Times suggested that our government was involved in a cover-up and that the attack itself may have been conducted to prevent the ship and the United States from detecting the pending invasion of Syria” which had been scheduled for June 8th but implemented on June 9th.

“McGonagle may have misremembered or may have not reported the over a dozen Israeli over flights that morning because he may have thought he should have abandoned our mission-which was to listen in on all communications. My opinion as a civilian is that the Court of Inquiry-which was to determine if the Navy were at fault- should have inquired why he didn’t get the LIBERTY out of the area since we could see the smoke from Al Arish, in Gaza.

“I was the only Medical Corp officer to be appointed Officer of the Deck-that means I was in charge of everything on the ship when the Captain was off duty. I stood mid watch from midnight to 4 AM the night before the attack of June 8, 1967 and all was quiet. I always slept until 7:29 because breakfast ended at 7:30. Beginning at sunrise to 8 AM, the bridge reported a couple of propeller driven aircraft overhead and by noon several more. At lunch people were talking about all the Israeli over flights, but nobody was worried; they were our friends. Afterwards, as usual I went to the wardroom for coffee while the Corpsmen began the start of sick call and off duty officers pursued the national sport of sunbathing on the quarterdeck.

“Lieutenant George Golden and I were together when the attack began and we thought a steam line had ruptured when we heard the first explosion. We both headed off to our general quarters stations as the announcement sounded that we were under attack. I assumed it was perpetrated by the Arabs or Russians. Understand that nobody could identify Mirage fighter-bombers that travel at MACH One.

“Fifteen minutes into the attack, while I was operating on a sailor and trying to control his bleeding, I was hit with eleven pieces of shrapnel into my abdomen.

“A rocket struck above the ceiling of sick bay and the light over my head and the operating table protected me; both acted as a life saver for me, otherwise I would have gotten hit in my shoulders, side and back. I was knocked against a wall and waves of red and white pain throbbed through me.

“I knew I had to finish with the guy on the table-if I walked away, I wouldn’t have returned. All I could think about was keeping limbs attached to sailors. From the moment the attack began, I felt a greater presence within me that was physically holding me up. I thought it was the spirit of all the navy docs who had gone before me. I felt physically held up by my invisible assistants and with all that adrenalin coursing through me and some carefully titrated morphine that I self injected, I was able to do what I did.

“It was not until I finished that operation did I even examine myself. The fragments that penetrated me were so hot they cauterized my wounds. The pain was intense, but after applying surgical dressings to my wounds and putting on a life vest to control the bleeding I gave myself a shot of morphine and remained on my feet and working for the next twenty-eight hours.

“Just before the torpedo struck, I was summoned to the bridge and went through the mess decks from sickbay, where a number of wounded sailors were. Captain McGonagle was the only man still functioning there, the lookouts were dead, the helmsman-the guy at the steering wheel was dead and I saw the blown apart remains of our Navigator, Mr. Toth, two decks below me. All I could do was administer morphine to the still living and get them onto stretchers to evacuate them. I had two Corpsmen working with me and knew I needed more surrogates, for the wounded were shoulder to shoulder the full circumference of the passageway.

“While I was on the deck, I got hit by a fifty caliber machine gun bullet to my leg that came from the torpedo boats. I was bleeding into my shoes and not until the next day when I was able to lie down did the bleeding slow down. You know the story of the Incredible Hulk and mother’s who lift cars off of their kids? When you are angry and hurt you can do amazing things.

“If you got one hundred people into my skin that day, probably all of them would have thrown up from the hell that erupted on the LIBERTY. Men were groaning and crying for their mothers, but it was just background noise for me. I was slip sliding as I crossed the bloody deck to get to the Captain who had been hit. McGonagle was leaning back in the Captain’s chair, bleeding from many orifices; some natural and some new ones. I applied battle dressings, started an IV, gave him some morphine and sent an enlisted man to find as many officers as possible to come up to the Bridge and assist him and to watch him for shock. The Captain said, ‘If I sit up, I pass out, but as long as I stay in this position, I am OK.’

“People I had eaten lunch with were dismembered all around me, burned, dead. To this day, every time I have a phone conversation with Phil Tourney, who held the light while I was operating on Blanchard, he tells me he can still see the look in my eyes.

“Everyone in the Navy hierarchy knew we were scapegoats and the Navy would have done anything to exact retribution, but the Navy never got the chance.
“In LBJ’s mind we were just an average day’s losses in Vietnam. I doubt Israel would have attacked without the knowledge or complicity of our State Departments willingness to sacrifice a few hundred sailors to have a ‘stabilized’ Middle East and all that oil. Our State Department’s morality and ethics are just slightly below those of a Madame in a house of ill repute or a large-scale drug dealer.

1. IMAGINE: VANUNU’S WAIT for LIBERTY, Remembering the USS LIBERTY and My Life as a Candidate of Conscience for US HOUSE 2012 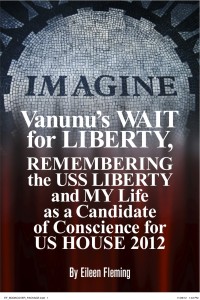