Three films from the Arab World will be in competition at tonight’s Oscars, including the first ever nomination at the Academy Awards representing the State of Palestine. They are feature film Omar, Film short Karama Has No Walls, and documentary feature The Square. A fourth film, American Hustle, touches on the anti-Arab stereotypes that were in the 1980s undercover investigation, Abscam, through fiction and fact. 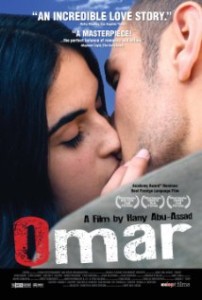 Omar is a love story about a Palestinian baker who finds himself confronting Israel’s brutal military oppression. It is the first feature film to be designated as representing Palestine. The first Palestinian-made feature film to enter Oscars competition was Paradise Now in 2005.

In Omar, a Palestinian baker who routinely climbs over the separation wall to meet up with his girl Nadja (Leem Lubany) Omar (Adam Bakri) is involved in the resistance to Israel’s oppressive military occupation.

Omar is ready to risk his life to strike at the Israeli military with his childhood friends Tarek (Eyad Hourani) and Amjad (Samer Bisharat) to end Israel’s constant military attacks and killings.

But arrested following the killing of an Israeli soldier, Omar is tricked into an admission of guilt by association and he is forced to work as an informant. So begins a dangerous game-is he playing his Israeli handler (Waleed F. Zuaiter) or will he really betray his cause? And who can he trust on either side?

Running 96 minutes, Omar was filmed in Nazareth. It is listed in the Foreign Language category.

Winning the Oscar would be a major victory for Palestinian rights not just in politics but in standing up against the anti-Arab wave that has dominated Hollywood moviemaking over the years. The vast majority of films made in Hollywood misportray Arabs and villains and terrorists without exploring the reality of the fight to free Palestine from Israeli occupation and oppression.

Omar is in competition with the following film nominees in the Category of Foreign Film:

The Square, Egypt and the United States, Documentary Feature Category 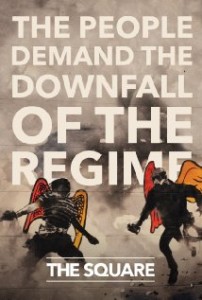 The Square is less of a dramatic film and more of a documentary that explores the Egyptian Revolution. It is produced by Jehane Noujaim and Karim Amer, named in the award nomination and it explores the Arab Spring and some of the people involved in the protests at Tahrir Square against Egypt’s pro-America dictatorship under Husny Mubarak.

Through the news, we only get a glimpse of the bloodiest battle, an election, or a million man march. At the beginning of July 2013, we witnessed the second president deposed within the space of three years. The Square is an immersive experience, transporting the viewer deeply into the intense emotional drama and personal stories behind the news. It is the inspirational story of young people claiming their rights, struggling through multiple forces, in the fight to create a society of conscience. Get more information on the film The Square online at www.thesquarefilm.com.

“This film and this nomination is in honor of the Egyptians who are still struggling as I write this–for their hopes and dreams and for the blood of the thousands that have been sacrificed for the struggle for human rights and social justice.   We made this film to tell the stories of people who are risking all that they have to fight for change–and to share their hopes and dreams with the world. Making this film took us into Tahrir Square and revealed the beauty, power and courage of the Egyptian people– a courage that has taught us and inspired us, and has personally changed our lives forever.  This film was a collaboration of talented filmmakers and was born from Tahrir Square– it is a witness that the struggle for human rights and freedoms is a universal struggle and this nomination is an international recognition of that struggle.   As Ahmed, one of the revolutionaries in the film said when he was told of the nomination– now that the world has witnessed, and our story has touched their hearts and minds,  it will never be able to be obliterated.  So thank you for this recognition, and for the power you have now given this film for spreading stories of truth and the fight for justice– You are now part of the Egyptian Revolution!  We are humbled to be sharing this honor with so many other critical films and very talented storytellers who have worked so hard to bring light to untold stories of the world,” said Jehane Noujaim, director The Square.

From the producers of The Square, about the film: Hailed as one of the finest documentaries of the year, The Square takes you directly to Tahrir Square in Cairo, Egypt, as the revolution unfolds. From the 2011 overthrow of a 30-year dictatorship to the military’s removal of the Muslim brotherhood president in the summer of 2013, we follow a group of Egyptian activists as they battle leaders and regimes and risk their lives to build a new society of conscience.

The Square transports the viewer deeply into the intense emotional drama and personal stories behind the news. It is the inspirational story of young people claiming their rights.

The Square will be competing with many other prominent films in the category of Documentary Feature. They are: 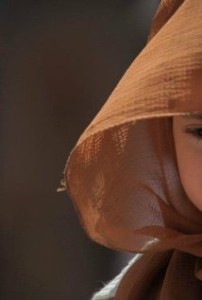 In the Documentary Short category, Karama Has No Walls by Sara Ishaq.

Karama Has No Walls details the Arab Spring protests that began in Sana’a in Yemen in February 2011 when pro-government snipers opened fire on protestors and killed 63 Yemeni civilians.

The film illustrates the nature of the Yemeni revolution in stark contrast to the gross violations of human rights that took place on Friday, March 18th 2011. Juma’at El-Karama (Friday of Dignity) marks a turning point in the Yemeni revolution as the tragic events that took place on this day -when pro-government snipers shot dead 53 protestors – shook the nation and propelled hundreds of thousands more to flock to the square in solidarity with their fellow citizens.

Through the lenses of two cameramen and the accounts of two fathers, the film retells the story of the people behind the statistics and news reports, encapsulating the tragic events of the day as they unfolded.

Karama Has No Walls will compete with the following nominated films:

Another film in tight competition for major awards at the Oscars is American Hustle which tells a story of fact and fiction recalling the 1982 FBI sting operation called “Abscam.” Abscam  featured an undercover “Arab Sheikh” who bribed elected officials and caused a protest from American Arabs against the stereotype. American Hustle is a contender for the top film prize of Best Film. American Hustle received nominations in a total of 10 categories.

The film nominees for Best Film are:

For a complete list of all of the nominated films click here. The 86th Annual Academy Awards will be broadcast live Sunday March 2, 2014 on ABC TV beginning at 7 PM EST.  For more information on where to watch the Academy Awards outside of the United States, click here.

(Ray Hanania is an award winning former Chicago City Hall reporter. He is the managing editor of the Arab Daily News www.TheArabDailyNews.com.)

Why Aden is so Important? Arab World