Kibbeh, Kubbeh or Kibbi, all names referring to the same popular Arabic dish enjoyed by many across the world. Many families have claimed the recipe as their own by adapting it to their preferences and lifestyle.  The endless variations of this meal have included (but not limited to) a torpedo-shaped fried croquette filled with seasoned ground beef/lamb and sautéed pine nuts; baked similar to a “meat lover’s” pie or boiled in a creamy broth-different but all equally delicious!

Arabic for the word, “ball,” Kibbeh is typically made of burghul, chopped onions, and ground beef or lamb. Burghul, a cracked wheat, that gives the Kibbeh a harden shell, is a staple in many Middle Eastern dishes. It’s found in many different sizes and shapes but almost always found stocked in an Arabs pantry. In this recipe Ziyad’s fine burghul, number 1 is recommended.

If making the Kibbeh in its popular ball shape, expect the recipe to yield a large amount, in which they could be enjoyed the day of or frozen to be eaten at a later date. The art of making Kibbeh, may be intimidating but is easily mastered with a few tries. Ziyad’s Kibbeh (Cracked Wheat and Halal Beef Croquettes) and Mosul Kibbeh (A Middle Eastern pie filled with seasoned beef) frozen meals make it easy to enjoy this tasty dish when short on time and craving these hearty meals. You simply defrost over night in the refrigerator and follow the easy to read directions printed on each package.

Not a big meat eater? This vegetarian Kibbeh recipe can satisfy any appetite and fill any empty stomach. The boiled then mashed potato acts as a binding agent for the bulgur wheat producing a ‘raw meat’ in which encases a savory stuffing of chopped peppers, onions and chickpeas seasoned generously with Ziyad’s Allspice. However, the filling can be changed and adapted to your choice.

To make it a meal the Kibbeh could be served with warm Arabic bread, yogurt cucumber sauce (link to recipe), or simply enjoyed on its own.  Su7tain! (Enjoy in good health)

Note:  It’s important to note that this recipe varies from village to village, and family to family. However, this is authentic and made according to the author’s recipe.

-Adjust flavor to your taste. This recipe should be used just as a reference. Use your judgment. 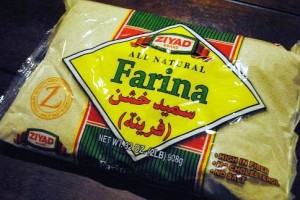 3 to 4 Medium sized Yukon Gold Potatoes, boiled in a ½ tsp of salt, drained and cooled

1 cup of Ziyad’s Burghul Wheat, #1, under cold water rinsed and then set to the side to soak up the excess water; about 20 minutes 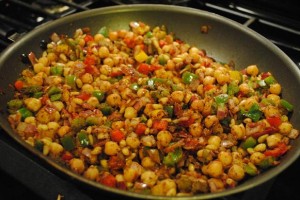 1 can of Ziyad’s Chickpeas, drained and rinsed

¼ cup of pine nuts and more for garnish (optional)

A small of bowl of water to coat hands 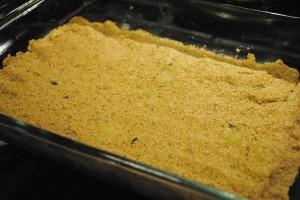 Preheat oven to 420-450F. Spray a deep casserole dish with olive oil spray or lightly greased with olive oil. Combine rinsed burghul, cooled potatoes, farina, spices, pepper and salt in a large mixing bowl. Knead all the ingredients together until a smooth, ‘dough’ forms. Coat your hands with water (to help avoid sticking) not too much or it will cause the dough to become watery. Take half of the dough and form a thin layer on the bottom of the greased pan, set aside.

Next in a large skillet pan add 2 Tbsp of olive oil and pre-heat. Begin by sautéing chickpeas for a few minutes, and then add the vegetables and spices, sautéing for another 10 minutes. Lastly add the pine nuts and sauté for just a few more minutes. Add the vegetable filling over the pre-layered Kibbeh dough, layering evenly. Coat your hands with water and take the remaining dough mixture and flatten. Add as the top layer over the vegetables. Smooth over with your fingers. With butter knife begin to score the dough and cut the ‘casserole’ into squares or diagonal shapes (as in the picture). Drizzle with the remaining olive oil. If cut into diagonal/diamond shapes; you can garnish with pine nuts for presentation by lightly placing a single pine nut on top of each piece (as pictured). Bake in the oven for a ½ hr or until golden brown. Set aside to cool before enjoy. Expect to serve seconds and thirds!

Christians Muslims: We are siblings not strangers Abdennour Toumi

Sharon and Hamas: How the Likud Bloc Mid-wifed the Birth of Hamas Arab World

A virtual visit to the birthplace of Christianity, Bethlehem Activism