I could hear her breathe five feet away. Time is passing and there is complete silence– which you don’t hear very often in radio station offices. She seemed nervous, pissed, and lost. I couldn’t help but notice the disappointment on her face. She was leaning on the studio’s door, holding her cell phone to her ear.  I was sitting next to the director in the control room.

As she took her cell phone off of her ear, she rolled her eyes and looked to the ground, trying to avoid looking at me in the eyes, or so I thought.

She finally spoke. Her voice was shaky, sour, and full of question marks.

I assumed the question was pointed towards me, as I am the producer for her show.

”Go send her an e-mail and a message on Facebook,” I told her, calmly.

She ran to her desk.

I had four seconds to think, not about what decision I will take, or what to do with the show if the guest doesn’t pick up but rather I was thinking about her reaction when her guest blew her off, even though, the guest confirmed multiple times, but when we called, there was no ringtone. This usually means, ”I don’t have time for your radio or this interview.”

Literally, she reacted in a way as if someone had died. But was it because of her show? Or was it because a guest of hers, a beautiful woman, Miss USA, whom she looks up to, disrespected her and didn’t keep her word?

The guest finally picks up and we are 7 minutes late to go on air.

Faster than wind, she ran back to the studio, slammed shut the door, and put on her headphones. She heard the intro of her show, music theme, and the director count down… Three… Two… One… Aaannnd you’re on!

Her voice filled the air… 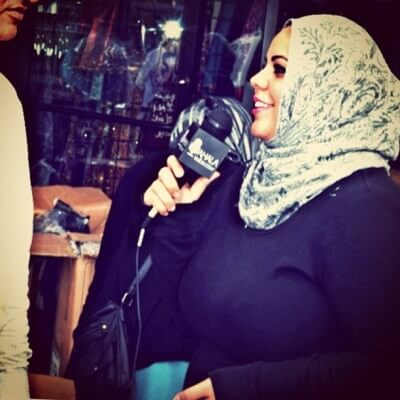 “She is beautiful … but don’t let that fool you because she has the brains and the muscles to go along with it! She is the winner of the 2010 Miss USA title and Miss Michigan. She has been trained to be a professional wrestler in WWE. She is on the top 99 most desirable women in 2011. Originally from southern Lebanon, Rima Fakih is the first Arab-American and Muslim to win Miss USA. Rima, it is my pleasure to welcome you on the show.”

Of course she stumbled on a few words and mumbled a little, but hey, that beautiful lady, Miss USA didn’t disappoint and disrespect me and the show I have been preparing the whole week is ON. –She must have been thinking this… I would.

As time was passing by, she was feeling calmer, her performance was getting steadier, and questions were pouring out towards the guest. At some point she asked the guest, “I know you were in a movie in 2006, it was called ‘The Forbidden Fruit’. Tell us about it.”

The guest was surprised, she laughed and said, ”Wow, you know about that? Very interesting, I had a lot of interviews and they have no idea about it and when I mention it, they don’t know what I am talking about. Really interesting.”

This made my night, and probably hers, and the guest’s as well.

Before she hung up the guest said ” Dream big, guys” and we all thought ”We are.”

The radio is Yahala Voice; An Arab-American radio from Chicago.

The parent company is Yahala Media; a marketing consulting group.

The show is Imprint; on Yahala Voice every Wednesday at 8:00 CST.

The host is Nesreen Ballut; a young journalist who has a very bright future in the field.

The director is Hiba Mahmoud; a self made talented director with a touch listeners can hear.

The producer is myself.

Click here to listen to the complete interview online.

You can listen to Yahala Voice on www.yahalavoice.com 24/7, you can download the mobile app Yahala Voice, and listen locally from Chicago on frequency 1450 AM.

(Reyad Ajour is the host of ‘Ya Bladi’ every Monday at 4:00 PM CST which streams online at www.yahalavoice.com and is broadcast live on WCEV AM 1450 Radio.)

(Correction: In an original version of the story, the headline mistakenly referred to Miss America rather than to Miss USA. We regret the error.)