New anti-Semitism is a concept that a new form of anti-Semitism developed emanating simultaneously from the far left, Islamism, and the far right.

New anti-Semitism manifests as opposition to Zionism, the State of Israel and Jewish people.

New anti-Semitism critics of the concept argue that it “conflates anti-Zionism with anti-Semitism, defines legitimate criticism of Israel too narrowly and demonization too broadly, trivializes the meaning of anti-Semitism, and exploits anti-Semitism in order to silence political debate.” [1]

Irwin Cotler, Professor of Law at McGill University and a leading scholar of human rights, identified the following nine aspects of what he considers to constitute the “new anti-Semitism”

In a June 2011 interview with an Israeli television station, Cotler re-iterated his view that the world is “witnessing a new and escalating […] and even lethal anti-Semitism” focused on hatred of Israel.

He cautioned that this type of anti-Semitism should not be defined in a way that precludes “free speech” and “rigorous debate” about Israel’s activities.

Cotler said that it is “too simplistic to say that anti-Zionism, per se, is anti-Semitic” and argued that labeling Israel as an apartheid state, while in his view “distasteful”, is “still within the boundaries of argument” and not inherently anti-Semitic.

He continued: “It’s [when] you say, because it’s an apartheid state, [that] it has to be dismantled – then [you’ve] crossed the line into a racist argument, or an anti-Jewish argument.” [3]

Historian Bernard Lewis argues that the new anti-Semitism represents the third, or ideological, wave of anti-Semitism, the first two waves being religious and racial anti-Semitism. [4]

According to Lewis, two distinct features mark anti-Semitism: Jews are judged according to a standard different from that applied to others, and they are accused of cosmic evil.

Lewis writes the first wave of anti-Semitism occurred with the advent of Christianity due to the Temple authorities rejection of Jesus as Messiah.

The second wave was a racial anti-Semitism, emerging in Spain when large numbers of Jews were being forcibly converted during the Spanish Inquisitions.

Lewis contends that with religious anti-Semitism, some Jews were able to distance themselves from Judaism reaching high rank within the church during the Inquisition.

Lewis associates the third wave of anti-Semitism arising only in part because of the establishment of the State of Israel.

He states until the 19th century, Muslims had regarded Jews with what Lewis calls “amused, tolerant superiority” — they were seen as physically weak, cowardly, and unmilitary — and although Jews living in Muslim countries were not treated as equals, they were shown a certain amount of respect.

The Western form of anti-Semitism — what Lewis calls “the cosmic, satanic version of Jew hatred” — arrived in the Middle East in several stages, beginning with missionaries in the 19th century and climaxing in the establishment of the Third Reich.

Yehuda Bauer, Professor of Holocaust Studies at the Hebrew University of Jerusalem, considers the concept “new anti-Semitism” to be false, since it is in fact old anti-Semitism that remains latent and recurs whenever it is triggered. In his view, the current trigger is the Israeli situation, and if a compromise were achieved there anti-Semitism would decline but not disappear. [5]

In “Jews attacking Jews”, Antony Lerman wrote that the concept of a “new anti-Semitism” has brought about “a revolutionary change in the discourse about anti-Semitism”. [6]

Lerman argues that serious scholarly research into contemporary anti-Semitism has become “virtually non-existent”, and that the subject is now most frequently studied and analyzed by “people lacking any serious expertise in the subject, whose principal aim is to excoriate Jewish critics of Israel and to promote the “anti-Zionism = anti-Semitism” equation.

Lerman concludes that this redefinition has ultimately served to stifle legitimate discussion, and that it cannot create a basis on which to fight anti-Semitism. [Ibid]

In July 2006, the U.S. Commission on Civil Rights issued a Campus Antisemitism report that declared, “Anti-Semitic bigotry is no less morally deplorable when camouflaged as anti-Israelism or anti-Zionism.” The Commission concluded that anti-Semitism is a “serious problem” on many campuses throughout the United States.

This middle aged American and granddaughter of a German Jew who died before I could learn how many of my relatives may have been gassed or fried by the Third Reich, was clueless about first, second and third waves of Anti-Semitism — UNTIL I began the research for this article!

Knowledge carries responsibility and what I learned [and continue to learn] will be included in my second screenplay:

“This American and USS Liberty Survivors of The Six Day War” a documentary based on research and my interviews with USS Liberty survivors, and begins:

This American knew nothing about the USS LIBERTY until 13 October 2007; when USS Liberty veteran, Phillip F. Tourney, lit a fire in my belly at a “No More Wars for Israel Conference”, which had been dedicated to Israel’s Nuclear Whistle Blower, Mordechai Vanunu.

I was asked to speak at the conference because I met Vanunu while in Jerusalem in 2005, and we began a series of interviews that are freely streaming at YouTube and enshrined in hundreds of articles and five of my so far eight books.

Before I made that trip to California, a few human rights activists warned me that I should NOT attend the conference because anti-Semites, neo-Nazis and white supremacists would be in attendance.

I thanked them for their concern and imagined Jesus would welcome the opportunity to speak to anti-Semites, neo-Nazis and white supremacists and so, I took the red-eye from Florida to California; but when I arrived I learned I did not have a room at the Inn where the conference was scheduled to take place. The hotel had also cancelled the event due to complaints that there would be anti-Semites, neo-Nazis and white supremacists in attendance!

But when USS LIBERTY survivor Phillip F. Tourney, [a three time President of the USS LIBERTY Veterans Association] spoke about that day in infamy in 1967, I KNEW why I had made the trip!

Tourney spoke in depth about the 34 Americans who were brutally slaughtered, 174 wounded [including himself] all because Israel attacked America’s virtually unarmed premier spy ship the USS LIBERTY while she navigated in international waters during the Six Day War.

I now depart THIS CHANNEL to first learn how to write a properly formatted Documentary screenplay and then write: “This American and USS Liberty Survivors of The Six Day War”

An excerpt from my first screenplay “This American and Israel’s Nuclear Whistle Blower Vanunu Mordechai”, which is adapted from my third book, can be read HERE 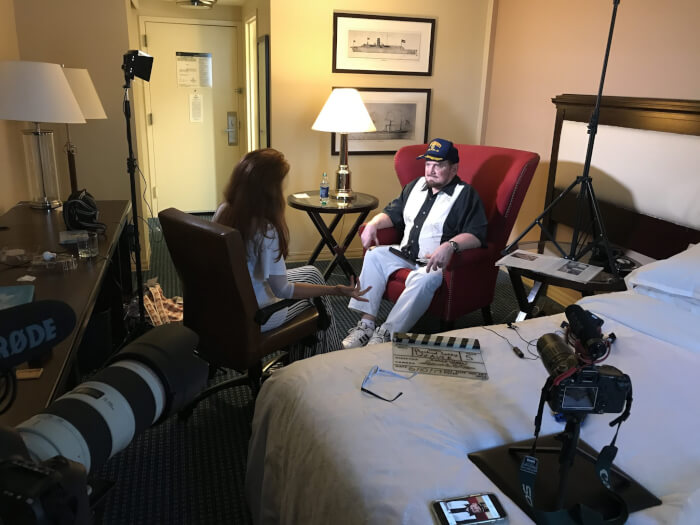