A spec script is written by a writer with hope that the script will be optioned and purchased by a producer, production company, or studio.

Norway announced on Friday that Vanunu has been offered asylum, two years after his wife applied. The current restrictions holding Vanunu in Israel will expire this November.

In 2005, this American not of Arab descent responded to my first [of 8] trips to both sides of Israel’s Wall in Palestine by going online.

After nine books and thousands of opeds and articles I have begun to learn how to write screenplays thanks to “The SCREENWRITERS Bible” and a few online classes with the author David Trottier who directed me to obtain “Movie Magic Screenwriter 6” software.

The screenplay “This American and Israel’s Nuclear Whistle Blower Vanunu Mordechai” is not available to the public but what follows are a few scenes from: 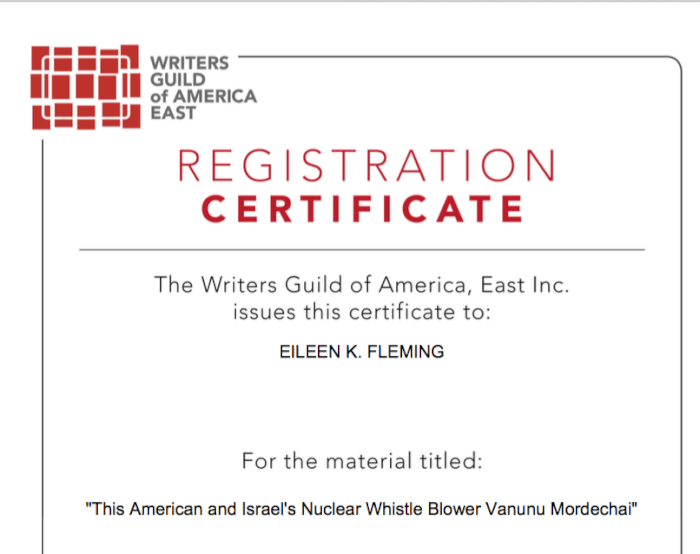 THIS AMERICAN is talking with a sweet faced woman. Her head is covered with a scarf and she is wearing a long sleeve dress that reaches her ankles.

THIS AMERICAN: Yeah so even though I have not yet met him it sure feels like I know him from reading him –

SWEET FACED WOMAN: What did you say his name is?

THIS AMERICAN: Jerry Levin and back in the 1980’s he was CNN’s Mid East Bureau Chief based in Lebanon. He was kidnapped by Hezbollah and after nearly a year miraculously escapes on a Christmas Eve –-

They both notice a fast walking late 60-ish looking wiry man sprouting bilateral hearing aids and a red baseball cap imprinted with “CPT” atop a full head of lightly greying hair approaching them. His red t-shirt is imprinted with black letters that read: “CHRISTIAN PEACEMAKERS TEAM”.

THIS AMERICAN: That has got to be Jerry –

JERRY LEVIN: Levin. Yes I am Jerry Levin and you must be that American wanting to see Hebron –-

THIS AMERICAN: Yes I am and thanks again for this opportunity.

JERRY LEVIN: See how you feel after your experience.

They bid the WOMAN goodbye and walk hurriedly up the hill to a jumbo sized vintage WW II army jeep filling with people.

JERRY LEVIN: Hop on and make your way to the very back.

LEVIN pays the driver in shekels as she stumbles to the last row and last two seats.

Arabic chatter and the noisy engine make it impossible to converse as they drive over the dusty bumpy rocky roads to Hebron.

Their jeep stops in the midst of a crowd of other old vehicles with people pouring out and walking in different directions speaking in Arabic.

She and LEVIN head towards a small open market and onto a checkpoint where a cluster of Israeli soldiers are checking ID and they join the long queue.

JERRY LEVIN: Most of the soldiers don’t like the CPTs. Whenever they won’t let us through we just go another way, and eventually we get where we want to go.

Her passport is finally inspected and she walks away hearing:

SOLDIER: Have a nice day.

LEVIN leads her through a convoluted path to a narrow stone street.

Ancient stone buildings on both sides are connected overhead by a thick netting heavy with rocks, shovels, electronic equipment, furniture, and other debris.

THIS AMERICAN: What the fuck is this about?

JERRY LEVIN: It gets cleaned out about every year or so. Come back in a few months, and this netting will be much closer to your head. The settlers just throw whatever they want onto the netting. They do what ever they want and get away with everything.

THIS AMERICAN: This stone street has been here for centuries. One side all Israeli, the other Palestinian. Is their only connection to the other this deeply sagging netting above my head? Will I be underneath it when it gives way?

LEVIN laughs. She is nauseous.

JERRY LEVIN: Sometimes the settlers curse and stone us. It keeps it interesting.

They walk through a Palestinian street bazaar where LEVIN encourages her to buy something while Arabic music plays.

She searches until she finds a group of women selling scarves and wallet-sized bags embroidered “WOMEN CAN DO ANYTHING”.

She buys a dozen of the bags and stuffs them in her backpack.

They walk to the entrance of the Abraham mosque.

A guide, without speaking English appears and instructs her to remove her shoes and put on the brown prayer shawl he holds.

She ties it under her chin but her hair spills out as she follows him.

The guide leads her and LEVIN through the mosque while a young woman, a few adolescents and three small children follow close by whispering to each other.

THIS AMERICAN turns around smiling and they smile back.

The group laughs politely and responds in unison “Marhaba” [hello].

The GUIDE speaks to them in Arabic and the woman responds at length ending with “Salaam” [peace]. The GUIDE turns away from them to explain.

GUIDE: The family has lived in the mosque since the husband died. She would not say what was cause of his death.

THIS AMERICAN fishes through her backpack, pulls out paper money and hands it to the woman who bows and chants “Salaam, salaam, salaam” as the guide leads on and the family quits following.

LEVIN leads her in silence past empty Palestinian homes with graffiti. They reach one marked “GAS THE ARABS” and stop.

THIS AMERICAN: I don’t understand it. How can a people whose families may have been gassed want anyone else to be?

JERRY LEVIN: Here come a couple of settlers, ask them.

Up the road two young Orthodox Jews walk towards them.

THIS AMERICAN: Where do you think they are from?

THIS AMERICAN: I am New York…have got to get out of this place…

THIS AMERICAN: I am. Sick at heart.

LEVIN and THIS AMERICAN walk up the hill to the Checkpoint and TERMINAL that divides Bethlehem from Jerusalem.

The thirty foot high wall is filled with colorful graffiti and artwork.

As they near the guard checking the ID for the walking traffic who will funnel through the terminal she erupts:

THIS AMERICAN: This feeling of oppression is visceral…this situation is untenable… and so is Vanunu’s. You’re pretty much the only source of information I have read about him….Except for a TV documentary I caught on the History Channel, just before Easter. It was titled “Sexpionage” all about Russian female spies and one from the Mossad. They flashed a photo of a heavily bearded unkempt Vanunu as Shimon Peres claimed Israel will not be the first to introduce nuclear weapons in the Middle East…. If it hadn’t been for your reports, I would not have known Vanunu was released from jail last April.

THIS AMERICAN: I remember reading your report last November about Vanunu having his morning coffee when thirty armed officers stormed into Saint Georges panicking the pilgrims.

JERRY LEVIN: Mordechai’s confiscated computer and letters have still not been returned. You know I haven’t spoken with Mordechai in a few months but I can give you his cell number. He appreciates being treated to dinner or a beer.

LEVIN scribbles the number on a pad he pulls from his back pocket. She takes it and sticks it down a jean pocket.

They say goodbye and she enters the Terminal…
###

By chance this American met Vanunu later that very same day, which can be read HERE

The restrictions that keep Vanunu in Israel will expire again this November.

This American will next learn the proper formatting for the documentary:

Norman Podhoretz and the face of modernday hate American Arabs