The BLACK LIST is WHERE FILMMAKERS & WRITERS MEET online.

The scripts are available to industry professionals such as agency assistants, studio presidents, and A-list actors and directors.

On Thursday this writer submitted her first screenplay based on one of my nine books to The Black List:

TRUE STORY of middle aged American who realizes her childhood dream after a serendipitous meeting with Mordechai VANUNU, Israel’s nuclear whistle-blower who had been freed from 18 yrs. behind bars for treason and espionage the year prior under draconian restrictions including he not speak to foreigners.

TRUE STORY based on extensive research and this writers 2005 interview’s with Mordechai Vanunu, Israel’s nuclear whistle-blower who had been living in east Jerusalem since his release from 18 years behind bars for providing London’s SUNDAY TIMES two rolls of film from Top Secret locations within Israel’s Dimona nuclear facility, which Vanunu shot during a few harrowing hours while working the night shift as a mid-level nuclear technician.

After leaving Israel, Vanunu and the undeveloped film arrive in Australia where Vanunu, an Orthodox Jew who gave up the faith during adolescence converts to Christianity.

After Vanunu shares his story of Israel’s nuclear program with the Anglican congregation, he connects with Peter Hounam, investigative reporter from London’s SUNDAY TIMES.

After nuclear physicists interview Vanunu in London for three days, Mossad kidnaps him on September 30, 1986. On October 5, London’s SUNDAY TIMES runs a front-page story with a three page spread including many of the photos Vanunu shot while in Top Secret locations within Israel’s nuclear facility.

9/11 was the catalyst for THIS AMERICAN to begin to research American foreign policies and then journey to Jerusalem eight times beginning in 2005.

A serendipitous meeting with Vanunu after her gut wrenching day in Hebron begins and wraps up this screenplay based on the stories Vanunu shared about his Orthodox Jewish childhood, adolescence, army service, university activism, obtaining photos from Top Secret locations, leaving Israel, through to being kidnapped by Mossad and transported back to Israel for a closed door trial, and 18 years mostly in solitary confinement. 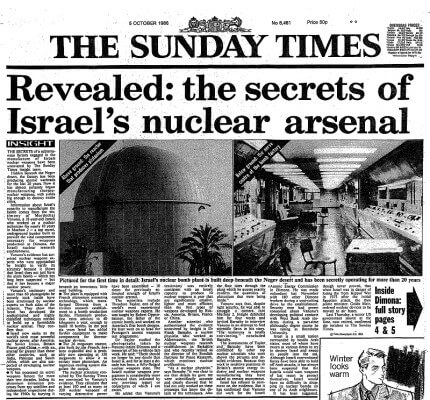 On 29 September 2017, Norway announced Vanunu’s asylum application has been accepted after a two-year wait.

The restrictions that have held Vanunu in Israel have been renewed every six months since his release from prison on 21 April 2004.

Children with PTSD in Gaza: AIPAC and MLK in USA Arab World