Arabs of Chicagoland to celebrate Arab Heritage Month in November

Although Chicago Mayor Rahm Emanuel gutted the involvement of American Arabs in Chicago government, the world is bigger than his pettiness and anti-Arab racism.

Emanuel eliminated the Advisory Commission on Arab Affairs after his election in 2011. He used the consolidation of the Chicago Human Relations Commission as the excuse to whack American Arabs. It’s one reason why many Americans, especially Arabs, are supporting the election of Robert Fioretti to replace Emanuel in the February 24, 2015 Chicago Mayoral election. Click here to Read story and listen to podcast. 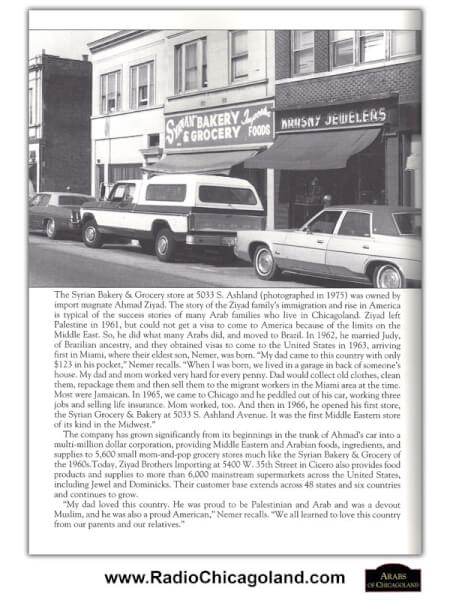 Arab Heritage is celebrated in Chicago, the Six County region of Chicagoland and in the State of Illinois. Over the years, American Arabs have been the target of racism and discrimination, not just in politics but in the Journalism Industry, which has ignored Arab Heritage, and in many communities in Illinois, such as in Palos Heights in 2000 and in Orland Park in 2004.

Although many American Arabs served with distinction and honor in the U.S. Armed Forces and are veterans including this author, we are treated with disrespect, bullying, intimidation and even persecution. After serving two years in the U.S. Air Force Active Duty during the Vietnam War, in 1975 after my Honorable Discharge, the FBI launched an investigation into my “activities” which included studying at the University of Illinois at Circle Campus. It was when I launched my journalism career that the FBI int he 1970s ordered that my case be closed to prevent me from writing about it at the time. (I currently have the 45 page FBI Report that was produced which begins that they suspected I was involved in terrorism (almost laughable) but concluded that I was merely concerned with “the well being and improvement of the Arab community in Chicago.”

Thanks for the words of support. (Fortunately the FBI today is not the same Red Squad sinister haters of the 1970s.

I wasn’t the only one. Yet, despite that service to our country, American Arabs are treated with disdain and disrespect, including by Mayor Rahm Emanuel who also failed to provide funding for the continuation of the annual Arabesque Festival on Daley Plaza. The Arabesque Festival had been organized for three years and in 2011 was cancelled.

To help put the spotlight on American Arab heritage, I have set up a website which I hope you will visit and share with others. It provides an overview of American Arab settlement in Chicago and in Chicagoland. It offers photographs and more. In the coming weeks, and through November Arab Heritage Month, I will expand and update the information and photos to make it more complete.

Some of the information is included in my 2005 book “Arabs of Chicagoland” which was published by Arcadia Publishing.

Here is the link: http://themediaoasis.com/profiles/profiles.htm

I will do my best to help publicize many of the Arab Heritage events that will be taking place in Chicagoland as well as organize and host several tours of our community during the month of November, Arab Heritage Month.

(Ray Hanania is an award winning former Chicago City Hall reporter and political columnist. He can be reached at rghanania@gmail.com.)