Tariq Ramada might be seen as a voice for the voiceless among the Muslim and Arab youth in the banlieues, but it doesn’t make him their hero.

The “affair” has become the lead storyline airing on TF1 and its sister LCI, daily news programs, calling the case the “Ramadan Gate.”

In Professor Ramadan’s case, however, the accusations have an added twist in the media. They have provided daily news material and sound bites for TV political programs, radio talk shows, papers and magazines. Le Figaro Magazine ran a four-page story about Professor Ramadan’s life, activities and intellectual connections in France and Europe. Charlie Hébdo characterized the Muslim scholar in a picturesque and tasteless graphic on the satiric paper’s front page depicting him as the sixth pillar of Islam!

While further allegations of sexual misconduct against teenage girls in the ’80’s and ’90’s have emerged in the Swiss media, this time Professor Ramadan has vehemently rejected the accusations; unlike the French woman’s accusations, he has denied the allegations and intends to file a complaint for slander.

An established scholar of Contemporary Islamic Studies at the prominent St. Antony’s College, Oxford University, (until he was placed on leave by the College Board), Prof. Ramadan is also Director for the Center for Islamic Legislation and Ethics at Doha. Further, he is the grandson of the Muslim Brotherhood founder, Sheïkh Hassen al-Benna, whose father, Dr. Saïd Ramadan, fled Egypt fearing Nasser’s regime and settled in Switzerland.

Recently Professor Ramadan has been publicly accused of raping a French-North African woman, Ms. Henda Ayari. Ms. Ayari, now 40, in her interview with BFM-TV-RMC Bourdin Show explicitly confirmed to her interviewer, Ms. Apolline Malherbe, the nature of the sexual aggression and rape in an illustrative style.

“Professor Ramadan welcomed her gently with a Middle Eastern dessert tray, she politely declined the elegant gesture of the Professor, she sat nervously — suddenly Professor Ramadan started to get close to her, first he tried to kiss her, she pushed him away, and cried: please don’t, stop.” At this moment, Professor Ramadan turned into a beast on his victim, she continued, “…one of the reasons for this animal behavior, was the fact she took off her niqab (full head cover)…” she told the journalist.

Ms. Ayari concluded her vivid description of what happened that night in the Parisian hotel five years ago. Hence a punchline has become a phrase du jour in the French media semantic “Soit vous êtes voilée, soit vous êtes violée.” (be covered or be raped). Apparently these are the grave words of Professor Ramadan, according to Ms. Ayari. 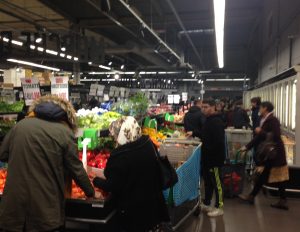 Ms. Ayari decided to abandon the Salafi approach, discard her hijab (Islamic cloth), become westernized (cifilizi) and live like any free Muslim woman in France. “Even though Muslim women in France wearing hijab and niqab are not suppressed,” Ms. Rachida, a public servant at la Courneuve City Hall, Seine-Saint-Denis Department (93), told me.

“I myself wear the khemar, as soon as I get to the City Hall’s gate, I fold my headscarf and put it in my purse because I am not allowed to work covering my head. This is the Republic’s imperative and I respect the law,” she continued.

As far as the Professor’s judiciary troubles are known within the devoted/practicing Muslim and Arab community, it is rather a political rejection of the “politically correct” imposed by the media’s unfounded stories. There are about six million Muslims in France of which a large majority feel wrapped in the Republic’s values and laws, despite the cultural differences.

“We are born and live in France, and we are worshiping our faith freely, and Professor Ramadan is just a soft voice of Islam and Muslims in the West when he speaks to the media, that’s all, he doesn’t represent me nor is he my hero,” Ms. Kaouther, a social worker manager in a Parisian suburb center, told me in an e-mail exchange.

To Faiza, a high school French teacher, Professor Ramadan is a full invention of the French media. “Frankly I don’t know him more than seeing him on TV on the rare appearances. Unlike his antidote, Mr. Mohammed Séfaoui, an Algerian journalist, who mostly chronicles Islamist questions on BFM-TV, C-News and Canal Plus…”

“Professor Ramadan makes practicing Muslims of North-African origin proud because of his intelligence and deep understanding of the French culture and history. Usually the media features either a weak or an opaque Muslim speaker, worse to ridicule [us] like the media’s and the Parisians’ Jewish lobby, Imam, you know what I mean! In the end, Professor Ramadan doesn’t represent me nor any Muslim leader,” Redha, a personal friend, said.

Hassen, an engineer who works for a private company in Montreuil, states, “Professor Ramadan is a Muslim thinker who has become a solid asset for literate Muslims in the West; he challenges the establishment in the West — hence the media does not like to see [us] eloquent, clean shaven and clear-minded on societal topics in the age of al-Qaeeda and ISO.” he said.

“To them it is a direct threat because they still look at us as immigrants, not citizens — in my case my grandfather who immigrated from a small village in Sidi-Bel Abes, Algeria, sixty years ago, Yes, our grandparents and parents didn’t have the chance to master the language and integrate fully in the host society or pray in decent Mosques; the majority were illiterate and had to work hard like Hercules to give us what we have today, and I am grateful to them and proud of them,” he added.

“Despite their illiteracy, they were raising awareness: Be good citizens, work hard, be just to your sisters and be proud of your identity,” Hassen said.

The French media and politicians alike are enforcing the scapegoat logic argument to hide their failures in biased policies and unfairness in reporting news; they direct their cameras, micros and keyboards toward the banlieue, as if the French Muslim citizens with immigrant background and the legal Muslim resident immigrants who live in the banlieus are aliens.

These peripheral towns embedded in the large cities in France are presented like occupied territories in Palestine and war zone battlefields in Syria and Iraq. Eric Zemmour, a French right-wing polemist, called France’s banlieus “Gaza.”

During my long hours in discussion for this piece, many of the people I spoke with, including leaders of the so-called Muslim community, shared the same sentiment, i.e., no one wanted to speak out on the case.  According to one Imam, “it is a media fabrication and ‘we’ won’t get into this.” One senses that the Muslim community in France is divided and lost in the message.

However, according to Abderahim, a volunteer Imam at Le Mirail Mosque in Toulouse, “the media went off-road, these accusations are still allegations and the justice system is investigation the case, so let the investigation run  its course, thankfully this is happening in France, and not in Egypt or Saudi Arabia, where Professor Ramadan is persona-non-grata, there and in other Arab counties.”

“The presumption of innocence is a legal principal and the right of the accused in a criminal investigation until he is proven guilty,” as Warda put it, a young activist for the Social and Cultural Association in Toulouse, Joliment neighborhood, where he is helping junior high students after school.

This is a complex matter to say the least. Muslims are already divided, preferring rather to be attached to their ethnicity and their parents’ nationalities than federated under one flag. And they are skeptical about any representation. The women interviewed showed less empathy for Ms. Ayari, unlike the men who ironically showed some empathy toward the former Salafist.

Whereas the argument posed by the Muslim women raised many questions which need to be answered: Why did she choose this time to speak out? Why didn’t she file for criminal charges right away? What was an adult devout Muslim woman doing in a hotel room with a strange man alone?

Yet Ms. Ayari took advantage of the current opportune context for all these women who are speaking out about their tragic experience and denouncing their predators — as for the last question, in accordance with Islamic principals, a devout Muslim woman cannot be alone with a man without a Merhem (unmarriageable) in any circumstance, worse to spend a night in a hotel room.

An opinion shared by Salima, a middle-aged woman and legal resident immigrant from Algeria, “Professor Ramadan doesn’t represent me by all means and [she doesn’t] believe the practicing Muslim women and men in this stance look at him as their hero nor their leader, and if he is legally condemned, he must suffer the consequences.”

However, there is a certain sense of cultural empathy that is challenging the French media and politicians. He might be seen as a voice for the voiceless among the Muslim and Arab youth in the banlieues, but it doesn’t make him their hero and leader like Martin Luther King or Malcolm X or Zidane.

In sum the French media got trapped in the so-called Tariq Ramadan “Gate.” Ms. Ayari’s decision to speak out was partly prompted by the Harvey Weinstein affair in which one must wait for the deliberation before a judge, and a review of all the evidence, or quite simply, her word against his. “In every religion there is a Tartuffe,’ as professor Morin put it, speaking on the case.

Professor Ramadan is neither a prophet nor a sixth Islamic pillar. He has been posing the right questions in the dialectic Islam-West relation, but the media prefer to focus on the peripheral dark questions rather than on the central transparent ones.

Qatar should not capitulate Arab World