Dave Abdallah, here. It has been one of my greatest honors to serve you on the Dearborn Heights City Council for almost 4 years. That is why I am seeking reelection. Tomorrow, Tuesday, August 6th, is the primary election and I am counting on the support of you, your neighbors and loved ones to help us come in strong during the primary election.

My public service commitment to Dearborn Heights remains stronger than ever. During the past 4 years you have entrusted my colleagues and to make important decisions that have in return made a positive, immediate, and long lasting impact on our community. 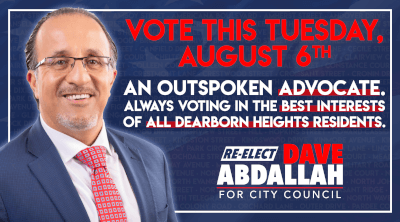 A few of my accomplishments during my term include continuously supporting increases to the public safety budget, improving wages for Dearborn Heights’ police and firefighters, as well as being instrumental in ensuring that gym facilities at both firehouses were renovated for our valued first responders. I have voted and advocated strongly for the purchase of the Warren Valley Golf Course in which we purchased at a great price for the residents of Dearborn Heights to enjoy. I participate in neighborhood association and community event meetings across the city almost daily to ensure that I am continuously aware of important issues and involved in the community.

I am committed to public service. You have entrusted me in an important role, that is why I will always make decisions based on thorough research and I will always cast votes that will serve the interests of the residents.