War embeds architecture into the mode of genesis and renders it into metamorphosis.

War is patriarch and architecture is fecund.

Urbanism and city are their progeny

Man is their author and martyr.

Earth is their house.

Past is their narrative.

Aftertime is their coda.

War embeds architecture into the mode of genesis and renders it into metamorphosis.

The New World is the leftover margin of the Old, it is expecting and waiting for something: for salvaging and scavenging, it is permanently/temporarily secluded from the factual urbanism yet included in the everyday-life. Within the larger scale of the planet, leftover spaces are lusty houses for imagination and dreams, for residing and refuging, and for hiding and lurking. The New World is under construction. From the act of residing by the homeless and immigrants to the cityscape of the New Wonderland, the Old  has become a spectacle,  which has very active presence and powerful attitude to exhibit disfigured, masked, deformed, monstrous and grotesque figures reflecting the current socio-political conditions. “Monstrous and grotesque figures are generated by operations upon the periphery of the body, undoing its coherence and thereby its separation from other bodies and from the world… The grotesque body is animated by an irrepressibly fertile energy which manifests itself not least for Bakhtin in its hilarious, ecstatic and parodic deformations of the authoritarian figure.” (Dorrian 2000: 313) Grotesque and monstrous bodies are vividly roaming Wonderland(s), haunting its people, shadowing its architecture, and questioning its reality- they are in continuous dialogue with the people and the city, as well as with one another; debating, expressing, and arguing all the juxtapositions and contradictions of the urban landscape. The presence of the prude in this context as a monstrous and gruesome figure- sometimes animalistic- mirrors the encounters between the planet and the people. Disfigured, masked and deformed figures mirror the conditions that render a Wonderland tortured.

The New World’s map is eclectic and its wind is diversified. In “The End of the Classical: The End of the Beginning, the End of the End”, Peter Eisenman (1984); one of The-Five-whites architects- argues that the Renaissance was harmonious and logical. Thus, let’s get rid of the Classical. let’s kill the demons of geography and politics. let’s start new. Once again. 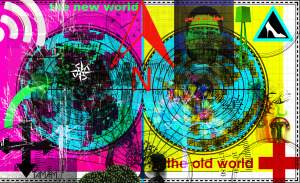 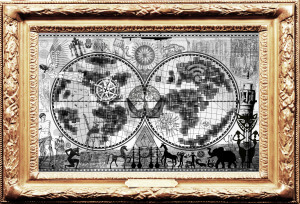