During my entire consciousness as an American of Arab heritage, I have always tried to document the experiences of my family, friends and organizations I have been involved with regarding Arab American history.

The truth is American Arabs do a poor job of documenting their presence in America, and they allow the racist, hate-driven anti-Arab mainstream news media do the documenting almost always unchallenged.

There are some who are working to document their stories but not enough is being done.

It’s not easy. American Arabs face a racist resistance from American society, mainly through institutions that have striven to intentionally exclude, marginalize and erase the presence and existence of Arabs in America. Groups like the news media, local politicians are too often afraid to speak with American Arabs like me who have demanded respect and accountability, and extremist Jewish and pro-Israel organizations who are driven by political fanaticism to silence Arab voices when it comes to Palestine and Palestinian heritage.

But I won’t be silenced.  I fought to include the Arab American voice while I was in journalism at both the Daily Southtown, which had several racist editors — some more so than others — and at the Chicago Sun-Times where racism was embedded in the system and several editors did everything they could not only to block the Arab American voice but also published articles that spread racist stereotypes about Arabs.

I always believed the news media was the primary means of educating Americans about the truth of Arab American culture, politics and society. I published Arab American newspapers in 1975 and again in 1997 to make information that the mainstream news media ignored available to Americans. Both newspapers, The Middle Eastern Voice, and the Arab American View, were published in English and faced terrible pushback from anti-Arab racists not just in government — denying the publications advertising support — but also from universities and colleges that while rejecting and blocking Arab culture advocated heavily for Jewish and Israeli culture.

And over the years I have hosted many public exhibits to expose Americans to the genuine quality and richness of Arab culture and Arab American heritage. I published the Faces of Chicago Arabs exhibit in 1999 hosted by the State of Illinois, only to have the racist Jewish United Fund of Chicago and the Jewish Federation of Chicago protest because the display included two photographs of Palestinians and the Palestine Flag. Trying to avoid conflict, the State of Illinois and Gov. George Ryan’s staff removed the large images from the display at the State of Illinois Building. They never told me or explained why and the images were destroyed.

It was a glaring example of racism from two organizations that claimed to oppose racism and anti-Semitism. When it comes to Palestinians and Arabs, some in the Jewish community leadership is often hateful and racist and they compromise principle, ethics and morality in order to achieve their own selfish goals.

Worse is that most Jews refuse to speak out against this hypocrisy.

But I have always fought against the racism speaking out against it constantly, while also speaking out against those in the Arab community who have embraced anti-Semitism, hatred of Jews and racist stereotypes of Americans. The extremists in the Arab community are a real threat. But it is wrong to single them out and say nothing about the racists and extremists in the Jewish community or in the mainstream American community, such as in the mainstream American news media.

I’ve written extensively about the racism of Chicago government but to no avail. I have tried to talk with Chicago Mayor Rahm Emanuel to educate him against anti-Arab views and policies. But so far, he has refused to meet with me or permit me to interview him.

I think politicians who refuse to speak to the concerns of all minorities, including Arabs, are promoting racism and hatred.

I am not the extremist in this relationship. But by refusing to meet with me, Mayor Emanuel is acting like an extremist who is undermining his declared values of supporting all minorities in Chicago.

Here is one exhibit that we placed in Chicago with the support of former Chicago Mayor Richard M. Daley. Although Daley and I had many difference, Daley wasn’t a coward. He was honorable in disagreement. He fought for what he believed in. But he always accommodated everyone in Chicago and the Chicagoland area, something that Mayor Emanuel has so far failed to do.

I hope and pray Mayor Emanuel changes and opens his door and his heart to the needs of Chicago’s Arab community and to use his knowledge of Judaism, the Jewish community and Israel to understand the challenges facing Palestinians and Arabs in our society today.

A lot of gratitude goes to the family of Nemer Ziyad who sponsored many of the exhibits which showcased Arab American heritage and culture.

I hope you enjoy this photograph look back at the History of Arabs in Chicagoland from my book “Arabs of Chicagoland,” published in 2005 by Arcadia Publishing. 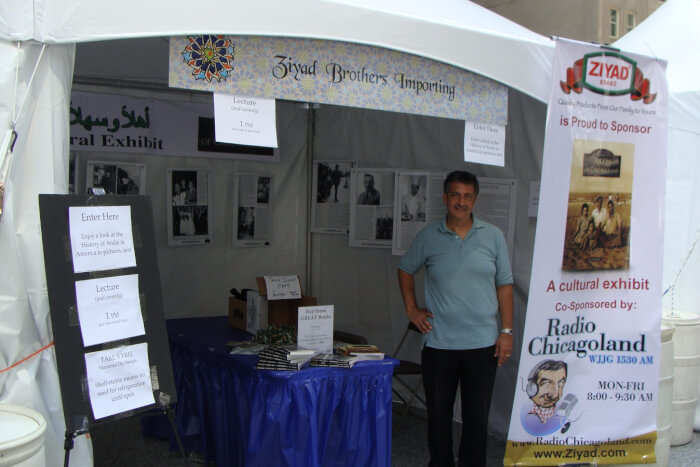 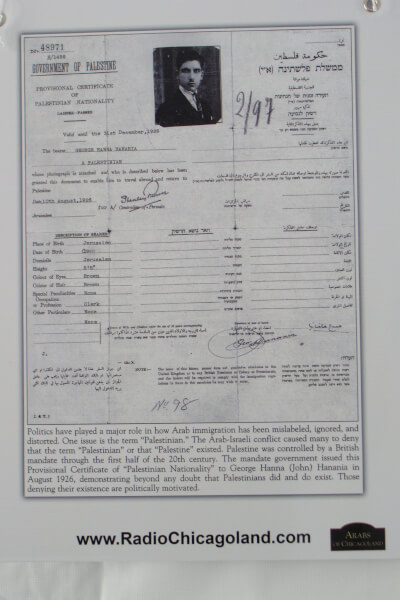