The American Legion passed Resolution 40 calling “upon the 115th United States Congress to publicly, impartially, and thoroughly investigate the attack on the USS Liberty and its aftermath and to commence its investigation before the end of 2017, the 50th anniversary year of the attack.”

Below is the response I received from the email I sent to my Congressman through the “Write Your Congressman” campaign we have created at http://bit.ly/2xPKPlE.

Thank you for contacting me about your concerns regarding the attack on the USS Liberty.

On June 8, 1967, the USS Liberty, a United States Navy technical research ship, was attacked by an Israeli Air Force jet fighter aircraft and Israeli Navy motor torpedo boats in international waters. In the aftermath of the attack, Israel apologized, saying that the USS Liberty had been mistaken for an Egyptian ship, with inquiries and issued reports confirming the Israelis’ confusion.

Currently, there is no legislation in the House regarding an official investigation of the events involving the USS Liberty, however, should legislation be introduced, rest assured that I will keep your thoughts and concerns in mind.

I greatly appreciate you sharing your concerns with me. To stay updated on what’s happening in Washington; please sign up for my e-newsletter.  I also encourage you to stay connected by following my posts on Twitter and Instagram, “liking” my page on Facebook, and subscribing to my channel on YouTube.

I’m sure you are aware that your response is misleading and obviously not intended to be sent to a USS Liberty survivor.

While it is true that there are numerous US government reports that have findings confirming the Israeli version of the attack, you fail to mention that there is no evidence in any of those reports that support such a conclusion.  Nor do you mention that according to a DoD press release shortly after the attack the US Navy Court of Inquiry was not tasked with interviewing any Israeli participant, with determining the reason for the attack or investigating the actions of the hostile force who attacked us.

You fail to mention that for over 50 years my shipmates and I have been telling Members of Congress and the Department of Defense that we saw the unmarked aircraft as they attacked our ship, we heard the jamming of our radios on both US Navy tactical and international maritime distress frequencies, we witnessed the deliberate machine gunning of life rafts we had dropped over the side in anticipation of abandoning ship, we witnessed the slow circling of our ship by Israeli torpedo boats as they fired from close range at crewmen who were either trapped topside or who ventured topside to help their wounded shipmates, we saw the Israeli helicopters filled with armed assault troops hover very close to our ship in an apparent attempt to find a place to allow those troops to rappel down to the ship, and we witnessed the torpedo boats immediate departure from the scene of the attack after cessation of hostilities instead of offering assistance as is their obligation under international law.

You also fail to mention that despite being provided with all of these facts about the attack, no Member of Congress — not you nor any of your colleagues or predecessors — have deemed an attack that contains all of those elements warrants a Congressional investigation.

Given the unique level of knowledge about the attack and continuing cover-up of that attack that is shared by every USS Liberty survivor, I am offering you the totality of our knowledge to create a boilerplate that is totally in conformity with the facts of the attack on our ship as we witnessed.

Please let me know when we can get together to finalize a completely honest USS Liberty response that you can provide to constituents who contact you about the attack on our ship.

“I will never quit. My nation expects me to be physically harder and mentally stronger than my enemies. If knocked down I will get back up, every time. I will draw on every remaining ounce of strength to protect my shipmates and to accomplish our mission. I am never out of the fight.”  –USS Liberty Survivors’ Creed

Thank you for emailing your congressional reps HERE

A few committed Americans are meeting with their Congressional Representatives asking them to address Resolution 40 which can be downloaded through this link:

THIS STORY WILL BE CONTINUED! 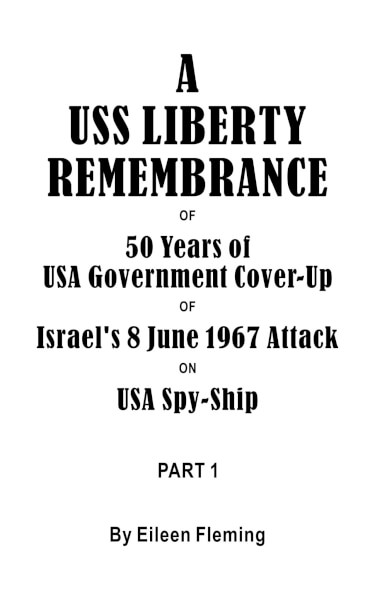