Christians and Muslims in occupied Palestine are harassed and bullied not just by the settlers but by Israeli soldiers who treat all non-Jews with disrespect. Traveling through Occupied Palestine, Dezeray Lyn shares her experiences during human rights monitoring in H-2 Hebron in the occupied West Bank which has been under siege by Israeli extremism for decades.

Whether from the confusing Free Israel graffiti stencils facing stone walls of Palestinian homes or through the prolific placement of Israeli flags sheeting mass swaths of the Israeli military controlled H-2 Hebron; clarity comes in the understanding that you are facing members of the most insecure ‘nation-state’ in the world.  Members who are occupying and terrorizing one of the most forced-defenseless.  You are in occupied Palestine.

I arrived in historic Palestine days ago, a foreign national to the occupied territory- a human rights monitor with the International Solidarity Movement in a region where occupation forces commit daily violence and daily fracturing of international law.  As a Palestinian man on the shared taxi said to me after asking me where I am from- my reply being America, I am “one of the main funders of the occupation.”

I apologize.  My tax dollars absolutely fuel the miseries happening in historic Palestine, the West Bank and Gaza- this as ‘we’ bomb for peace elsewhere.

This, a brief recounting of 24 short hours of occupation from the eyes of someone who is not forced to endure it, is the story of one day in the life of Palestinians … who are. 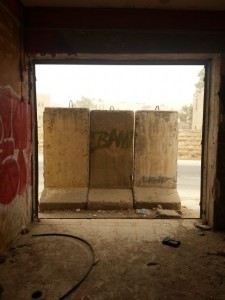 Entering H-2 proved to be difficult.  At one of the many checkpoints situated around Hebron- many which are in visible distance of the next-we were stopped by two Israeli forces and had our passports checked.  We were immediately told we were unable to leave.  After standing for nearly half an hour with no explanation, a concerned Palestinian man approached and asked if we were okay.  Unsure of the answer, we thanked him and watched two military jeeps and an Israeli police car pull up. 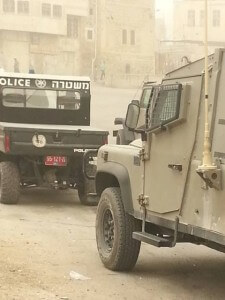 As the soldiers emerged, one with his pants undone approached me and after getting no reply from me to his greeting, he came closely to my face and grunted, “You love IDF?  You love IDF?  I love IDF.”  He then did his pants up and wandered around the jeeps making jokes, rolling a cigarette on the hood of the car and enjoying his afternoon while Palestinians made their way silently through the checkpoint.

Nearly twenty minutes later, we were dismissed with as little explanation as we were detained with.  Palestinians cross through this checkpoint, and many others, by the thousands each day- simply to carry on with their activities of working, shopping for their families, visiting loved ones, attending schools, going for walks.

The afternoon was quiet until it was time to patrol the night streets.  Armed Israeli soldiers stand scattered on stolen Palestinian ground looking menacing, illegal Israeli settlers jogging with machine guns rush past and the burst of a sound bomb goes off in the distance.  We begin our walk back to the sleeping place when we see a wall of Israeli occupation forces marching down a dark side street coming towards us.

We stop, we photograph and watch as one of them approaches us closely and shoves his camera in our faces, photographing us and obscuring our counter shots with his flash.

They march with ease, stopping Palestinian cars which are identified with white and green license plates where Israeli’s privilege comes in a shade of yellow.  There are segregated roads in Hebron.  On Shuhada Street Arabs are banned.  Though Palestinian homes line the roadway, they are disallowed by their occupiers to so much as exit their street-facing front doors and either have to climb over roofs or exit through windows or alleyways in the back to avoid being on a street which is, in fact, their own. 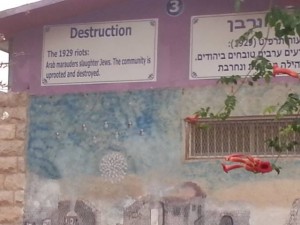 All then dismissed with the same smug arrogance the soldiers collectively seem to share.  Cars, pedestrians, children laughing street side with their friends et al- just for being in the path of the band of machine gun armed soldiers they are subject to these checks.

For nearly an hour and a half this goes on.  At one car stop near the souq, typically a bustling shopping center, the soldiers approach us again, tongues wagging, rude commentary, camera flashes in our faces … these are the subjugated Zionists honorably defending their “promised holy land.”

Two hours after its begun, it is over and we try to rest. 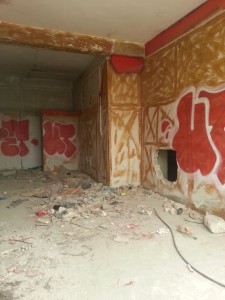 Monitoring checkpoints for young elementary aged children who have to pass through unnerving situations of heavily armed occupation soldiers and metal detectors to get to class is a twice daily activity.  Perhaps the situation in itself is unnerving, but what is mostly on the minds of those watching the checkpoints is the hope that the soldiers do not begin stun grenading and teargassing the children, something that is frequently done.  This quiet activity passes day in and day out, as do the random attacks, but they do not get air time on radio stations lulling along in cars of those in the western world as they drive their own children with ease through their city streets.  An easement taken for granted.

Gratefully the morning check goes smoothly and monitors smile as the children hold hands, running towards classrooms, eating messy handfuls of food that they grabbed on their way out the door that morning, stopping for cold drinks and to greet friends once that solemn moment of passing the soldiers is done.  And we begin the walk back to rest a few hours before the afternoon checks begin.

Soldier after soldier and street after street, I am reminded of the occupation through the military jeeps that roll by and the repugnant signs proclaiming that Arab “marauders” have stolen the land.  I am in silent thought when my companion warns me that a notoriously violent settler woman is in the streets.  She speeds up and I follow with my head down when I hear the footsteps racing up to us.  I can barely get the camera out of my pocket before she has engulfed my fellow volunteer, knocked her shoe off and is standing on her foot.  She then turns and charges me, I shove my camera in my pocket just as quickly and try not to fall as I feel her kick my foot.  Again, this is a subjugated Zionist honorably defending her “promised holy land.”

I receive quick advice that if I am being attacked by settlers, there is a Palestinian home I can take cover in-  I note that the only way I will remember this home is by the anti-Palestinian Zionist graffiti on their front door.  …and its sad.

Military jeeps and Israeli police cars sit within eye and earshot but are too busy checking peaceful Palestinian’s ID’s to intervene.  Too busy not caring – to care.

We lament on the interaction on the way back.  We talk about the injustices that quietly rack up as do the days of the occupation.  This is one day to us.  To a Palestinian, this is life. 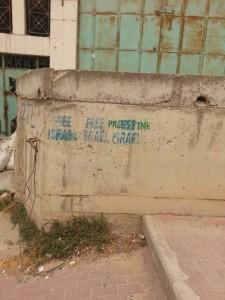