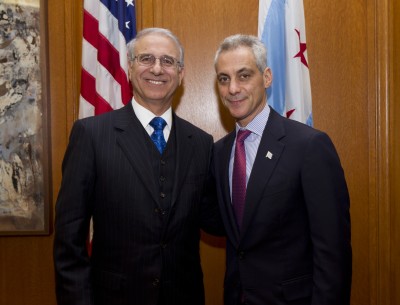 “I am pleased to welcome Ambassador Bouhlal to Chicago,” said Mayor Emanuel. “Since 1982, Chicago and Morocco have had one of the more active Sister City relationships in the world, working together to strengthen the bonds between the two cities through cultural, educational, humanitarian and economic projects,” said Mayor Emanuel.

“Today’s meeting marks yet another step in supporting this important relationship and helping the world view Chicago as a world-class city with world-class people.”

Mayor Emanuel and Ambassador Bouhlal also discussed a possible exchange between Chicago students and Casablanca students in connection with the City of Learning Digital Badging System, as well as the educational work done at the Center for Arabic Language and Culture – housed at Lindblom Math and Science Academy in the South Side’s West Englewood neighborhood.

In addition to his meeting with Mayor Emanuel, during his visit to Chicago Ambassador Bouhlal also met with the MacArthur Foundation, toured digital start-up hub 1871, and spoke at a program hosted at the Chicago Council on Global Affairs.

Today’s meeting was another example of frequent exchange between Morocco and Chicago.

Since taking office in 2011, Mayor Emanuel has committed to improving Chicago’s international relationships, meeting with dignitaries from Britain, Germany, Mexico, India, China and Poland among many other nations.

Members of the American Arab community have criticized Mayor Emanuel, however, for gutting the Arab Advisory Commission, and canceling a dozen events with American Arabs that were previously hosted by Mayor Richard M. Daley. The events include the annual Arabesque Festival at the Daley Plaza, which had only begun five years prior, the annual Arab Heritage Month celebration, which had been held in Chicago for two decades, and several entertainment venues hosted by the City of Chicago Office of Special Events featuring American Arab and Arab World poets, writers, entertainers and speakers at the Cultural Center.