Muslims and Christians have a long history of friendship and respect that can’t be broken by recent events involving terrorism and violence by a few. Christianity and Islam have close ties that should not be destroyed by stereotypes and lack of knowledge. Government leaders should remember that. 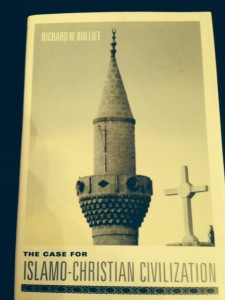 Paris – France — In the early 80’s some French Leftist reporters called the Mullahs’ regime in Teheran “Islamo-fascist.” Later some Algerian colonists and artists described that country’s terrorist groups as “Khmers verts,” comparing them to the Pol Pot regime in Cambodia of the 70’s. In the U.S. some right-wing political talk-show hosts on American cable networks and radio shows were using the term of “Islamo-fascist” to describe the same terrorist groups.

After the British intelligence service prevented a terrorist plot from taking place over the transatlantic sky, then-President George W. Bush used the term “fascist” to describe the terrorists saying, “This nation is at war with Islamic fascists who will use any means to destroy those of us who love freedom.”

This description of the so-called “enemy” of America has offended many Muslims in the U.S. and elsewhere. The phrase has also been promoted by Thomas Friedman, an arrogant “expert on the Middle and Near East.” However, President Bush had already used the problematic word “Crusader” and thus bought into the idea that the world is engaged in this new “struggle” between the civilizations of the West and East (where East seems to refer to Islam).  After the tragedy of 9/11 some like to call it the “Clash.”

The term “Islamo-fascist” is too simplistic and does nothing to help summarize the long-term struggle against any radical, fanatical, utopian ideology. The term “fascist” has nothing to do with religion.

While Paris, London and Rome were in intellect darkness, Grenada, Baghdad, and Damascus were focusing on mathematics, medicine, chemistry and the arts. El-Farabi, Ibn-Hayan and Avicenna did not have a self-destructive ideology. Those scientists that founded the Islamic civilization were never called fascists or intégristes because they were engaged in enlightening the spirits and minds of the world.

(Muslim scientists are still contributing to the enlightenment of the West. A Muslim Algerian-American, Dr. Iyes Zarhouni, was appointed Director of the National Institute of Health by President Bush in May, 2002.)

But today Baghdad is burning and el-Hamra Palace is just a sumptuous tourist trap. Ben Laden, Zarqaoui, Zaouahiri and el-Baghdadi are destructive forces tearing apart from within whatever is left of that which the great founders of Islamic civilization built.

Europe knew fascist regimes in Italy, Germany and Spain in the 20’s and 30’s, and those regimes were inspired by men of Christian backgrounds. But the Muslims never described them as “Christian fascists.” They were labeled as Fascists, Nazis or Franco-ists. Those regimes exterminated Jews, Gypsies and liberal Republicans in Spain and Italy. Conscientious Muslim soldiers fought against the fascists for their former Colonists, protected Jews from Nazi soldiers in Paris, Algiers, Rabat and Tunis — North African and sub-Saharan men who hoped one day to be able to have their “freedom,” as General de Gaulle promised.

The West’s scornful attitude continued in Iran when in 1953 the U.S. helped to remove a democratic government and replace it with a tyrannical regime. Many if not all Muslim regimes in the post-Colonial era got dictators who served the interests of the West rather than the cause of freedom and democracy.

The ray of hope and change that defined the Arab Spring offered an antidote to the disease of what the West is “fighting” today in Yemen, Iraq, Syria, Egypt, Libya Mali and North Nigeria. Because of the West’s suspicions surrounding the Arab Spring, however, the countries that comprise MENA are now a string.

The U.S. explicitly supported regimes such as Pinochet in Chile and the Contras movement in Nicaragua. France also supported dictators in Africa and the Arab World(s). The U.S. experienced a terrorist act in the mid-90’s when Timothy McVeigh took the lives of hundreds of innocent Americans in Oklahoma City. And a grand jury indicted Craig Hicks on three counts of murder when he gunned down three Muslim students in Chapel Hill, N.C. earlier this month.

Even those “Charlies” intellos and philosophers in France repeatedly argue that they are against radical Islam, as do their counterparts in the U.S., yet the amalgam is obvious. Doe one speak of the Christiano-fascism of Anders Behring Breivik, the “butcher” of Norway, or the Judeo-fascism of the extreme far-right government of Israel?  No one calls them Christian-fascist or Judeo-fascists. Nor should they.

The three monotheistic religions (Judaism, Christianity, and Islam) are all based on love, respect and harmony for all human beings. It is only the fanatics who betray them with their misinterpretations and ignorance.

Premier Valls is a leader in the land that penned the Human Rights Declaration, and President Bush was once a leader in the Free World. But Premier Valls needs to govern with patience and tolerance, not by borrowing a senseless phrase from Neo-con journalists and ideologists in D.C. who used “W” for their agenda to destroy MENA. Nor listen to those honey-tongues of the “Palace,” like BHL & Co.

As a result, if today those dystopians are causing collateral damage to the U.S. and European national security, recall it was the West that paved that silky road in 2003.  Later, in 2011, then-President Sarkozy used the same map in Libya, then handed it on to his successor President Hollande in the Sahel.

Premier Valls who has a Catholic heritage should preach with knowledge and not under the influence of opportunism. President Bush was also a religious man (Born-again Christian) who instead of launching a dialogue between East and West (such as the one started by President Clinton in the mid-90’s), read instead Albert Camus’ book, The Stranger (L’étranger).

I don’t know what Premier Valls is reading these days but one hopes he is not reading about “Westerners” killing “Easterners” for no reason. May be he should read The Case for Islamo-Christian Civilization by Richard Bulliet, in which the scholar argues that East and West are parts of one civilizational structure, and there is no room for any form of fascism. We are, surely, more siblings than strangers.

Ambassadors for Peace and Divisiveness: Nasr and Oren    Arab World