Evil is relatively rare. Ignorance is epidemic and the cure for that is journalism and expression Jon Stewart has reiterated regarding why he produced “Rosewater” which is based on the memoir Then They Came for Me by Maziar Bahari, which recounts Bahari’s 2009 imprisonment by Iran, after an interview with Jason Jones for The Daily Show, who Iranian authorities believed was an American spy.

Because of the events of 11 September 2001, a Media who were not asking my questions and government policies I dissented from, I began searching for answers and in the summer of 2005, made my first of eight trips to Israel Palestine.

Because if I can’t laugh it’s not my revolution, among my muses during my first 16 Days in Israel Palestine were Jon Stewart, Stephen Colbert and Steve Carell which began when Jon turned “our attention to religion” and Stephen raised “the God machine” as in this clip “brought to you by the Jehovah’s Witnesses” addressing gluten free communion wafers, evangelical Christian attorneys, Jews for Jesus and ends with a number on Stephen’s chakras. 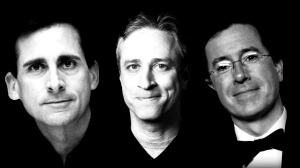 When Daily Show Correspondents Stephen Colbert and Steve Carell debated Islam vs Christianity in this “Even Stevphen” segment,

I had not yet learned the story of Israel’s Nuclear Whistle Blower, Mordechai Vanunu who said:

“Snowden is the best example of what I did 27 years ago – when the government breaks the law and tramples on human rights, people talk. That’s what he did, he speaks for everyone, and that’s what I did – I spoke for everyone.”– 25 December 2013

During my 2005 interviews with Vanunu, who had been released from 18 years behind bars to open air captivity the year prior, he asked me if I had ever seen the “DOROTHY Day” movie, “The Man who Knew Too Much” because the beginning scenes were shot where he grew up in Marrakesh, Morocco.

Vanunu meant to say Doris Day, but in that moment I realized my childhood dream to be a Brenda Starr [a comic book muckraker] had matured, for Vanunu’s slip of the tongue was the catalyst for me to begin to imagine following in the footsteps of Dorothy Day, the 20th century socialist muckraking agitator who became a Christian and a voice for the voiceless in her newspaper “The Catholic Worker” which persists today.

Within three weeks after my first trip to both sides of The Wall, I established WeAreWideAwake.org which has so far attracted over 14,000,000 visitors – the vast majority being USA and Israeli ‘cyber drones’.

I saw Vanunu last while I was in Jerusalem in November 2013. 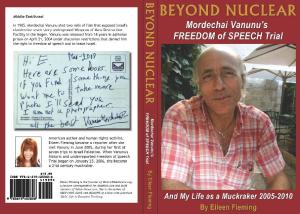 During that trip, I hand delivered some messages from his supporters at TNT/TellingNuclearTruths and a copy of the five page screen adaptation for Beyond Nuclear: Mordechai Vanunuʼs Freedom of Speech Trial and My Life as a Muckraker from which I excerpt:

Vanunu was born into an Orthodox Jewish home in Marrakech, Morocco in October 1954.

Our movie begins in a darkened movie theater and Doris Day is singing, “Whatever Will Be, Will Be (Que Sera, Sera).”

The lights come up and our camera is focused on the eyes of a boy about 9 years old. We follow him into the streets of Marrakesh –and into the very same scene where “THE MAN WHO KNEW TOO MUCH” began.

We follow Vanunu home and after ritual prayers the father tells the family they are moving to the “land of milk and honey.”

Vanunu is soon uprooted from his comfortable home and after a harrowing journey the family learns they have been banished to the ethnically cleansed Palestinian village of Beersheba-one of over 500 Israel has ‘wiped off the map’ since becoming a state in 1948.

Vanunu suffers his first crisis of faith and alienation from God and society shortly thereafter. At the same time, America mourns the assassination of President John F. Kennedy.

Eileen and Vanunu meet ‘by chance’ on the first evening of summer in 2005, after Eileen’s harrowing day in Hebron. A nurse by education, she is in the midst of writing her first book based on the memories of a 1948, Palestinian Muslim refugee from the Upper Galilee and her spiritual journey.

Vanunu is on his way out to a meeting as Eileen enters the courtyard at St. Georges Cathedral. Eileen has an experience of the presence of God…

Eileen first learns of Vanunu in 2004, while researching for her first book, KEEP HOPE ALIVE and writes him into it.

As her research continues her outrage increases over American policies that collude in support of Israel’s nuclear arsenal and military occupation of Palestine….

In January 2006, Vanunu’s FREEDOM of SPEECH TRIAL begins when the Jerusalem Magistrates Court charges Vanunu with 22 different violations, accusing him of breaking the law by communicating with foreigners 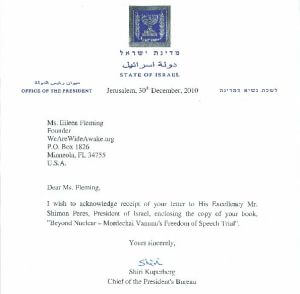 [meaning press] and trying to flee Israel when he took a cab to Bethlehem to attend Christmas Eve mass at the Church of the Nativity in 2004.

In June 2009, Eileen visits with Vanunu and when they say goodbye he tells her that he will not email her and she tells him, she will continue to email him because she wants SECURITY to know they cannot control the free flow of info or prevent anyone from following their conscience.

Eileen persists to report on the Internet that Israel refuses to allow Vanunu his right to full freedom because SECURITY has a vendetta against him and corporate media colludes in the injustice by their silence.

In November 2009, Vanunu suffers another crisis of faith and returns to atheism.

His freedom of speech trial concludes with a conviction on 19 charges and he is sentenced to 6 months in prison, which was eventually reduced to seventy-eight days in a high security prison in total solitary confinement during May to August in 2010.

When Vanunu is released from prison, he immediately reactivates his social media accounts, and posts a video message on Youtube:

“Everyone has the right to freedom of opinion and expression; this right includes freedom to hold opinions without interference and to seek, receive and impart information and ideas through any media and regardless of frontiers. -Article 19. UN Universal Declaration HUMAN RIGHTS which Israel’s statehood was contingent upon upholding! No shame on e, WeAreWideAwake: THE VANUNU SAGA 2005-2010!”

Vanunu readily replied: “No shame on Eileen, because Eileen is the best of using all her freedom of speech to the limits of using as a strong power to Bring my freedom.” 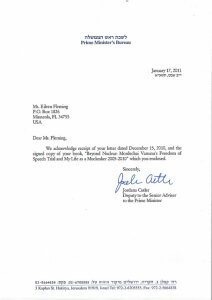 President Clinton responded with a public statement expressing concern for Vanunu and the need for Israel and other non-parties to the Non-Proliferation Treaty to adhere to it and accept IAEA safeguards. No American politician has uttered a word on topic since.

Vanunu told me that when I got a movie offer for Beyond Nuclear: Mordechai Vanunu’s FREEDOM of Speech Trial and My Life as a Muckraker 2005-2010 to let him know.

Our Arab identity is being smothered by our religion American Arabs