Today good news came by way of email from Sabeel Ecumenical Liberation Theology Center reporting on over 100 Christian, Jewish and Muslim faith leaders and community members who rose up against the role John Hagge’s tribe of Christians United For Israel/CUFI play in support of the illegal, immoral, and USA Government supported Israeli occupation of the indigenous Palestinians of the Holy Land.

Sunday’s email from Reverend Ateek at sabeel@sabeel.org under Subject: FAITH LEADERS DISRUPT U.S. VICE PRESIDENT MIKE PENCE DURING CUFI SUMMIT follows including a few of their photos, a video clip of the disruption, and link to this reporter’s gut wrenching experience of John Hagge’s tribe of Zions zealots who are infamous for heretical right-wing evangelism and disregard for equal human rights for ALL of God’s children.

Outside the summit, protestors blocked one entrance of the conference center, and later an intersection, reading out the names of Palestinian children who have been killed or injured by Israeli apartheid policies. Tarek Abuata, executive director of Friends of Sabeel North America, said of the action: “We are here to bear sacred witness and hold CUFI accountable to a theology of love.” The action was inspired by a coalition of organizations including Friends of Sabeel North America (FOSNA), Jewish Voice for Peace (JVP), American Muslims for Palestine (AMP), and US Campaign for Palestinian Rights (USCPR). 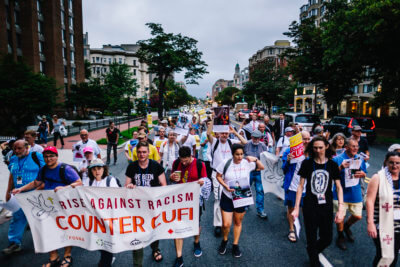 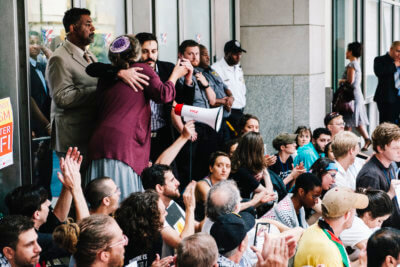 Reward offered in burning down of Michigan mosque American Arabs

The Rise and the Fall of the Prince: Fear & Cruelty Abdennour Toumi