On Thursday at Twitter President Trump overturned decades of US policy when he declared that America should recognize Israel’s authority over the occupied Golan Heights.

This American’s trip to the Golan Heights excerpted from the screenplay “This American and Israel’s Nuclear Whistle Blower Vanunu Mordechai” concludes this article.

Trump’s Golan Heights tweet is symbolic of his disregard for diplomacy and the rights of indigenous people.

Prime Minister Netanyahu called Trump to thank him after his Golan Heights tweet stating, “He did it again. The message that President Trump has given the world is that America stands by Israel.”

Netanyahu again praised Trump for moving America’s embassy to Jerusalem and for withdrawing the U.S.A. from the Iran nuclear deal.

Mr. Trump’s Israeli policies are popular in Israel and with his spineless core in Congress, but Trump’s moves have been globally condemned.

The United Nations rejected Israel’s occupation of the Golan Heights in 1967, after Israeli troops seized 400 square miles of highlands from Syria during The Six Day War.

Israel had planned on capturing the Golan Heights on 8 June 1967, but the USS LIBERTY got in their way; so Israel attacked the Liberty that day and invaded Syria the next.

It has been reported that Israel attacked the USS Liberty [America’s then premier surveillance ship] to prevent the USA from learning about Israel’s intentions to seize the Golan Heights and their preparations within Israel’s nuclear reactor facility at Dimona.

Next week Trump will host Netanyahu at an Oval Office dinner meeting. Bibi has campaigned for the release of convicted spy, Jonathan J. Pollard a former USA intelligence analyst. It has been reported that Trump is considering allowing the convicted spy to travel to Israel.

In 1987, Jonathan J. Pollard was convicted of spying and providing Israel with top-secret classified information. Pollard had been sentenced to life in prison for violations under the Espionage Act but was paroled in 2015 under a restricted travel ban.

Pollard is a heroic figure in Israel for spying on America while Israel’s nuclear whistle blower Mordechai Vanunu is demonized.

What follows is an excerpt from my first screenplay This American and Israel’s Nuclear Whistle Blower Vanunu,  regarding my trip to the Golan Heights.

THIS AMERICAN is seated next to RACHEL the female Israeli guide, who is a friend of the Jewish American co-founder of the OTFFP, and in back of DAVID — who is tall and movie-star handsome.

THIS AMERICAN
So, tell me how a twentyfour-year-old from Nashville decides to move to Israel, where she knows no one. What made you do it, and how has it been these past seven months?

RACHEL
My friends got so tired of me complaining about my political frustrations over the last election; they said, ‘If you don’t like it here, just leave!’ I had already been considering joining the Peace Corps, and when I got turned down because of a medical problem, I explored the possibility of going to Israel. I learned about, Aliyah, which means ‘going up,’ and the deal was hard to pass by. I get fifteen hundred shekels or about thirty-six hundred dollars a year in increments to help with my expenses. I can apply for unemployment benefits after seven months, as long as I look for a job. I just completed Ulpan, which was five hundred hours of Hebrew language immersion studies that took five months, five hours a day, for five weeks. I get subsidized rent and just moved out of the Absorption Center Projects. All the new immigrants get room, utilities, and three meals a day for the first five months in Israel. We also receive free medical care and all the doctors here are dedicated. We can go to the university with 100 percent of the tuition paid by the government. College is much cheaper here; it’s about three thousand to four thousand dollars a year. Until I am thirty years old, I can receive up to three years of education for my master’s degree…

THIS AMERICAN [TO SELF]  If  I were a young American offered that opportunity I’d be nuts not to consider it.

DAVID
My mother is fourth-generation to this land and my father was born here while this land was still called Palestine. So, I am a forty-two-year- old Israeli-Palestinian secular Jew. In 2000, when Ariel Sharon went to the Al Aqsa Mosque and provoked the violent uprising, I cried, ‘Back off, man! Enough! It is enough already!’ When those young Palestinian innocents were killed, I knew I had to do something. I didn’t know what, but I began by knocking on doors throughout Rosh El Aim, a Christian- Arab community. I told them I just wanted to help. Mostly they thought I was crazy and many today think it too. I drove a three hundred mile radius, knocking on doors, offering to help… One day, I was sitting with a bunch of Bedouin kids, and I began tapping my fingers on my thigh. The next thing, all of these kids were imitating me, and I realized I could bring them drums. I have friends who are musicians and artisans, and they have all offered an open hand. Without any assistance from the Israeli government, we have established centers of peace/ shalom/salaam that offer tutoring, health care, folk dance, music lessons, and artistic projects to the least and easily forgotten. We have built community between Israeli Jews and Bedouins, and Palestinian Christians and Muslims. It’s been five years now, and I continue to make daily rounds all the way into the Golan Heights. Many others have joined in and are keeping the projects moving forward, as I take on new ones. I have a friend named Hagit Breittman, a Jewish woman who has done the unthinkable! She opened her home to Bedouin woman, and they get together weekly to sew and, more importantly, to be a community. Right now, we are building community here, for security comes from community, not walls and gates! We absolutely have hope that one-day; these Bedouin women will travel to America with their embroidery and weaving. Hagit also started up a daily lunch service for the poor in the community. She provides food and comfort for hundreds everyday, and has done it all without government assistance. Today, people are lost in a violent cycle without basic human rights and respect for the other. Forget co-existence, we must have basic existence, basic human rights. People need to be taught morals, boundaries, limits, and manners. Isn’t that the stuff Jesus taught?

The group falls silent until they reach an elementary school in the Golan Heights where the OTFFP provided the funds for two thousand trees. A young slender smiling man emerges from the school just as the group emerges from their bus.

MONEER SABAGH
Welcome America! We are grateful you arrived safely and anxious to show you around, so please stick close to me and come and see the trees you provided us… I am in a delicate situation. The Israeli government built our school, but the community here is occupied, and resentment runs high. I am trying to get the people to care about what we have and enrich it, so we can thereby enrich ourselves! Because they are occupied, they struggle with the question of how they can thrive under captivity. It is a difficult situation to understand–what life under occupation is about. I thank the Olive Trees Foundation for Peace for providing the two-thousand trees David brought to us. We needed oaks and pines for the school campus and they have made a difference in our atmosphere, in the air we breathe… 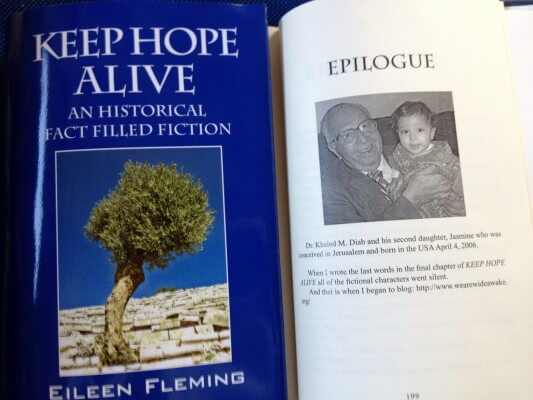 This American’s second screenplay, This American and The USS Liberty: A Love Story is in process!