Vice President Michael Pence, representing President Donald Trump, held its first meeting on Monday Jan. 30, 2017 with His Majesty King Abdullah II of Jordan for a working breakfast at the Vice President’s Residence at the Naval Observatory this morning in Washington D.C.

One of the top priorities was to address the peace efforts between Israel and Palestine, and to discuss the 1995 legislation requiring the U.S. Government to move the U.S. Embassy from Tel Aviv to Occupied Jerusalem. President Tump vowed during his campaign to move the embassy on his first day, but since his election, he has changed his position. The move is now being reviewed.

King Abdullah is the first foreign leader that the Vice President has hosted at his personal residence.

The Vice President thanked the King for his efforts to advance peace and stability in the Middle East and reaffirmed the United States’ commitment to Jordan’s security and economic development.

The two leaders discussed events in the region, including ways to accelerate the Coalition’s efforts to defeat ISIS and promote a political solution to the Syrian conflict. They also discussed the King’s views on potential changes involving the U.S. Embassy in Israel and how best to make progress towards a comprehensive agreement between Israel and the Palestinians.

The Vice President and King Abdullah agreed on the importance of continuing to strengthen the US-Jordan partnership, and pledged to stay in close touch on events in the region. 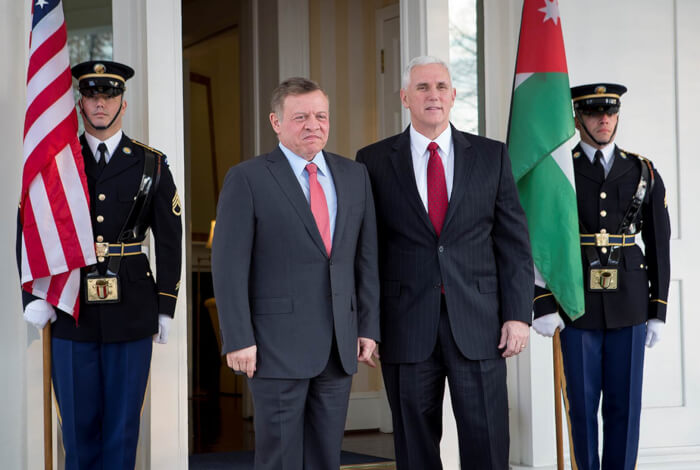 They discussed recent developments in the Middle East, including the fight against ISIS and joint efforts to address the conflict in Yemen and elsewhere in the region. The President also raised the idea of supporting safe zones for the refugees displaced by the conflict in the region, and the Crown Prince agreed to support this initiative. The President and Crown Prince closed by underscoring their commitment to close consultations on issues of mutual concern.

The President requested and the King agreed to support safe zones in Syria and Yemen, as well as supporting other ideas to help the many refugees who are displaced by the ongoing conflicts. They also agreed on the importance of rigorously enforcing the Joint Comprehensive Plan of Action with Iran and of addressing Iran’s destabilizing regional activities.

President Trump voiced support for the Kingdom’s Vision 2030 economic program. Both leaders expressed a desire to explore additional steps to strengthen bilateral economic and energy cooperation. The two leaders also discussed an invitation from the King for President Trump to lead a Middle East effort to defeat terrorism and to help build a new future, economically and socially, for the people of the Kingdom of Saudi Arabia and the region. The President and King Salman closed by underscoring their personal commitment to continued consultations on a range of regional and bilateral issues.