On Wednesday The Vatican concluded its first treaty that formally recognized the State of Palestine.

The treaty signals that the Holy See has switched its diplomatic recognition from the Palestine Liberation Organization to the State of Palestine and it concerns the activities of the Catholic Church in Palestinian territory.

A senior official at the Foreign Ministry criticized the Vatican’s move stating:

“Israel was disappointed to hear about the Holy See’s decision to agree on a final text of an agreement… with the Palestinians, that includes the term the state of Palestine. This move does not advance the peace process and further distances the Palestinian leadership from returning to direct and bilateral negotiations. Israel will examine the agreement and weigh its actions accordingly.”

The Vatican’s foreign minister, Monsignor Antoine Camilleri, acknowledged the change in status, given that the treaty was initially inked with the PLO and is now being finalized with the “State of Palestine.” But he said the shift was simply in line with the Holy See’s position.

During Pope Francis’ 2014 visit to the Holy Land, the Vatican’s official program referred to Abbas as the president of the “State of Palestine.” 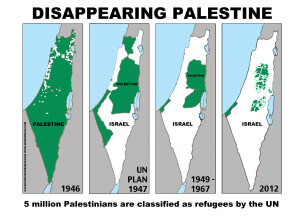 May 15th commemorates the displacement of 750,000 Palestinians and the ‘wiping off the map’ of over 500 Palestinian villages which followed the day after Israel’s Declaration of Independence was signed which promised:

THE STATE OF ISRAEL…will foster the development of the country for the benefit of all its inhabitants; it will be based on freedom, justice and peace as envisaged by the prophets of Israel; it will ensure complete equality of social and political rights to all its inhabitants irrespective of religion, race or sex; it will guarantee freedom of religion, conscience, language, education and culture; it will safeguard the Holy Places of all religions; and it will be faithful to the principles of the Charter of the United Nations…– May 14, 1948. The Declaration of the Establishment of Israel

As Don Hewitt instructed his “60 Minutes” staff to, “Tell me a story. The formula is simple and it’s reduced to four words every kid in the world knows: Tell me a story. It’s that easy.”

The wailing of families throughout Majd Al Krum could be heard for miles that cold night in October 1948.

In single file, under the cover of darkness, Khaled, his sister, two cousins and hundreds of neighbors guided by only the light of a crescent moon trekked through the Galilee to Lebanon fearing for their lives, for the Israeli army had surrounded their village.

Twenty-one hours later they reached the town of Bint Jubayl and the family joined the end of a queue at a water well. The landowner offered them drink and hard crusts of bread and Khaled told him of their twenty-one hour odyssey of terror. Their host sighed and shrugged, then handed Khaled a blanket and pointed them down the grove where they could sleep amongst thousands of other Palestinian refugees. When they found an unoccupied olive tree they spread the blanket atop the dirt and roots and huddled together beneath the tree’s broad canopy and fell into an exhausted sleep.

The next day, a mile from the grove, the young family found a vacant, unfurnished room in an unfinished building and sat down. For two days, they moved in a cloud of unknowing as more refugees flooded into Lebanon. On the third day Khaled announced, “We must move on. I say we go to Damascus. I have my teacher’s certificate with me. I will teach the children of wealthy merchants, and we will eat and sleep without fear until we can return home.”

He smiled, remembering the fierce joy of Khaldiyeh and Latifah when they erupted into song and dance, and Little Mo asked, “Why not?” It was their first laugh since leaving home.

The only transportation available was a decrepit old train that had once carried livestock. Hundreds of refugees were packed in like standing sardines and people relieved themselves and vomited all around the young family. After five hours, Khaled noticed the girls looked ready to pass out and announced that they must all jump off.

“I will count to twenty, and then we must all jump at the same time. Are you ready?”

The girls were visibly trembling, but nodded yes. Little Mo appeared stoic, but quaked within. Khaled counted slowly as they all stood at the edge of the open car holding hands. When Khaled screamed “twenty,” he, Little Mo, and Latifah jumped, but not Khaldiyeh!

With astounding power Khaled ran after the train, climbed back aboard, grabbed his sister, picked her up, and jumped off once more. The siblings were scraped and bruised, but grateful to get off that wretched train. They all laughed for the second time since they had fled Majd Al Krum.

The young family walked the remaining mile to Beirut, where they spent the night wide awake in a bus depot, waiting for their ride to Damascus. They were filled with idealistic, youthful hopes, until their connection arrived, carrying thousands of dazed and confused Palestinians.

After disembarking from the long, silent ride, Khaled led his family into a dingy gray Damascus neighborhood. He was able to afford a few nights in a sparsely furnished attic room. On the third day, he ventured alone into the center of the cradle of civilization.

The Damascus streets sights and smells overwhelmed Khaled’s senses. His gait slowed to a shuffle as he inhaled and savored the pungent spices of meats and the sweet perfume of fresh fruits. He stopped at a booth displaying rugs and despaired at the thought of his family sleeping another night on a bare floor.

With a crooked smile the Syrian merchant inquired, “Which carpet is it that you desire?” Khaled pointed to the thinnest scrap and asked “How much?”

“Only 125 Syrian liras. It is a bargain, and it is a fine eye you have for excellent quality. I see you are a smart young man, who will not pass up my gracious offer.”

Khaled never had experienced such a verbal assault from any of the merchants in his hometown, and blurted out, “I have twenty-five Syrian liras.”

The rug merchant’s face clouded over with concern, and he asked, “Ah, young man, are you a refugee?”

The merchant smiled broadly as he extended his palm to receive all that Khaled had and effusively expressed, “I am so very sorry for all of you refugees. My dear boy, I will lose a lot by accepting your offer. But I feel so sorry for you. I will suffer the loss to make a poor refugee happy.”

Khaled ran and danced his way home, proudly carrying the scrap of wool high above his head. The young family danced with joy on top of their new rug until a booming knock on their door startled them into silence. Khaled opened the door and in popped their landlady, “Just what is all the commotion about? I thought you were coming through the ceiling; you all made so much noise,” she complained.

Khaled proudly pointed to the rug and told of the excellent bargain he had made. The landlady stood upon the scrap and sniffed twice. She spoke through a smirk, “Oh, I have the same rug and paid only nineteen Syrian liras for it.”

One month after fleeing their comfortable home in Majd Al Krum the family traveled on bus and train for the two day journey to Khaled’s new job as a math teacher in the town of Hasaka, Syria.

The train was unheated, and the bus carried people, goats, sheep, and chickens that spilled out from all sides. They traveled on rocky dirt roads and saw only homes made of mud. By midnight, they arrived at the town of Hasaka and checked into the nearest hotel. Khaled was aghast when he opened his thin wallet and handed over the first night’s rent. They were now out of money.

Their senses were assaulted by the damp, musky smell that permeated the tattered building on the way to their room furnished with only four thin mattresses on a wooden floor, a chipped table, a cracked water pitcher, and a naked light bulb set in an old wine bottle. The three fell asleep immediately, but Khaled remained wide awake engulfed by dark, tormenting thoughts of suicide and homicide in those last few hours before he reported to his first day on the job.

At three AM, the door shot open, and in charged two Syrian policemen. The girls screamed and the police accused them of prostitution. In fear and trembling, Khaled recounted the events of the past month as the police examined their papers and it was nearly dawn before the police were satisfied and left.

Khaled’s dark mood turned bitterer with every step towards the school building on that frigid damp morning. He sighed and fumed as he waited for the Principal, Mr. Hamza to arrive. When he did, Khaled could barely mumble a greeting and followed the regal Kurd in a daze, to his classroom where Mr. Hamza introduced him to the students, waved and left.

Khaled looked into the eyes of thirty adolescent boys, picked up the math book and demanded to know just what they did and did not know. The bravest boy in the class blurted out indignantly, “What is your problem? We just want to learn, not fight with you.”

Khaled retorted, “You all may be too stupid to learn anything, but I will try.”

At the end of the school day, the students cut and ran from Khaled and descended upon Mr.Hamza’s office demanding he fire the new math teacher. After hearing them out, Mr. Hamza found a trembling Khaled sitting in the darkened classroom and softly inquired, “What happened in here? Is it money? Do you need money?”

Without waiting for a reply, Mr. Hamza opened his wallet, took out a month’s worth of wages, and handed it to Khaled.

“Now Khaled, go home, feed your family, and get some sleep. And make sure you report back to work tomorrow morning. Don’t thank me, but help another whenever you can…”

This Land is Your Land: God Blessed America for Me American Arabs

Muhammad among the top 10 baby names in 2019 American Arabs