Anti-EU leaders driven by anti-Muslim, anti-immigration racism in Europe join push to leave EU. “I come to bury Caesar, not to praise him, but for my own part, it was Greek to me.” In politics, making a populist decision that politicians might think it is a big deal, though the domino effect may be drastic for the country.

Anti-immigrant, anti-Islam opposition leaders in Europe didn’t wait to demand their countries’ to “leave” the European Union. In the wake of the Brexit result, Marine Le Pen, leader of the far-right Front National, called for a similar referendum on France’s E.U. membership. France is more involved in the E.U. than the U.K. and is considered one of the six E.U. founders and advocates.

The FN, an Islamophobic party, has called for an E.U. referendum in France following the U.K.’s vote in favor of leading the Union. Ms. Le Pen, a member of the European Parliament in Strasbourg, is also the natural candidate for her party in France’s 2017 presidential election.

One of the hawkish anti-European parties in the Union, the Front National is calling the popular manifesto “a democratic necessity.”  “The British people have given to Europeans and to all the people of the world a shining lesson in democracy,” Ms. Le Pen said. “A victory for freedom. We now need the same referendum in France and in E.U. nations.”

On Thursday, British people voted to leave the 28-nation E.U. membership, pushing Prime Minister David Cameron to announce his resignation, facing the biggest blow to the European project of greater unity since World War Two.  Unlike the U.K., France uses the euro currency, is also a member of the open-border Schengen zone, and has a special status deal in the E.U. agricultural policies.

So France has been calling for decades for common foreign and defense policies in the E.U., ironically with the U.K. 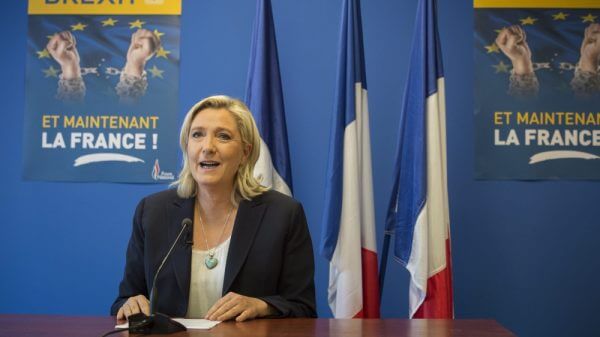 Yet, according to recent polls, two-thirds of the population view the E.U. unfavorably.

Chirac expected an easy victory, and moreover thought it would do much to cement his legacy as a French statesman.

Thus, Chirac and the Socialists’ establishment faced ardent objections to the Constitution’s ratification, which broadly divided the political parties into two camps. On the left, many expressed the view that the Constitution would enforce a neo-liberal economic model.

Among those were  some members of the Socialist Party, who dissented from the party’s stance as decided by its internal referendum. Some members of the Green Party (though the party’s official policy was also to support ratification), the Communist Party, the Citizens & Republican Movement of Jean Pierre Chevenement, an Arabist politician, and other small parties allied with the Socialist Party mere, like the radicals of Ms. Taubira.

Other hard-line far-left parties and unions such as CGT expressed severe criticism and sought to link the Constitution to the proposed directive from Brussels as having a direct impact on French workers’ social rights.

On the other hand, there were also prominent opponents to the Constitution from the right, notably Nicolas Dupont-Aignan, a Gaullist, and Philippe de Villiers of Movement for France, another reactionary and Islamophobic politician, and the racist Jean-Marie Le Pen (Marine’s father) of the FN, who opposed the Constitution on the grounds that France should not be part of any institution, whose decisions can take precedence over what is decided in France at a national level.

Another factor in the defeat of the Constitution may have been the linking of the Constitution in the minds of voters with the possibility of the integration of Turkey to the E.U. A political note, yesterday President of the LR Party, Nicolas Sarkozy, did not miss the opportunity to add his rhythmical political statement on the Brexit vote.

On Turkey’s E.U. full integration, most of the French population and leaders right and left alike are opposed.

A referendum for a “Frexit” that Marine Le Pen and her movement are calling for is more a populist one to destabilize France’s establishment and create a panic strategy for President Hollande, who seems totally lost in his message and policies on how to deal with such a survival matter for Europe.

He has been dancing the tango, one step ahead-two behind, trying to contain the racist party by sending senseless signals on his migrants’ and refugees’ policy.

In this stance regarding the refugees camps in Calais, Mayor Natasha Bouchart has declared she wants the French government to consider renegotiating the Le Touquet treaty between the U.K. and France.

Speaking after Britain voted to leave the European Union, Mayor Bouchart said France should consider suspending the agreement which allows British border guards to check on French soil for illegal immigrants stowing away on lorries, cars and trains before they head through the Channel Tunnel and onto ferries.

During the referendum campaign, which saw the “Leave” side victorious with 52% of the vote, Eurosceptics said the presence of immigration checks on the French side of the border would not be affected as Le Touquet treaty was separate from the E.U., wide rules on the free movement of people.

Officially Le Touquet treaty, which was signed in 2003, is a bilateral agreement between London and Paris, which remains valid even if Britain leaves the Union.

Thousands of refugees fleeing war in Mali, Libya, Syria and Iraq made the exodus journey across the Mediterranean and over land borders to get to Europe.

There are around 6,000 people living in the camps or “the jungle” (pejoratively called by the humanitarian NGOs) outside Calais and Dunkerque as they desperately trying to cross over in trucks and on trains to reach Britain.

Far-right parties in France, Greece, Italy, Germany, Belgium, Sweden, and the Netherlands are claiming victory and are using Brexit’s example to recruit. These reactionary nationalist movements, which have been gaining political strength and societal presence in recent years use the “fear factor” argument putting the blame on the E.U. immigration policy and the high rate of unemployment among the white population in their respective countries.

Instead of blaming the neo-liberal economic policies, harsh austerity measures and the hypocritical refugee policy attitude that have made the lives of working people throughout the continent complicated, consider the counter argument of the anti-establishment movements of the Mélenchon (PRG) in France, Podemos in Spain, M5S in Italy and Syriza in Greece, who are calling for a referendum to reform the Union rather than dissolve it.