Just days after Mr. Trump ignited the “running war’’ with the media, chief White House strategist, Stephen K. Bannon, poured some gasoline on that fire arguing that news organizations had been “humiliated” by the election outcome and repeatedly describing the media as “the opposition party” of the current administration. 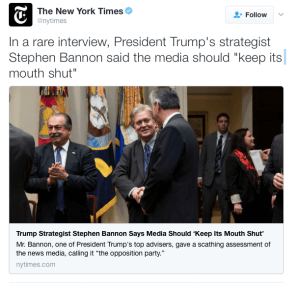 In his interview with The New York Times, on Wednesday Mr. Bannon said: “The media should be embarrassed and humiliated and keep its mouth shut and just listen for a while. I want you to quote this: The media here is the opposition party. They don’t understand this country. They still do not understand why Donald Trump is the president of the United States.”

Democracies thrive on dissent. A patriot stands by their country NOT any president. The Media’s mission is to CHALLENGE politicians NOT take down dictation! A citizens responsibility is to be politically engaged —and that is what is fueling #PussyPower #TheResistance #WomensMarch 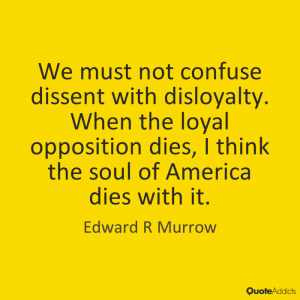 Mr. Bannon added that he has been a reader of The Times for most of his adult life.

Mordechai Vanunu will again ask for his freedom from Israel: on Monday 30 January 2017 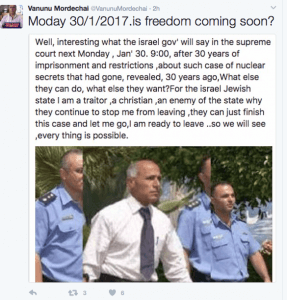 The TIMES published the photos with a front page story on 5 October 1986, just as Mossad agents were kidnapping Vanunu from Rome back to Israel for a closed door trial.

In 2004, Israel TV broadcast Vanunu’s photos of Dimona in 3D

Vanunu republished it at youtube without the sound because he was NOT speaking in Hebrew from the day he stepped out of 18 years in prison on 21 April 2004: UNTIL he spoke in Hebrew to Israel TV in 2015, essentially to take his case to the Israeli public:

I GOT MARRIED THREE MONTHS AGO. I CAN’T GET A JOB HERE, SO SHE IS THE BREADWINNER. I WANT TO LIVE MY LIFE, START MY LIFE ANEW. I’M FINISHED WITH THIS ENTIRE [NUCLEAR] STORY, AND I’VE SAID THIS HUNDREDS OF TIMES. I HAVE NO MORE SECRETS TO TELL, AND I WANT THEM TO LET ME LEAVE AND GO LIVE ABROAD WITH MY WIFE, AND THAT’S THE END OF THE STORY.

The outcome of that trial resulted in Vanunu serving 78 days in solitary confinement in 2010.

Vanunu is also scheduled to return to court in March for the sentence on his July 4th indictment.

He was charged with speaking to two foreigners- in 2013- and acquitted on two other charges.

Unless Israel actually frees Vanunu next Monday, Vanunu most likely will again break his own news at his TWITTER and Facebook Wall.

Thank you for your consideration in following this story.

THIS AMERICAN is Eileen Fleming, Author, Producer “30 Minutes with Vanunu” is the Senior Non-Arab Correspondent and Health Reporter for TADN, she ran for US HOUSE in 2012 on a Platform that included ending federal regulations on cannabis, to establish every June 8 to be known as USS LIBERTY Remembrance Day, and to end USA collusion in Israel’s nuclear deceptions and military occupation of Palestine.

LEARN ABOUT THIS AMERICAN Documentary HERE

Trumpmadinejad? Not until 2020 Activism
Egypt slides from Democracy into oppression Arab World Politics