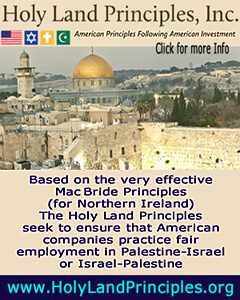 Intel, the multinational technology company headquartered in Santa Clara, is being pressed to sign the Holy Land Principles— a corporate code of conduct for American companies doing business in Israel-Palestine. The 8-point set of Principles is based on the Mac Bride Principles that have proven so effective in Northern Ireland.

Underrepresented Minorities
Last September Intel announced a $6 billion investment (for which it got 300 Million in government grants) in Israel, where the serious problem of “underrepresented minorities” in the hi-tech workplace has been acknowledged by such industry leaders as Cisco in their 2012 Corporate Sustainability Report: “Arab citizens constitute 20 percent of the population in Israel, but make up less than 0.4 percent of the high-tech industry workforce.” Such 50:1 inequality of outcomes for Israel’s Arab citizens, if operative instead for African-Americans, would read “Black citizens constitute 12 percent of the population of the United States, but make up less than 0.24% of the high-tech industry workforce.”

Largest Private Sector Employer
Intel is Israel’s largest private sector employer, with over 10,000 employees. Since Israel’s Occupation of the West Bank in 1967, Intel has invested $10.8 billion in plants and development centers in Israel, and received $1.5 billion in related grants (Reuters, September 22, 2014). Israel’s Finance Minister Yair Lapid said in a statement “Intel’s investment is a strategic asset for Israel’s industry…. This is the biggest investment by a foreign company ever in Israel.”

Fr. Mc Manus said: “Signing the Holy Land Principles would be the perfect way for Intel to demonstrate that their CEO, Mr. Brian Krzanich, meant what he said in his speech on January 6 to the International Consumer Electronics Show (International CES) in Las Vegas: ‘I’m here to say tonight, it’s time to step up and do more. It’s not good enough to say we value diversity and then have our workplaces and our industry not reflect the full availability and talent pool of women and underrepresented minorities.'”

Fr. Mc Manus concluded: “Furthermore the easiest and most transparent way for a company to convince investors, consumers and other stakeholders, that it is proud of its fair employment record is to release a statistical breakdown of its workforce according to national, racial, ethnic or religious identity. Intel should do that immediately — in a way consistent, of course, with respecting personal privacy and security.”